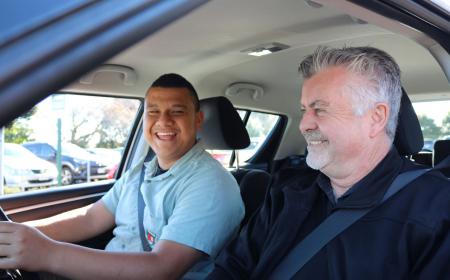 AA Driving School and Manukau Institute of Technology (MIT) have launched a new programme which will help Trades and Hospitality students gain their driver licences – so greatly improving their chances of employment.

Covered in the Winter issue of AA Directions which is out now, the MIT Accelerate Driving Training Programme sponsored by AA Driving School will provide up to 75 MIT students with three free driving lessons with an AA Driving Instructor.

The AA is also training four MIT staff members to facilitate the Defensive Driving Course, which can reduce the time it takes to get a full licence by six months, and will provide one year free AA Membership to each Accelerate participant who obtains their full licence by the end of June 2019.

“Not having a driver licence can be a significant barrier to employment,” he says.

“We want to help students on their driver training journey, so they’re not held back from getting a job simply because they don’t have a licence.”

A joint ACC and Auckland Chamber of Commerce study in 2014 found that a young person with a full or restricted licence is three times more likely to secure employment than those without.

MIT Chief Executive Gus Gilmore says that not having a licence is a definite hurdle for students in trades subjects where driving is an essential part of apprenticeships and jobs.

“We know that around 30% of trades jobs posted at MIT require a driver licence,” says Mr Gilmore. “We also know that to get to and from many jobs in Auckland require both a car and licence, so this programme is critical.”

“Getting my licence will open up a lot of opportunities and will give me a much better chance of getting a job,” says Lawrence. Kevini has similar feelings, saying that the programme will help him with his apprenticeship and his future.

The AA will coordinate staffing levels at the local AA Centre in Manukau to streamline applications and driver licensing testing for Accelerate participants.

The Accelerate programme is another step for the AA in supporting young drivers. Since 2014, the AA has been providing three free driving lessons with an AA Driving Instructor to learner licence holders who are AA Members or have a family member who is an AA Member via the AA Ignition programme.

As of February this year, AA Ignition had saved learner drivers more than $10 million in lessons.

The Winter issue of AA Directions is currently being delivered to the letterboxes of AA Members and is on the AA Directions Website.