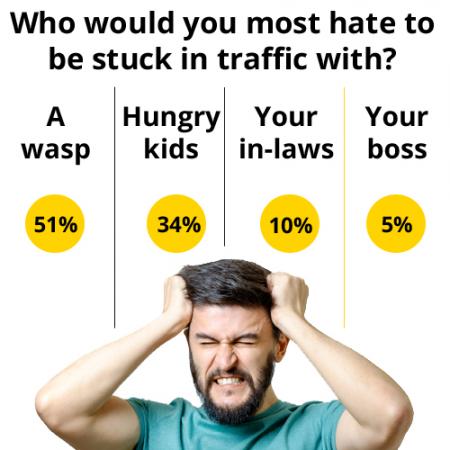 There are much worse fates than being stuck in traffic with your boss, Kiwi drivers say.

The AA recently tried to bring some humour to the subject of congestion by asking through Facebook whether people would most hate to be stuck in traffic with hungry kids, their in-laws, their boss or a wasp.

The preferred choice turned out to be the boss while the wasp was hands-down regarded as the worst companion, followed by hungry kids.

AA spokesman Barney Irvine says the question was part of a poll designed to provide insights into people’s personal experiences of congestion.

“Over the last year we’ve set up a congestion monitoring tool, and this gives us fantastic hard data on how long trips are taking in Auckland, Wellington and Christchurch. We wanted to balance that with data on what people are thinking and feeling.

“We actually ended up feeling a bit bad about the wasp question because it turns out that quite a few people have had nasty experiences – and even crashes – as a result of finding a wasp in their car.”

The AA also asked Facebook users what caused the biggest delays to their normal commute out of wet weather, roadworks or a minor crash ahead of them. Roadworks was seen as the biggest delay-maker by 50% of respondents, with the rest of the votes an even split between the other two options.

“What this reflects is the scale of the roadworks in cities like Auckland and Christchurch,” says Mr Irvine. “Auckland has major roadworks on key corridors like the Southern and Northwestern Motorways, while Christchurch has had constant – and constantly changing – roadworks all over the city since the earthquakes. This has taken its toll on motorists.”

Mr Irvine says that even small-scale roadworks would reduce traffic throughput by 5% or more.

“So you can imagine the impact once they start taking up a lot of lane space to dig up the road.”

Meanwhile, 77% of respondents said that the evening commute was more congested than the trip to work.

“People generally do a lot more driving in the evening – picking up kids, doing the shopping, going to the gym, and so on – and that adds up to more congestion,” says Mr Irvine. Our data shows that the trip home can often take 10-20% longer than the trip to work.”

There’s also a psychological element, with delays on the trip home eating into precious time with the family.

Mr Irvine says that further Facebook polls on congestion issues are planned over the next couple of months.