The four tips below are simple ways every driver can help make our roads safer for themselves and all other road users.

It goes without saying that these are in addition to all drivers needing to obey the road rules and wear their seat belts, to not speed and not drive drunk or after taking drugs.

At a national level, the AA is working hard to get more investment in improving our roads and having laws that deliver better road safety but every driver can take action in their day-to-day lives to contribute to New Zealand’s Decade of Action for Road Safety, which aims to significantly reduce the amount of people killed and injured on our roads by 2020. 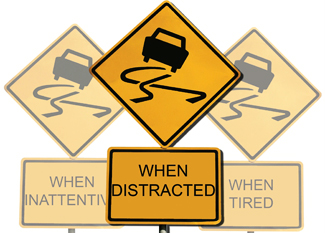 By putting video cameras inside cars and recording drivers for long periods of time, a major US study found that in 80% of crashes the drivers had taken their eyes off the road sometime in the three seconds before the incident. This could have been due to being distracted, tired or just looking away.

The same researchers have now recorded nearly 1 million hours footage of real-world driving and found that as long as drivers see an object, they almost never hit it so the more you keep your eyes and mind on the road the safer you will be.

If you use your cellphone when you drive or are prone to other distractions like reaching for things in your car, eating, adjusting your clothes, or putting on make-up, try to break these habit and pull over if you really need to do something else.

Simply being more conscious of when your attention is diverted can help you stay more focussed. Become aware of the times you do something like read a sign in a shop window or look at something outside the car and try and cut them down. If you have passengers, keep your eyes on the road rather than turning to look at them when you are talking.

People who drive in a fuel-efficient style have been found to have less crashes.

The key things to bear in mind are looking well ahead and anticipating any actions you need to take in advance. This will enable you to drive smoother with no hard braking or accelerating. Keep at least a two-second following distance so you have more time to react and can slow down gradually rather than coming to an abrupt halt. If you drive a manual, change up gears early (at about 2500 rpm) to use less fuel and in an automatic accelerate with a light throttle.

By driving in this fashion and keeping your tyres fully inflated, keeping your windows up and removing any unnecessary baggage from your car, you will not only be safer but also knock 5% or more off your fuel bill. That’s the equivalent of paying at least 11c-a-litre less for petrol.

3. Buy the safest car you can afford

Regardless of your budget you can make choices that means your car is safer for you and for your passengers in the event of a crash.

A quick internet search can tell you in most instances what safety rating a car has. The AA website has safety ratings for used and new cars.

For used cars, safety ratings are established by measuring the relative safety performance of many used cars based on crashes on NZ and Australian roads. Vehicles are given a safety rating out of 5 stars – with 5 being the best rating.

When buying a used car safety features that you should look for include ABS braking, airbags, electronic stability control and rear seat three point seat belts.

Newer vehicles are safer. Generally newer cars have technological improvements that protect drivers and passengers better in the event of a crash. Crash tests are a way of assessing what will happen in the event of a crash. The AA supports the ANCAP safety testing programme for new car crash testing. Before you buy insist on knowing the safety rating of your vehicle.

When buying a new car you should consider vehicles with a safety rating of 4 or higher.

4. Driving tired is a killer

Some of the world’s leading road safety researchers have found that a tired driver and a drunk driver have close to the same risks of crashing.

As soon as you start feeling drowsy or notice you are blinking more, yawning, daydreaming or drifting in your lane the ideal solution is to stop driving straight away and have a decent rest, however this often isn’t possible.

One option is to pull over somewhere safe and take a ‘power nap’ for 15-20 minutes. Don't go longer or your body can start to enter deep sleep and leave you feeling even more tired.

Having a banana and some water can have a positive effect while a coffee or other caffeinated drink can give you an energy spike but it will take some time for the caffeine to be absorbed into your system and people that regularly consume these types of drinks may not get much stimulating effect.

These are strictly short-term fixes and trying to push on when you need rest is just not worth the risk to yourself or others on the road.

Not trying to drive too long a distance in one go will help reduce your chances of getting fatigued as well as  avoiding driving at times when you would normally be sleeping or when you are likely to be drowsy, like straight after a big meal or if you are taking medication that has drowsiness as a side-effect.

If you have other people in the car, share the driving load between you.