The inaugural AA Driven New Zealand Car of the Year Awards bestowed the country’s most prestigious award to the groundbreaking high-tech Mercedes-Benz A-Class. 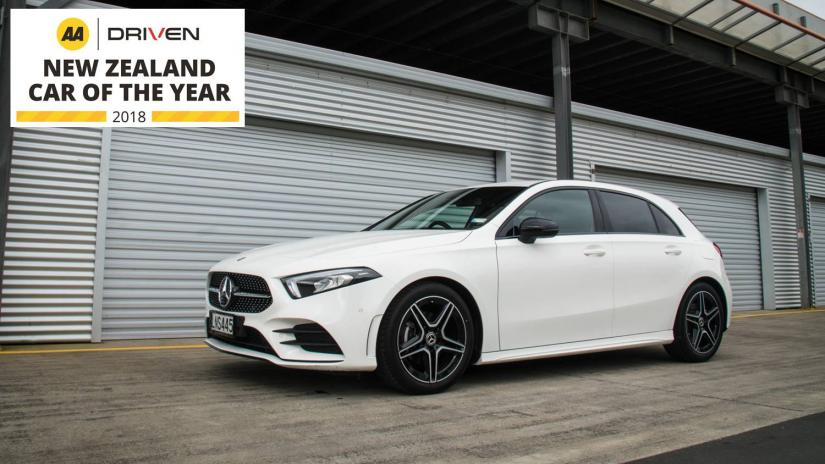 The winner was revealed at a cocktail event on Wednesday, December 12 attended by the who’s who of the motoring industry in Auckland, and decided by a panel of judges drawn from the country’s finest motoring journalists and the AA.

Also revealed was the Best in Class winners, including EV, and the Safest Car along with People’s Choice.

The Mercedes-Benz A-Class took the title of AA Driven New Zealand Car of the Year due to built-in Artificial Intelligence technology and unparalleled driving experience.

The A-Class has “Hey Mercedes” with virtual genie action that responds to voice commands for tasks such as altering the air-conditioning temperature, changing radio stations or navigating a new route. Plus the new MBUX (Mercedes-Benz user experience) that has the ability to learn your lifestyle.

Chief Judge and Driven’s Editor at Large Liz Dobson said the decision to award the Mercedes-Benz A-Class AA Driven New Zealand Car of the Year 2018 was an easy task in the end.

“This is the complete package; a great looking hatchback with not class leading, but class breaking technology plus must-have standard safety features. This hatchback is truly ‘A Class’ ahead of the rest – it has a price tag, sci-fi technology and a fuel-efficient engine that will impress,” Liz said.

For AA Motoring Services General Manager Stella Stocks the Awards mark the culmination of a lengthy and comprehensive voting process.

“Each of the top 10 finalists vying for Car of the Year was put through its paces in a comprehensive trial both on the road and at the Pukekohe Park Raceway with all judges scoring from the driver’s seat. The results speak for themselves giving buyers the definitive answers they’ve come to expect from the AA,” Stella said.

The Hyundai KONA EV took out the Best in Class EV/PHEV honours, with a choice that’s being heralded as the family-friendly electric SUV with real-world battery performance.

“From the start Hyundai realised it was onto something very special when it launched the EV version of the Kona compact SUV, and it is proven right with this win,” Liz said.

New Zealand’s Safest Car is likely to be a popular choice for Kiwi motorists, with the Toyota Corolla taking out top spot.

“It’s not just the car buyers who benefit from the safety elements in a vehicle, all of us have a stake every time a new car starts rolling on the road. The Safest Car Award isn’t judged, it’s calculated with data from the Australasian New Car Assessment Programme (ANCAP), and I’d like to congratulate Toyota for this important recognition,” Stella said.

More than 53,000 Kiwis voted in the People’s Choice Award, making it the biggest public motoring vote to date, with the Suzuki Swift Sport a clear favourite for its cutting edge technology, exhilarating turbo performance and fearless design.

The Suzuki Swift Sport also took out Best in Class for Micro/Light car, while the Mercedes-Benz A-Class was the winner of the Small/Compact Car Class.

The Holden Commodore was the Medium/Large car winner, with the Mazda-MX-5 judged top of the Sports/Coupe and convertible range.

The Luxury Car winner for 2018 was the BMW 5 Series (including M5), while the Volvo XC40 was anointed best Small SUV.

Medium SUV honours were swept by the Subaru Forester, with the Mazda CX-8 taking out the large SUV category.

Luxury SUV winner was the Jaguar F-Pace, while the Utility honours went to Volkswagen Amarok.

A petrol-powered, all-wheel drive, turbocharged pocket-rocket is the 2021 AA DRIVEN New Zealand Car of the...

Despite the Covid-19 restrictions experienced over the past 20 months, more NZ motorists are making the move...

After a year hiatus, the AA DRIVEN New Zealand Car of the Year is returning for...