The 2019 AA Driven New Zealand Car of the Year Awards have tonight bestowed the country’s most prestigious award on the Ford Focus.

The Ford Focus, which is available from $31,990, took out the title of AA Driven New Zealand Car of the Year due to its impressive line-up of technology and dynamic driving, as well as the excellent value for money it provides. 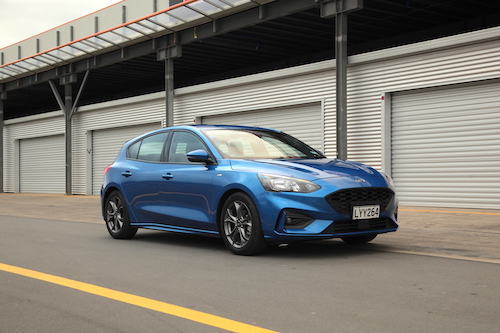 The award was presented at a cocktail event attended by the who’s who of the motoring industry in Auckland tonight, and decided by a panel of judges drawn from the country’s finest motoring journalists and the AA.

Also revealed tonight were Best in Class winners, including EV/PHEV, and the Safest Car, along with the People’s Choice Award powered by Driven.

The Focus has a suite of safety features as standard including Pre-Collision Assist with Pedestrian and Cyclist Detection, Lane Departure Warning and Lane Keep Assist. The ST-Line and Titanium models also have an excellent Adaptive Cruise Control system that can slow the car to a stop and start off automatically when traffic moves.

Chief Judge and Driven’s Editor at Large Liz Dobson said there was stiff competition for the AA Driven New Zealand Car of the Year title, but the Focus ultimately stood above the rest.

“From everyday use family vehicles to luxury, sports performance, hot hatches, and electric and hybrid models for the first time in the award’s history, there was a great mix of vehicles vying for the title this year,” Liz said.

“The Focus has stylish interior and exterior features that sets it apart from other hatchbacks. It won over judges thanks to its standard features, new technology and superb drivability, while providing excellent value for money.”

For AA Motoring Services General Manager Stella Stocks the awards mark the culmination of a lengthy and comprehensive voting process.

“Each of the top 10 finalists vying for Car of the Year was put through its paces in a comprehensive trial both on the road and at the Pukekohe Park Raceway with all judges scoring from the driver’s seat. The results speak for themselves giving buyers the definitive answers they’ve come to expect from the AA,” Stella said.

“It’s no surprise to see a plethora of Model 3 cars on our roads, as it’s an everyday car that packs a punch with an easy-to-use single screen to operate many functions with an impressive entry-level price of $75,900,” Liz said.

New Zealand’s Safest Car for 2019 is the Mercedes-Benz CLA, which achieved full points in a number of tests completed by the Australasian New Car Assessment Programme (ANCAP).

“It’s not just the car buyers who benefit from the safety elements in a vehicle, all of us have a stake every time a new car starts rolling on the road. The Safest Car Award isn’t judged, it’s calculated with data from ANCAP, and I’d like to congratulate Mercedes-Benz for this important recognition,” Stella said.

More than 48,000 Kiwis voted in the People’s Choice Award powered by Driven, with popular family SUV the Toyota RAV4 taking out the title.

The Suzuki Swift Sport was victorious in Best in Class for Micro/Light car, while the Ford Focus was the winner of the Small/Compact Car Class.

The Peugeot 508 GT was the Medium/Large car winner, with the Toyota GT Supra judged top of the Sports/Coupe and convertible range.

The Luxury Car winner for 2019 was the Mercedes-Benz S-Class, while the Volvo XC40 took out best Small SUV.

Medium SUV honours were swept by the Toyota RAV4, with the Mazda CX-8 taking out the large SUV category.

Luxury SUV winner was the Mercedes-Benz GLE, while the Utility honours went to the Ford Ranger.

The benefits of in-car phone connectivity

Being able to connect your phone to your car used to mean just taking calls ‘hands-free’ and...

New vehicles are more sophisticated than ever and often include safety features like Advanced Driver Assist Systems...