BattMan to the rescue! 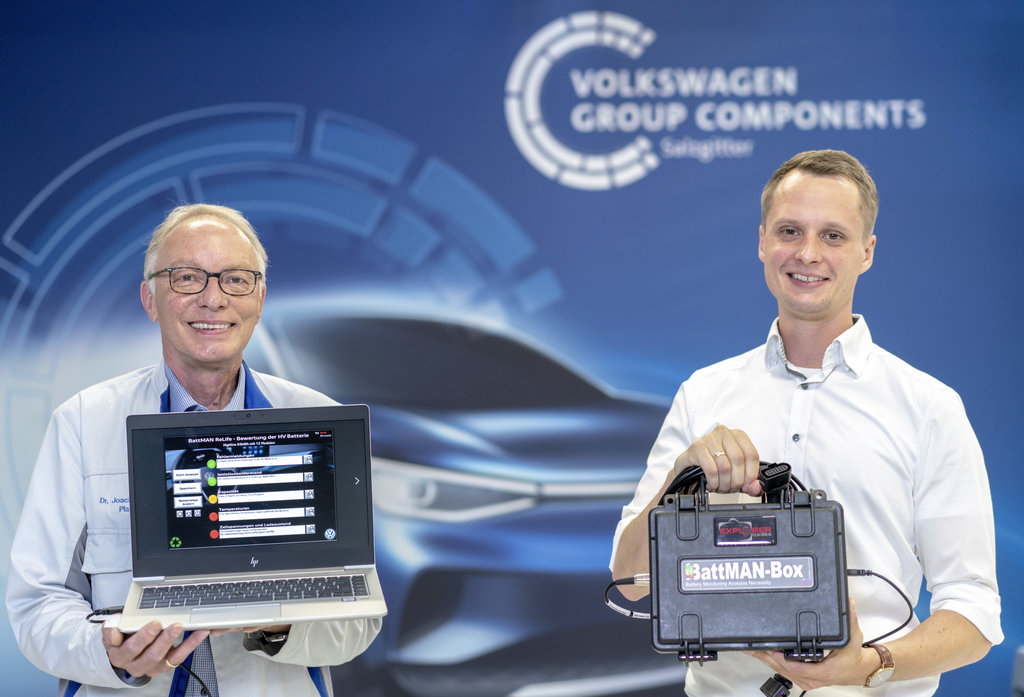 The question is on the minds of everyone who is interested in e-mobility?

What happens to the battery when an e-vehicle has reached the end of its service life?

The answer is simple

The new analysis software BattMan ReLife checks the battery’s state of health in just a few minutes. Starting immediately, the quick check system will be used as a means of initial diagnosis in battery recycling at the pilot plant that Volkswagen Group Components has been operating in Salzgitter Germany since the beginning of the year (2021).

Depending on the capacity that the inspection system detects, a high-voltage battery may be:

The first version of the BattMan (Battery Monitoring Analysis Necessity) software was developed by the Audi Brussels quality management department for the quick and reliable analysis of Audi e-tron’s high-voltage battery. It is already in use as a diagnostics tool for several brands of the Volkswagen Group.

BattMan then underwent further development in cooperation with recycling experts at Volkswagen Group Components prior to the opening of the pilot plant for battery recycling in Salzgitter. After several months of programming and testing, BattMan ReLife emerged as the new analysis solution that provides a reliable first assessment of a battery in just a few minutes to help set its further course. Previously, this process took several hours.

After plugging in the low-voltage connectors, the device first checks whether the battery is even able to communicate and transfer data. The system then detects and displays any error messages as well as insulation resistance, capacity, temperatures, and cell voltages. Axel Vanden Branden, Quality Engineer at Audi Brussels, explains: “We are able to measure all a cell’s most important parameters. Then a traffic light system indicates the status cell by cell – green means a cell is in good order, yellow means it requires closer inspection, and red means the cell is out of order.” 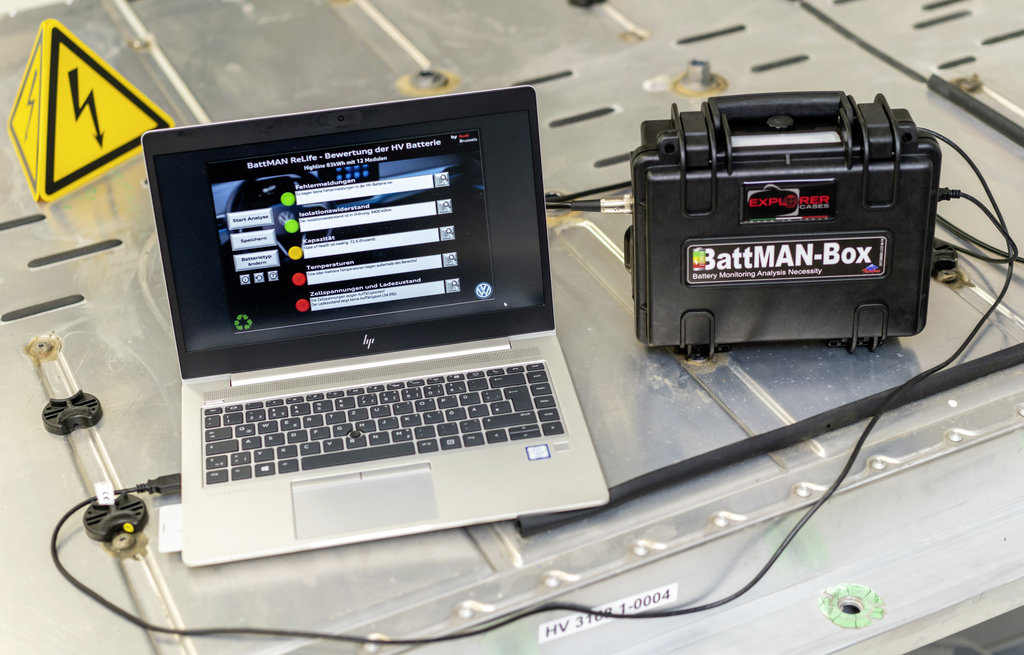 Now three options are on the table:

1. The first is so-called “remanufacturing”, a process by which the battery, due to its good or very good state of health, can be reprocessed for further use as a replacement part for e-vehicles after undergoing repair work reflecting its current market value. A number of related concepts are currently in review and preparation.

2. In the second option, a battery receives its “second life” when it has a medium-good state of health that will permit its continued use outside an e-vehicle for years to come. This might be in a flexible quick charging station, a mobile charging robot, a driverless transportation system, or a forklift as well as in a home storage or emergency standby power system.
The third option entails efficient recycling in the Volkswagen Group

3. Components pilot plant in Salzgitter, where mechanical processes gently dismantle only the most completely exhausted of batteries into their basic materials such as aluminum, copper, plastics and “black powder”. This black powder contains the valuable battery components lithium, nickel, manganese, cobalt and graphite, which are separated by specialized partners using hydrometallurgical means before being processed again into a cathode material.

Frank Blome, Head of Battery Cell and Battery System at Volkswagen Group Components, says: “We know that recycled battery materials are just as effective as new ones. These recycled materials will be used to supply our cell production activities in the future.”

Volker Germann, CEO of Audi Brussels, adds: “The development of BattMan ReLife is a great example of the success that cooperation between the various brands of the Volkswagen Group leads to.”

The AA is a founding member and sits on the Governance Group of The Battery Industry Group - a cross-industry collaboration which has submitted a proposed product stewardship scheme to the Ministry for the Environment, with reuse and recycling solutions for large batteries found in electric vehicles. There are several more steps before the scheme becomes regulated. See big.org.nz for more information.

Part Two: What are vehicle manufacturers doing now to reduce their carbon footprint?

The MINI family of the future

For MINI lovers there are some exciting new models and advancements coming in the near future.