Back in May 2016, the government announced that they wanted to double EV numbers in New Zealand year-on-year, setting a target of 64,000 Electric Vehicles on our roads by the end of 2021.

With just over a year left, it’s safe to say that that target will not be met, however, EV uptake has slowly been increasing year-on-year prior to Covid-19.

As of 1 November 2020, there were a combined total of 23,046 new and used EVs on NZ roads – despite the impact of the global pandemic on new vehicle arrivals, we still saw an increase of 1,187 new EV sales since December 2019. There’s no doubt that the global pandemic has had an effect on vehicle imports but, since May, we’ve still seen roughly 127 EVs join our fleet each month.

But what has helped these numbers? Here are some new EVs you might have seen on our roads. 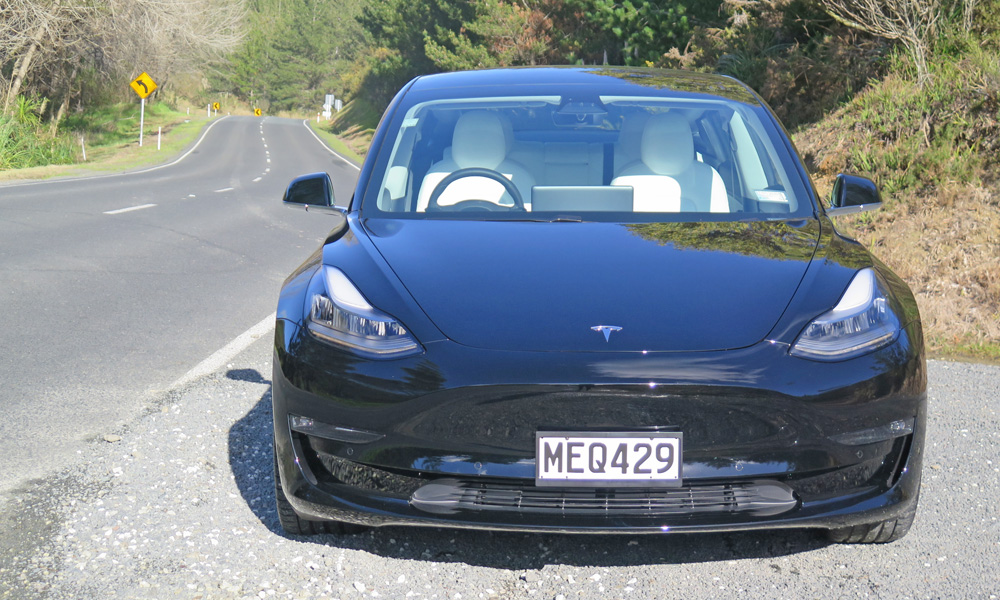 The highly-anticipated Tesla Model 3 landed in New Zealand around a year ago now, and has been adopted by hundreds of Kiwis ever since.

The Model 3 is the least expensive Tesla, and is available new from $76,711, but that comes without Tesla’s famous Autopilot system, which costs an additional $11,400.

Based upon the more premium Tesla Model S, the Model 3 has an incredibly minimalist interior, with the majority of commands and inputs being controlled through its large 15-inch touchscreen which allows for internet access, ‘Caraoke’ and access to a number of fun ‘Easter eggs’ including built-in whoopee cushions.

Tesla will bring another ‘more affordable’ EV – the Model Y – to New Zealand in the future, and three examples were reportedly imported for winter testing on our roads in July this year. A love-it-or-hate-it outlandish ute called the ‘Cybertruck’ is also in the works but, in its current concept design, it’s reportedly not street legal. 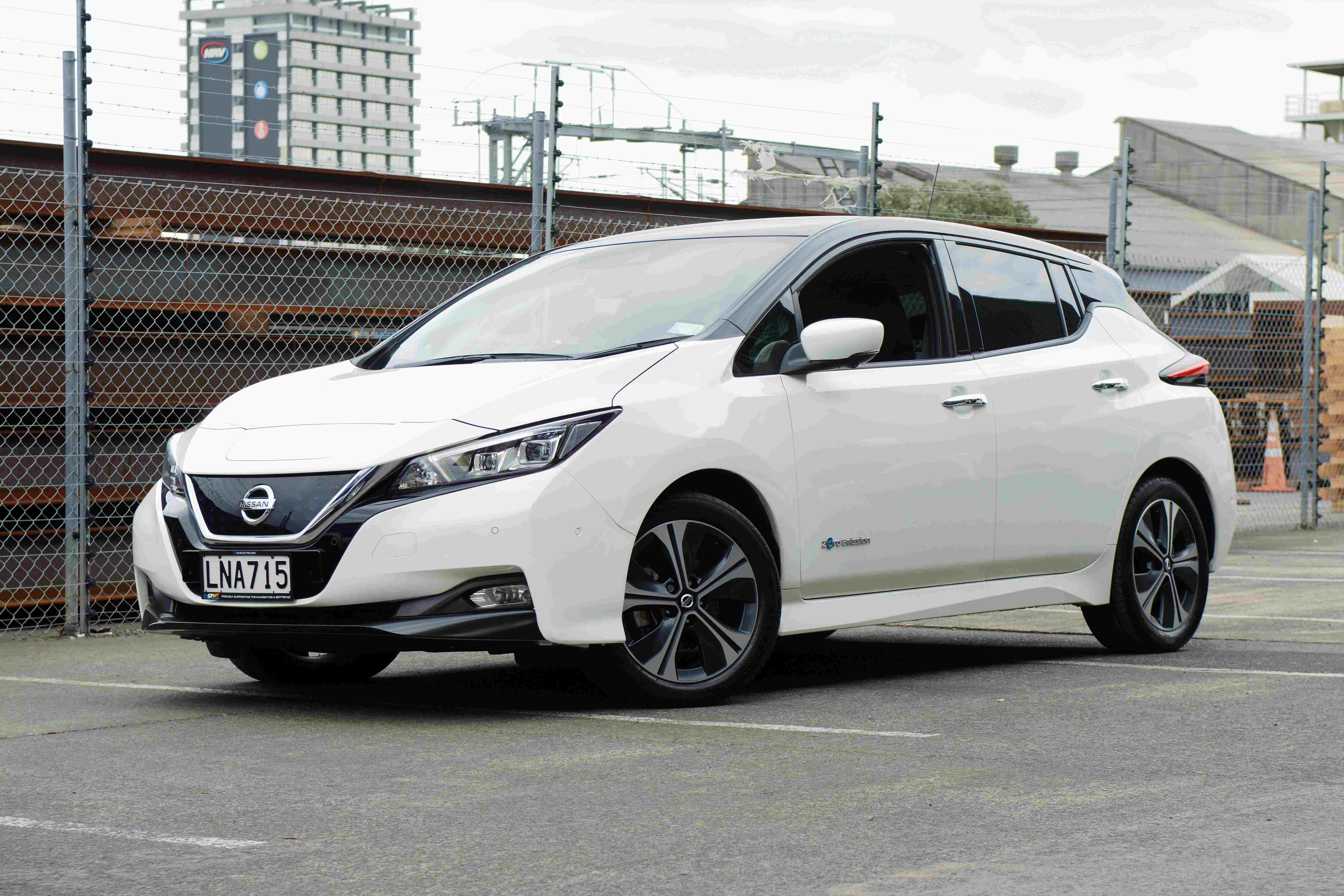 The Nissan Leaf is by far the most popular EV in NZ, making up approximately 50 per cent of the total new and used EV fleet.

Many are imported from Japan, but there are also many NZ-new options. The prices have slowly been reducing and a used Nissan leaf can now be purchased for around the $10,000 mark. The Nissan Leaf is the first experience in EV technology for many Kiwis.

It’s certainly not suitable for all drivers due to a range of just 130km from new, and it’s worth noting that some examples on the market now have a 60% State of Health (SOH) rating on the battery, meaning you’re more likely looking at a range of just 80km on a full charge. This shouldn’t matter if you’re a city dweller and just use your car for short trips.

The new Nissan Leaf, with a range of 270km, is currently available from $61,990 (+ORC). Nissan are launching another EV – a compact SUV called the ‘Ariya’ – in Japan in mid-2021, and it should be available in New Zealand somewhere in the near future. 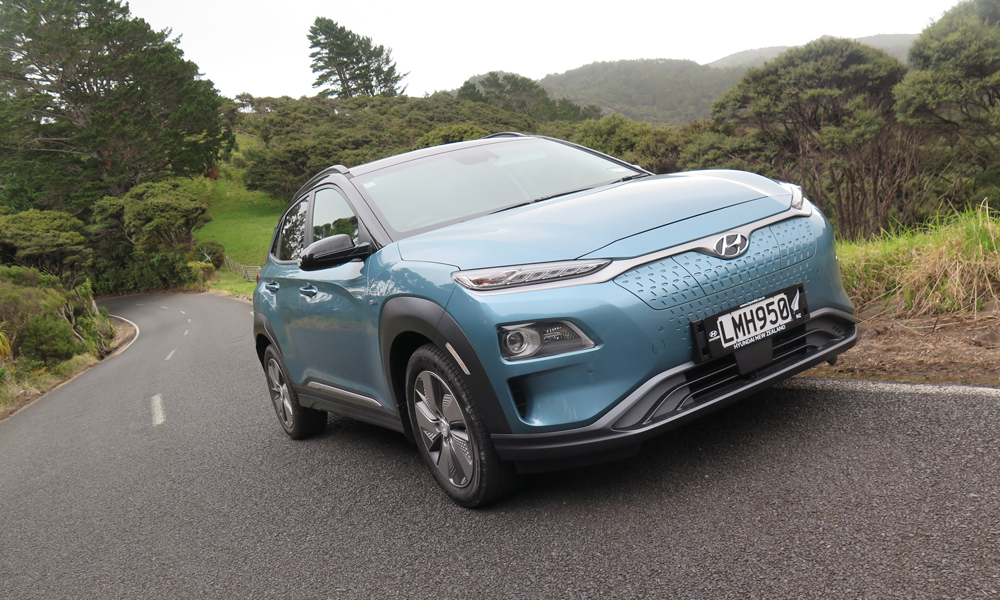 The Hyundai Kona Electric was released back in 2018, and won the Best In Class Award for EV/PHEV at the AA Driven New Zealand Car of the Awards in the same year.

It is a compact SUV, and piqued the interest of many Kiwis when it arrived, mainly due to its practicality and range. Both variants – the Electric and Electric Elite – are capable of 449km on a full charge.

The Kona Electric comes with lots of mod cons like wireless smartphone charging, and heaps of safety features such as Driver Attention Warning (DAW) which helps detect reckless or fatigued driving. 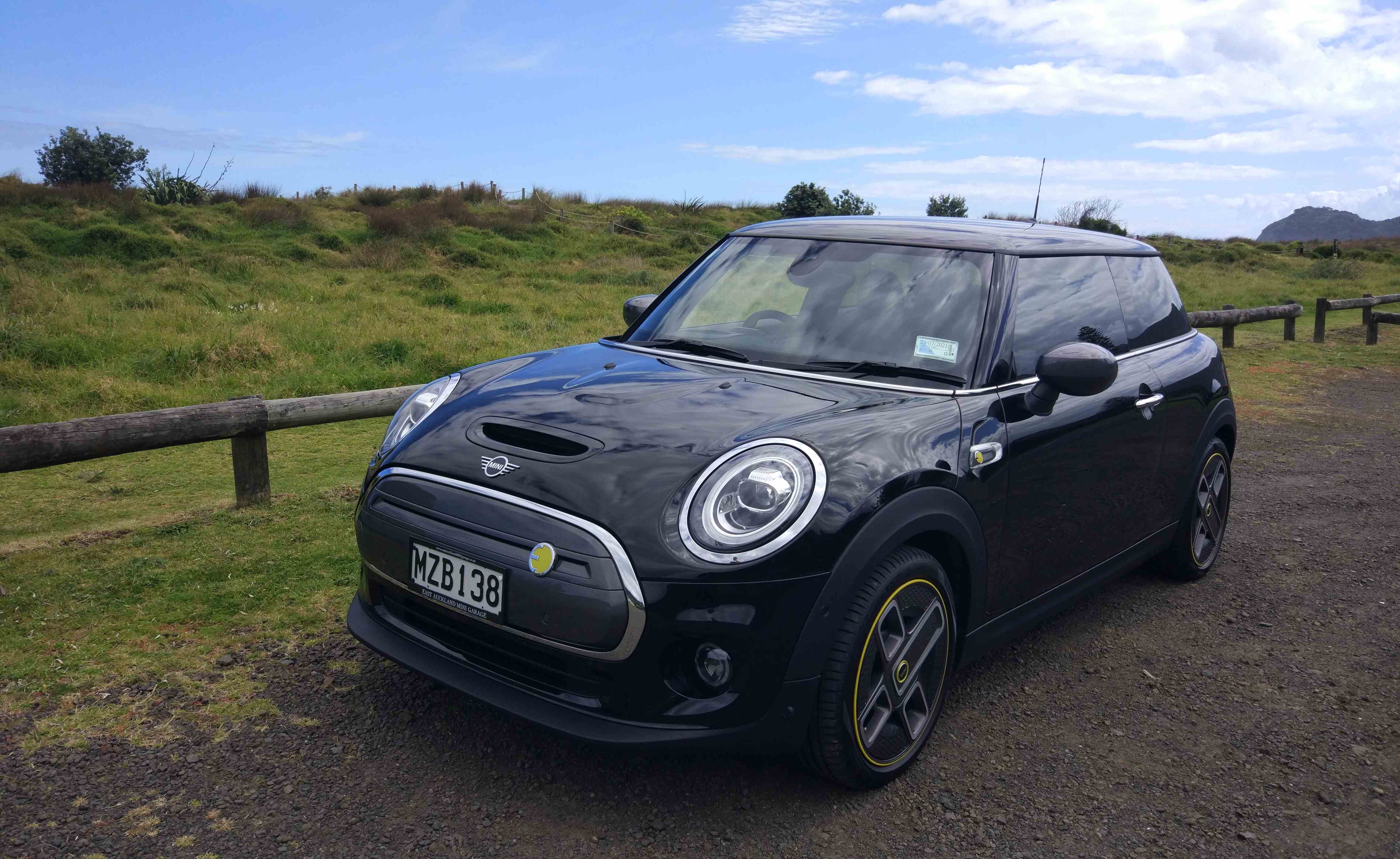 The MINI Electric has only recently arrived in NZ, but it promises to be a popular EV.

Except from some funky wheels and numerous yellow accented dotted around the vehicle, it’s actually very discreet (although unmistakably MINI). We attended the launch of the car last month, and were really impressed by how fun it was to drive.

The small hatch has a range of 233km but, according to a study conducted by MINI themselves, the average MINI owner drives just 37.5km per day.

The MINI Electric pricing starts from $59,990 (+ORC) but the first allocations have sold out. MINI are still accepting orders, with delivery expected mid-2021. 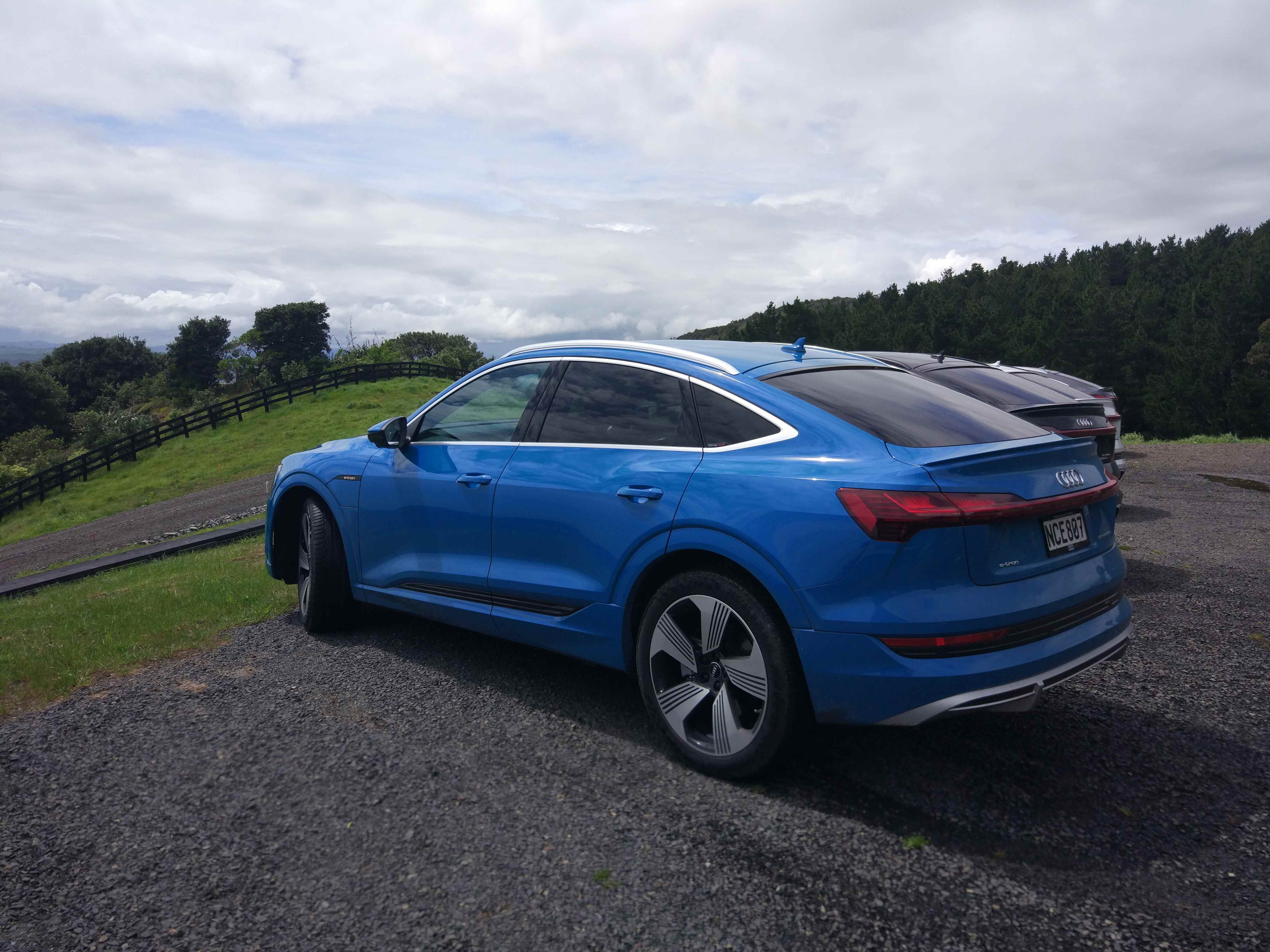 The Audi e-tron Sportback is the newest addition to Audi’s e-tron range, following on from the launch of the standard e-tron SUV in 2019.

The e-tron Sportback doesn’t sacrifice the typical good looks that Audis are renowned for, and is actually quite understated as far as EVs go. It’s pretty much the same car as the Audi e-tron 55, apart from the coupe/SUV look of the body.

What else is coming?

The year 2021 should bring some new EVs onto our roads, although we expect some of these to be delayed due to the ongoing pandemic.

Ssangyong are set to release their first EV – the E100 – sometime in 2021, although details on the project are currently quite scarce. We’d expect the E100 to go head-to-head with the MG ZS EV (which is currently available from $48,990).

European marques Peugeot, Volkswagen and Audi will all bring new EVs to NZ in 2021, and an electric LDV T60 should also be released, making it NZ’s first electric ute.

More recently, BMW has announced that it plans to bring its next EV – the iX – to Australia and New Zealand in the second half of 2021. The SUV will have a maximum output of 370kW, allowing a 0-100km/h time of less than five seconds. Thanks to a ‘latest-generation’ high-voltage battery, it will also boast a range of over 600km.

Battery recycling: It’s all about a circular economy

AA Battery Service is committed to caring for the environment, with an operation dedicated to supporting the...

Part Four: What are vehicle manufacturers doing now to reduce their carbon footprint?

Part Three: What are vehicle manufacturers doing now to reduce their carbon footprint?