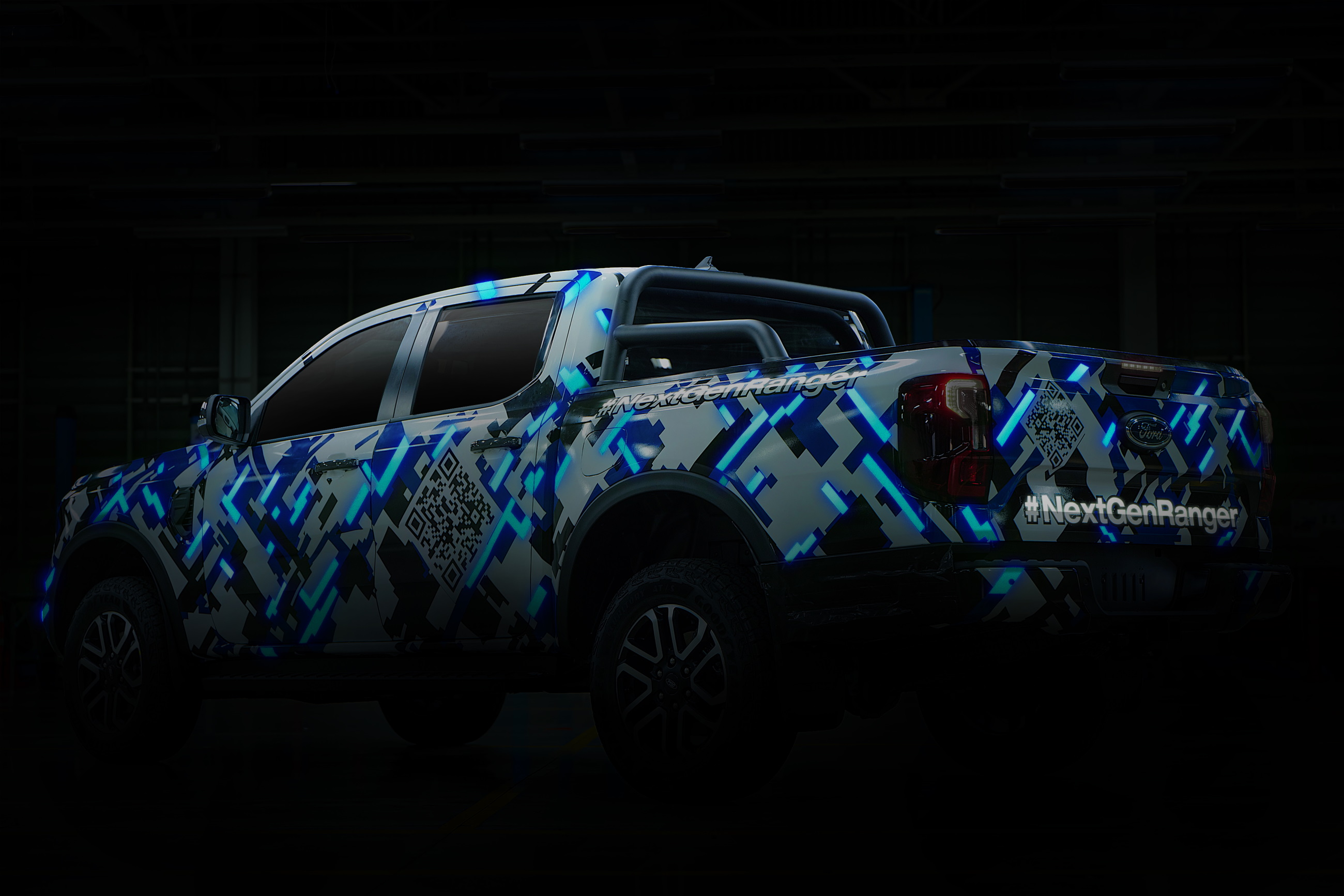 The aim of these patterns is to confuse the eye and prevent industry spies from being able to focus on the vehicle’s features.

The next edition of the popular Ford Ranger heads out on public roads in Australia and Thailand from 8 October 2021 for final testing, dressed in special camo.

Ford’s latest camouflage, inspired by the block pattern on the Bronco R Baja racer as well as mountain ranges, uses hundreds of blue, black, and white blocks in a pixelated pattern to break up the appearance of the underlying shape of the vehicle while it’s still under development. While Ford is not trying to hide the fact that this is the #NextGenRanger thanks to the hashtag and QR code built into the pattern, it doesn’t want to fully reveal the final design just yet.

Designed by a team at Ford’s Design Centre in Melbourne, Australia, this camouflage pattern creates an optical illusion that makes it difficult to pick out exterior features in sunlight, while a reflective element helps hide the vehicle’s shape at night.

“We were asked to develop a camouflage that allowed you to clearly see that this is the new Ranger but not see it at the same time,” said Leigh Cosentino, Design Manager at Ford Australia.

The project was about more than just disguising key features in the sheet metal. “We wanted the design to be dynamic and exciting and build anticipation towards the reveal of #NextGenRanger without looking like a derivative of military camouflage,” he said.

“So, we ended up with this design which is dense at the bottom and then the pattern becomes scattered towards the roof. It ends up being a good camouflage, is visually exciting but also gives the pattern a sense of movement. It’s not the usual static type of camouflage.

Lee Imrie, the Ford Australia designer who developed the successful pattern, added: “The inspiration originally came from the Baja livery Ford has been using, as I’m a huge fan of motorsport it’s hard for me not to be obsessed with machinery like that.

“There’s no line work on this camo that aligns with anything on the exterior and that means you can’t see volume or shape or lines in the vehicle. My intention with this design was to scatter your eye so that you can’t focus on a specific line; and the colour patching adds to that effect.”

But there’s more to the pattern than just scattering your eye. While Imrie said he based the pattern on the Bronco R racer, he also took inspiration from the Next-Generation Ranger itself.

“I started with squares rotated at 45-degrees, and scattered them throughout the page, attempting to make a reoccurring silhouette of a mountain top landscape which echoed the lifestyle orientation of the Next-Generation Ranger. When you stand back, it has a clear connection to a digitised military camouflage but with a connection to nature,” Imrie said.

The digitised pattern took the team two months to develop and test. It’s printed onto vinyl and applied in two stages taking up to two days to apply. The full-vehicle base layer contains the blue, black, and white blocks and is applied in the same way a regular wrap is. The second, reflective ‘layer’ consists of up to one hundred individual reflective elements hand placed on the vehicle.

The wraps will finally come off the next-generation Ranger later this year. Check out what we thought of the Ford Ranger Wildtrak X when we reviewed it back in June this year.

RTR Vehicles is an American automotive company founded in 2009 by Vaughn Gittin Jr. involved in designing,...

Ford NZ charges ahead with seven new electrified vehicles by '24

Ford New Zealand has just released a customer-focused electrification strategy that will give Kiwi customers the choice...