They call it a farm, but the Southern Hemisphere Proving Ground (SHPG) in Central Otago doesn’t grow any of our primary export produce.The SHPG, affectionately known as the Snow Farm, is a favourite destination for the world’s car manufacturers to carry out winter testing for tyres, new systems and prototype vehicle models.

With the rapid progress of technology, and competition between manufacturers to get their products to market first, there’s pressure to shorten the development cycle. The icy conditions of the Snow Farm allow European, American and Asian companies to continue their cold climate test programmes during their home countries’ summer months.

The SHPG is home to 14 test facilities covering 30km of test tracks over 400 snowy hectares. It operates from June to the end of August and provides many combinations of winter surfaces – snow of varying depths and compaction, ice, steep gradients and twisting man-made ice roads.

Split ice and heated asphalt surfaces are designed to test braking, traction, stability and 4WD systems, while ice tunnels and refrigerated containers allow manufacturers to test all types of vehicles and components, including hybrids and electric vehicles, at temperatures to minus 35° Celsius.

For manufacturers such as Audi, the SHPG is the perfect facility for the Audi Ice Experience – a programme designed to showcase their vehicles’ abilities and to allow owners to test their own skills on the slippery stuff. The Audi Ice Experience has been offered to New Zealand clients since 2009 and is conducted by Austrian-based rally and ice-driving expert, Stefan Eichorner.

The day starts in the classroom, where Eichorner outlines the theories about driving in slippery conditions. These are then put into practice, as instructors introduce various driving challenges. Sensibly, the first course is a very wide expanse of frozen surface; it’s amazing how rapidly under-steer turns into over-steer and forward turns into reverse when there’s so little grip. 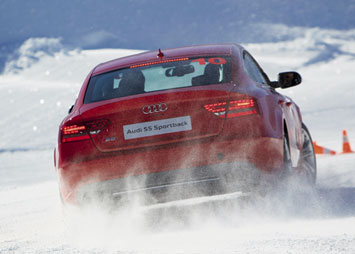 Although it’s easy to laugh at others pirouetting out of control, the seemingly simple task of piloting an expensive (and, under different circumstances, highly controllable) AWD car through a few cones proves astonishingly difficult.

It quickly becomes clear that the classroom tuition was not just theory, but valuable information. The key is less is more: less throttle, less steering input and less heavy braking.

After getting a handle on the basics, we practice steering, counter-steering, braking, accelerating and controlled drifting before testing our newly-acquired skills on a circuit referred to as ‘Little Finland’ – essentially an ice-surfaced track surrounded by deep snow banks.

The team from Audi’s head office seem remarkably relaxed, as our group heads off in a few million dollars worth of shiny new metal to complete lap after slippery lap around Little Finland. Luckily, the soft snow embankments mean that even the clumsiest of us can’t do too much damage.

Before the day is over, we get to test our talents in a timed slalom course. This is when the ‘gently does it’ lessons pay dividends and the aggressive drivers, applying just a smidgen too much throttle, end up in trouble.

And, just to show everyone up, Eichorner takes participants two at a time on a lap in an RS5 Coupe. For those of us who were struggling to weave through the cones at 30km/h, rally driver Eichorner shows us how it’s done, controlling the 331kW, 4.2 litre V8 machine around an extended circuit at speeds of up to 150km/h, with complete confidence.

Reported by Andrew Bayliss for our AA Directions Spring 2020 issue