Check this Aston Martin out

Taking a car this sophisticated, this rapid and, above all, this pricey down a beach track seemed a little mad, but once there I realized the photographer hadn’t just had too much sun, or was a little too much in touch with his Bond fantasies.

For this environment set off the Aston Martin DB11’s elegant lines beautifully, and also demonstrated how surprisingly everyday-useable such a glorious beast
as this can be.

There may be a 48-valve, 5.2-litre bi-turbo V12 engine under the bonnet, it might send an eye-watering 447kW and 700Nm to the 20-inch wheels via an eight-speed transmission and limited-slip diff and reportedly be capable of dispatching the zero to 100km/h sprint in 3.9 busy seconds, topping out at 322km/h...but it’s as capable of trickling along as it is of beating tarmac into submission or zipping across continents. And although sleek performance cars aren’t best known for good all-round vision, the remarkably effective mirrors, combined with the anticipated barrage of reversing cameras, made inching back round the uphill rock-fringed bend something almost approaching a doddle.

But it was the drive back, with sound track reminiscent of jet engines, the rear shimmying round snaking country-road corners, that torque blitzing the few straights, the car’s sheer refinement cossetting us down the final motorway stretch, that revealed all the work that went into the DB11. Plus the fact that no matter how hard you plant the accelerator, it always feels as if there is muscle in reserve. 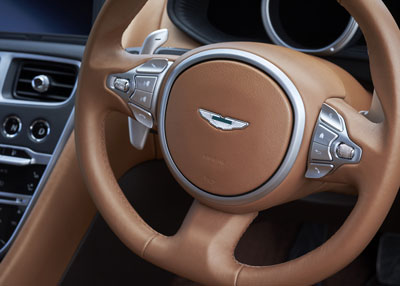 This car has an all-new aluminium platform and benefits from the company’s relationship with Daimler, with stuff like electromechanical power steering, a multi-link rear suspension, and torque vectoring by braking.

The chassis is lighter and stiffer than past models; the body is made mostly of aluminium, with plastic-composite panels for areas like the boot lid, and doors fixed to magnesium frames to cut weight – though this Aston still tips the scales at 1770kg, dry.

Its lines are perhaps a whisker less curvy than some previous Astons, but just as graceful and immediately recogniseable, while those design ‘flourishes’ are functional, with air fed out from the front wheel arches via the wing vents, and inlets in the c-pillars pulling air through the rear wings and out via an aeroblade ‘virtual spoiler’.

Slimmer sills ease entry and egress into the opulent cabin, in which every feature from the shoe-stitched leather to the knurled metal and onwards reminds you that you have entered a stratosphere that, until now, you could only dream of. Everything feels as expensive as it looks, with just enough difference to underline that this is no ordinary car: I bet your Corolla doesn’t use buttons to access park, reverse, neutral and drive.

I’m not huge, but I’d need to do more yoga to get in with anything approaching ease, and sitting back there for long would count as punishment. But the boot is larger, now at 270L, so owners wishing to actually travel the distances a GT is designed to do can at last change their clothes and brush their teeth on arrival.

And when they do arrive, the long blade of a door will open as lightly as you could wish, and hold itself to any angle you choose – an unexpected touch, and appreciated given the photographer’s choices of location.

Specification? There’s not the space here to list it all, especially if one adds the options, like personalized sill plaques, celestial perforation or the 1000W Bang & Olufsen BeoSound system (as standard you get a 400W Aston set-up). Suffice to say, you’d be fussy to complain.

Naturally a car like this isn’t what one might call ‘frugal on fuel’. Our too-brief hours with it revealed an average high of 20L/100km after some brisk country kilometres, dropping to a not-quite-modest 16L/100 after a few highway cruising k's in GT mode, assisted by stop-start cylinder deactivation. But then if you’ve just forked out $365,000 plus on-road costs (and any options) for a car, you’re probably not too bothered about what you’ll spend at the pump.

Reported by Jacqui Madelin for our AA Directions Spring 2020 issue