Jacqui Madelin takes off in an immaculate Impala.

Sitting on the beautifully upholstered front seat and curling my fingers around an almost iridescent-green steering wheel, I gazed down a long, long bonnet and prepared to pull away.

I almost had to pinch myself, for I had always wanted to drive an enormous, 1950s car, with big fins and a boot and bonnet as spacious as your average country rugby field.

And here I was in a 1959 Chevrolet Impala, alongside its very generous owner, about to become only the second person since he acquired it to be allowed to take control.

When the Impala first went on sale in 1958 it was Chevrolet’s most expensive passenger car, retaining the title until the mid-1960s when the Caprice took that mantle.

It certainly looks special, and you can’t help but appreciate its physical presence, most obviously the deeply sculpted horizontal rear wings which look almost like a seagull’s as it poises for flight.

As owner Alex Ross says, you have to admire how complex the process of making those shapes would have been with the relatively limited technology of the time.

It was that tail which led indirectly to Alex acquiring this car. He already owned a 1964 Pontiac Catalina, but the invitations to his 50th birthday party showed the tail of a 1959 Impala, a car his father had owned brand new. So as a surprise, a friend arranged for this Impala to take him to the party.

“It was a seriously ‘TV moment’,  I felt totally overwhelmed by it, but that was the last I thought of it until three months later when the owner got in touch, as he was selling the car. When I drove it away, he was crying…”

That was in 2006, and Alex drove it for just over a year before it sustained some damage. “The insurance was paid, but we decided that was the right time to do a restoration and do it all at once.”

It took 16 months, and included a total engine and gearbox rebuild, performance enhancements to the original 4.6-litre engine, and a number of flourishes: “That car now has paint in places GM didn’t know you could put paint.”

It even has mirrors under the bonnet and boot lids to reflect the contents. It has all the original colours but with a whiff of 21st century; there’s a green pearl in the cream paint. 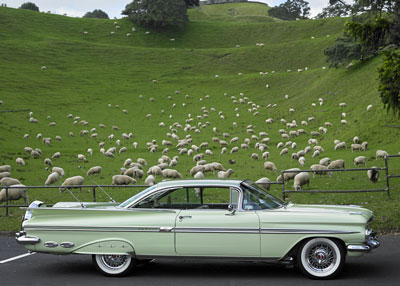 The rear suspension was beefed up, and the front brakes got discs – with drums still slowing the rear. There’s a modern sound system too, with speakers tucked into the boot, which is big enough to double as a spa pool.

The end result not only looks fantastic but performs the part. “It sounds fruitier, goes better, and it effortlessly pulls its matching Lilliput caravan.”

Luckily for me, the Impala was also converted to power steering, as it weighs over 1.5 tons.

Selecting drive for the two-speed Powerglide auto, I somewhat gingerly depressed the throttle and crept away from the kerb, soon finding this Impala easy to drive. It has more than enough power, excellent brakes, a cushiony suspension, despite the promise of a ‘firmer’ rear, and steering that’s light, though a bit lifeless.

In fact, it initially felt quite vague compared to what I’m used to, which given the fact you just about need binoculars to see the corners up front had me a little nervous about my steering accuracy around our chosen start point: a park, with rocky verges and plentiful traffic-calming chicanes.

But once out on city roads, I loved the fact you can just about twirl the beautiful wheel with a finger.

It made steering through the urban glut far easier than expected, and as for pulling away from lights… let’s just say there’s plenty of power on tap, and the car cruises effortlessly, albeit revving a little high at 100km/h in top, or second, gear.

Vision is also good; the cabin is virtually all window and soon I felt comfortable. It seemed I could see every millimetre of the car’s 5.3-metre length and almost two-metre width.

The Chevy has limitations on its original suspension – if I braked hard it might have nose-dived or pulled – and the vague steering wheel could make any sudden corrections rather less predictable than I’d like, but then that’s all part of driving a 60-year-old car.

Alex has taken it as far afield as New Plymouth and Whangamata from his Auckland base, despite its 20L/100km thirst, and no doubt it turned heads the whole way.

I’m just glad I dressed the part, for driving this Impala felt every bit the special occasion I’d anticipated, if a whisker less intimidating than I’d feared.

Reported by Jacqui Madelin for our AA Directions winter 2017 issue

We investigated how a 2012 Toyota RAV4 Limited stacks up against the latest model.

Behind the garage door: crafted coffins