Dylan Thomsen looks at TEN ways our next government can make transport better and safer.

New Zealanders will go to the polls to elect our next government this September. As another election campaign hits top gear, the AA is going to all the major political parties with our AA Election Calls. These are ten actions we want the next government to take to make transport safer and better. Of those ten, we are making three in particular our highest priorities.

As you read this right now there are probably thousands of people out on the roads not wearing a seatbelt. The good news is that they are a very small proportion of the population – the most recent nationwide surveys found 96.5% of people in front seats and 92% in back seats were wearing their seatbelts.

Unfortunately, those small percentages still equate to tens of thousands of people not being buckled up when they are in a vehicle and hundreds of deaths that a single click could have saved. Last year alone, 100 of the drivers and passengers who died in a crash were not wearing a seatbelt. That is 100 out of the 242 vehicle occupants who lost their lives overall in 2016. 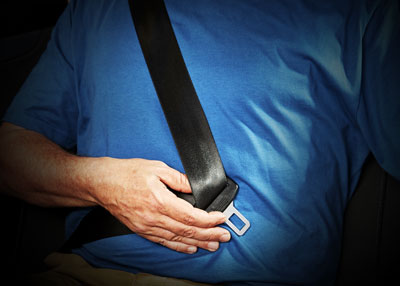 To put it another way, a staggering 42% of the vehicle occupants who died were not buckled up. Not all of them would have survived if they had been wearing a seatbelt, but a large number of them would have. Perhaps as many as 50 people would still be alive today.

It is not uncommon to have crashes where those who are buckled up walk away with minor injuries while those who are not lose their lives.  If we could get every single driver and passenger to make it click every single time they drove our road toll would drop overnight.

This is why the AA is calling for the next government to make seatbelts an urgent road safety priority and focus on what can be done to stop these unnecessary deaths.

One of the most disturbing and mystifying aspects of the issue is that the number of people dying when not wearing a seatbelt has skyrocketed in the last three years.

From less than 60 deaths a year earlier this decade the numbers jumped to 92 deaths in 2015, then 100 in 2016. There have been 36 deaths in the first five months of this year and the problem is much worse here than in Australia.The three Australian states with bigger populations than New Zealand all have less than half the unrestrained deaths that we did. Queensland had just 18 unrestrained road deaths for the whole of 2016. We had 16 in the month of December alone.

This is not an easy issue, and tackling it will involve answering difficult questions about who those people not wearing seatbelts are. Why aren’t they buckling up, and what would be the most effective way to get them to change their behaviour? But when nearly one in three of the people dying in crashes is not wearing a seatbelt, we have to do much more than we have been.

More people died not wearing a seatbelt in 2015 than from crashes involving a drunk-driver (although some deaths will have involved both). As mentioned in Chief Executive Brian Gibbons’ editorial, the AA and several government agencies have already begun a joint research project to look in detail at fatal crashes where someone was not wearing a seatbelt, but we need the next government to make tackling this issue a core part of its road safety policy.

Preventing drink-driving attempts The AA’s second key Election Call is for the next government to ensure at least 5,000 of the highest risk drink-drivers have an alcohol interlock installed in their car. The AA has been pushing for years for interlocks to be made a mandatory sentence for repeat offenders or those caught at extremely high levels of alcohol, and the current government has recently been moving to make this the case. We have to make sure the intention becomes reality though.

In 2012 when interlocks were introduced, it was expected that thousands of drink drivers would be sentenced to them but it didn’t happen. Only two per cent of the eligible offenders appearing in court ended up having one of the devices put in their vehicle. The AA calls interlocks the best weapon we have in the fight against drink-driving; they effectively mean a driver must pass a breath test and have no alcohol in their system before they can use their car.

Each time an interlock won’t let a drunk driver start their car, could be the time that prevents an innocent person losing their life. As an added bonus, it prevents drink-driving without using up more police and court resources.

The hidden killer on our roads

Our other priority Election Call is for the government to give the police the power to catch drugged drivers.

Australia has been using roadside drug testing devices for more than a decade in some states and the UK introduced them in 2015. It is past time that New Zealand followed suit and started using technology to fight what the AA sees as a ‘hidden killer’ on our roads.

When blood analysis was done on 1,046 drivers who had died in crashes from 2004-2009, it found that one in three had some form of impairing drug in their system – mostly cannabis.

Another study of 453 drivers that crashed in 2010 found 29% of the sober drivers hospitalised as a result of those crashes had potentially impairing drugs in their system.

Introducing testing devices that can use a driver’s saliva to test for some types of drugs will require some big changes to our laws, and they would need to be used in a much more targeted fashion than the mass alcohol testing that is currently done. But other countries have shown it can be done, and some roadside checkpoints in Australia are now catching more drugged-drivers than drunk ones.

The present system is simply not doing enough to send a message and stop someone getting stoned and then getting behind the wheel. If a police officer suspects a driver is affected by drugs, they can make them do an impairment test involving getting them to count, balance and have their pupils examined, but it is old-fashioned, slow and seldom used.

Only a few hundred impairment tests for drugs are normally done a year, while Ministry of Health surveys estimate 130,000 New Zealanders are regular users of cannabis, and a substantial number of those admit to driving stoned.

The unacceptable truth at the moment is that a driver who had smoked a joint just a few minutes earlier would have a good chance of passing through a police checkpoint as long as they are under the alcohol limit and can avoid looking obviously stoned for a few moments. Not only does this make our roads riskier, but every time someone drives drugged and gets away with it, it strengthens the idea that it is OK to do so.

The AA has made these three issues our ‘hero’ Election Calls, but there are seven others that we will also be asking the incoming government to deliver on. These are:

Providing more safe passing opportunities for people when they are driving.

Extending the visiting drivers safety programme nationwide from the South Island regions it has initially targeted.

Installing a network of red-light cameras at high-risk intersections in our major cities.

Creating a congestion-busting taskforce to identify projects that will deliver the best congestion benefits to the public.

Requiring service stations to display the price for all fuel types they sell on their price boards.

These Election Calls have been developed through surveys of AA Members to identify the transport issues they care most about as well the AA’s own research and analysis of what positive changes the next government can make.

If these ten Election Calls are implemented by whichever parties are elected into power, they will deliver real and long-lasting improvements for safer and better travel for all New Zealanders.

Reported by Dylan Thomsen for our AA Directions winter 2017 issue