How to get new drivers ready for the road, by Katheryn Webster

“Anything you can do to give your teen a safer time has to be a good idea,” says Ali Mau. Her 16-year old daughter Paris is learning to drive. Ali’s determination to prepare her as well as she possibly can before handing over the car keys is a sentiment all parents can relate to.

“I can afford to pay for lessons for her,” says Ali. “For some people it will be too expensive but I plan for Paris to have at least half a dozen lessons from a professional.”

Ali grew up in Australia, where the trend was to have professionals teach you to drive. When she came to New Zealand 20 years ago, one of the things that surprised her was the Kiwi tradition of having parents or siblings do the honours. She understands the tests involved in getting a driver licence have been more rigorous in Australia than here, too.

“Although with the changes to New Zealand rules, it might be the same now – and I hope that’s the case. I would rather it was hard.”

She’s right; it has become harder to pass your restricted licence. And they’re on the right track as a family confronted with the business of learning to drive. They’re taking it seriously and slowly. Before the changes to the driver licensing system in 2011, someone with their learner licence was expected to get around 30 to 40 hours’ supervised practice in order to gain the skills necessary to pass the restricted licence test.

Now, it’s a lot more. The AA recommends a learner driver has five professional lessons, at least, and between 10 and 20 hours’ supervised practice between each lesson.

Those first few months, when they are no longer being supervised by someone beside them in the car is a particularly dangerous time for new drivers.

“Crash statistics all over the world show that the first six months of driving solo is where the spike is. So we are trying to make sure that people are at the highest driving level possible, to minimize that spike.”

And New Zealand has one of the highest rates of road deaths among young people in the developed world. Demanding more supervised practice, increasing the difficulty of the tests, and raising the minimum driving age to 16 addresses this issue head on. Everyone concedes it’s early days.

“This new system has only been in place for two and a half years so it’s too early to tell how effective these new measure are, but it’s trending in the right direction,” says Jim. 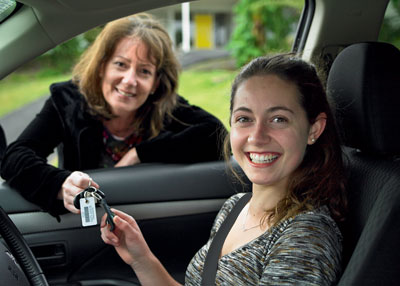 Another contributing factor to the cultural shift in how New Zealanders approach driver training is the accessibility of information, giving learning drivers what they need to know, what the tests will focus on, what practice is appropriate.

Auckland teenager Sophie O’Connell passed her learner’s test first time around, soon after turning 16. “I was confident about it,” she says. “I had done lots of preparing and lots of online practice.”

Although Sophie’s mother Bernadette gave her the first lessons in the family car and continues to supervise practice as she prepares for her restricted licence test,  they always intended including professional lessons in the mix.

“Mum thought it best to go to the professionals before I picked up bad habits,” Sophie says. Their method of Sophie attending a lesson and then practising what the instructor focused on is exactly what AA Driving School recommends.

“Ideally, when someone’s learning to drive, they’ll have professional lessons and lots of supervised practice between those lessons,” says Karen Dickson, National Manager of AA Driving School. “Those practice sessions should provide lots of variety of experiences and environments, so they’ll be driving in rain one day, at night sometimes, on a motorway, on city streets.

Providing all those different experiences is crucial. “Another really good idea is for the parent, or whoever is taking on the role of teaching to drive, to sit in on the professional lessons. They can sit in the back seat and absorb what is going on without intervening, of course – but picking up on things that will help with the follow-up practice sessions.

“Getting that insight into the professional approach is really valuable,” she says. “That’s why we’ve developed a programme of free lessons: to encourage people to learn up-front and then practise the right stuff.  The professional element takes a learner to the next level of competency.”

The recently launched AA Ignition programme provides three professional driving lessons free to AA Members*. That initiative sits alongside a resource-rich, interactive website, designed to assist learning drivers at each step of the way toward getting licenced.

“We want to be as supportive as we can,” says Karen. “We refer to it as ‘learning to drive the AA way’.” Helping hands In the interests of supporting her daughter Sophie learning to drive, Bernadette O’Connell had her driving assessed by AA Driving School Instructor, Tom Williams.

Ideally, when someone’s learning to drive, they’ll have professional lessons and lots of supervised practice between those lessons

Tom gave her a few pointers, encouraging her to be more aware of what was going on around her, and suggesting she indicate a fraction earlier than she tended to. But overall, Tom found her driving skills good.

“There was a little bit of clarification needed in some areas,” he says, “but nothing major. The sorts of things that can be easily fixed once they’ve been brought to someone’s attention.”

Bernadette found the experience encouraging. “Sophie will still get the teaching from the professionals but I’m able to supervise in between lessons knowing that my driving is pretty much OK. Overall it was good, and that was good to know.”

Apart from having their own driving checked, what else can parents do to support the learning process? Tom suggests re-reading the road code to refresh and update their understanding of the road rules. Also, if possible, they should sit in on some of the professional lessons or, if they’re not able to do that, they could check in with the instructor after a lesson so that everyone knows where the student is up to and what should be practised. What went wrong?

Around half of applicants sitting their restricted licence and around 65% of those going for their full licences, pass their tests the first time. Some have to sit their tests several times before passing. Failure can be due to vehicles not being up to standard (including defective lights, worn tyres or insufficient petrol in the tank), making more than one ‘critical error’ or making an ‘immediate failure’ error.

A critical error – accounting for around 58% failures on the restricted test – includes driving too fast or too slow, failing to look, failing to signal, blocking a pedestrian crossing, mounting a kerb, stalling and not stopping fully at a stop sign.

The most common fault is not signalling. Driving dangerously on a test will lead to immediate failure – most commonly speeding excessively or failing to give way.  People going for their full licences most often fail due to not signalling or driving at excessive speed.

Applicants unhappy with the outcome of driving tests can contact the NZTA (nzta.govt.nz/about/contact) to make a complaint. The AA takes bookings for driving tests and provides venues for the tests to be run from, but the testing is not done by AA staff or contractors.

* To be eligable for AA Ignition, participants need to have held their learner license for two months or less.