It has to involve a great story, be educational and be inspirational. The day Sergeant Dean Hart, an airforce technician, introduced himself with the words: “I’m building a jet car by putting a jet engine in an old top-fuelled drag car. I want to crack the New Zealand land speed record” – he knew he had found one.

He picked up his camera and, six years later, Trash 2 Dash was in the can. The film picks up the project a few years in, in 2014, when Dean is part way through the build – a mission accomplished on a tight budget. Most of the componentry was recycled: the engine was from an old RNZAF Strikemaster aircraft and it was attached to a secondhand race car. Not even Dean’s fireproof jumpsuit and underwear were new. 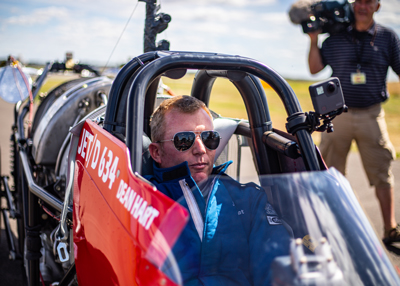 Wayne documents the end of the build, the car being fired up for the first time; being test driven and then put through its paces at record-breaking speeds at Ohakēā airforce base.

“I knew it was a great story but I didn’t know the outcome. That’s the nature of documentary making,” says Wayne, who made it the ‘old-school way,’ with one camera and ‘zero budget.’

The documentary was released in selected cinemas nationwide in early March. For details, see the Trash2Dash Facebook page.