Every year, around 100 New Zealanders take their vehicles on holiday overseas.  Usually, they have arranged a Carnet de Passage en Douane, an international customs document issued by the NZAA. The document is like a passport or a visa for a car, motorbike, campervan or trailer. It proves to customs officials that a bond has been left in the country of origin and guarantees payment of duties, if the vehicle isn’t exported within the stipulated time frame.

Without the document, touring motorists have to place a customs bond at each border they cross. The bond is refundable on departure but, in most cases, that doesn’t happen immediately and, if they are crossing several borders, those costs quickly add up.  Plus, it can be tiresome trying to reclaim money from foreign officials. Sorting out the paperwork before leaving New Zealand avoids a lot of this hassle.

The carnet is accepted by many countries around the world, including parts of South America, Africa, Asia, the Middle East and Australia, with Australia the most popular destination for Kiwi carnet applications. The AA hears fascinating road trip stories when carnet holders return.

One account reveals how Ken Wilson, an adventurous weekend motorbike enthusiast, became an addict of long- distance riding. Wellington-based Ken shipped his motorbike to Australia and, with a carnet, he was able to use his New Zealand-registered bike to circumnavigate the country. A friend accompanied him and they rode more than 23,000km in a couple of months. It wasn’t long before the two friends decided on another challenge.

The next journey was from Alaska down to Argentina and this time Ken’s wife Shirley accompanied them, as pillion on Ken’s motorbike. One of the advantages of taking your own transport is being able to customize it for the trip, as Ken did.  Additional safety features, such as extra lights and crash bars, protective guards, more storage and comfortable sheepskin seat covers, ensured the ride was as smooth as possible. The carnets were sorted and Ebony, Ken’s BMW motorbike, was crated and shipped to Canada. 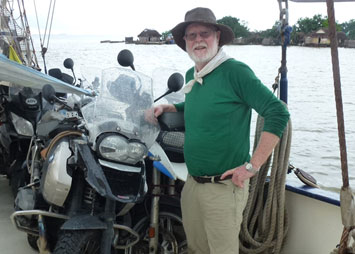 A few weeks later, he and his companions had collected their bikes and started the journey. The route to Alaska consisted of roads alongside snow-capped mountains and a glacier-fed alpine lake. Once Prudhoe Bay was reached, the bikes were pointed south.  They crossed back into Canada, then into the United States of America, with a plan to visit as many national parks as possible. On the route they stopped at the remote Four Corners monument, located in Navajo country.

This is the only place in the USA where four States meet at one point and, if you are a bit flexible, you can literally be in Arizona, Utah, New Mexico and Colorado at the same time. They rode further south down the iconic coastal route through Big Sur, past the Hearst Castle museum where the late publishing tycoon William Randolph Hearst’s art collection can be viewed, then crossed over the Bixby Creek Bridge en route to Hollywood’s Santa Monica Boulevard for a night out on the town.

The border crossing into Mexico was more like a moderately busy intersection and the customs officials waved the bikes through.When they arrived in La Paz, Independence Day celebrations were underway, with Police and soldiers in camouflage gear carrying large rifles marching through the streets. Then, after sunset, fireworks lit the skies. Heading out of La Paz through cobble streets, they went to Guatemala for a stopover. Then, crossing six borders from Mexico to Panama in six days, they arrived at the ferry terminal in time for the monthly crossing to Cartegena, Colombia in a 105-year-old boat.

They found the roads in Colombia dominated by fully-laden trucks transporting sugar cane, which made passing on motorbikes tricky, but the superb drive through rainforest and up steep mountain ranges made it worthwhile. The equator crossing into Peru revealed a desert terrain, with high daytime temperatures and cold nights. A 600km circuitous route up to 15,000ft above sea level Ken described as “awesome” and, at the top, the ancient Nazca Lines were visible. After riding the many dirt roads in Argentina and crossing 19 borders, they made it to Ushuaia at the bottom of the country.

It’s not only bikers that have all the fun. Classic vehicles are often shipped over the ditch, and further afield, for car shows and rallies. Adventure seekers take their 4X4 vehicles on African safaris and to the Australian Outback, and some Kiwis like to tour abroad with their own caravan or motorhome.  Armed with a carnet, the business of getting their wheels into foreign countries is relatively easy.

Reported by Donavan Edwards for our AA Directions Spring 2020 issue