The Gordon family name is synonymous with farming on the Hawke’s Bay headland of Cape Kidnappers.

Their beginnings in the area stem from James Gillespie Gordon, a merchant trader in India who suffered heavy financial losses following the Indian Mutiny of 1857. Forced to rethink his family’s future, the 66-year-old Scotsman set sail aboard his trading schooner for New Zealand in 1861. He brought a prefabricated house of teak timber, some handcrafted furniture and a team of mules with him. James had already visited the country in 1859 and purchased a 5465ha parcel of land from the Crown, known as the Kidnappers Block, for £3375.

With his sons, William and Thomas, he set about establishing a farm, despite none of them having experience as farmers; all they knew was gleaned from a few books they purchased.

The first order of business was a name change for the place and James settled upon Clifton, after his old school in England. The next thing to do after landing their household cargo, hauled ashore by the mules while James stood waist-deep in water with a pitchfork ready to ward off potential shark attacks, was to find a supply of drinkable water.

As it turned out, this farming venture would end up a Herculean task for the Gordons, filled with many difficulties over the years. The parched hillside country with its steep, erosion-prone cliffs and ravines sorely tested everyone who took up the challenge.

William, the elder son, never reconciled himself to life as a provincial farmer. Depressed, he developed a drinking problem which precipitated his early death when he fell from his horse and drowned in a stream, on his way home from a night out in Napier. 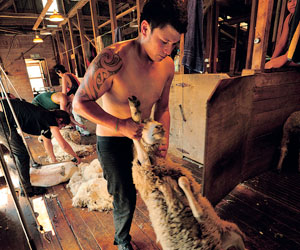 Thomas arrived a year after the others with his new wife Janet, who had something of a fragile temperament. By then a homestead with out buildings was standing, shelter trees planted and a two-storey woolshed with shearers quarters built. The land itself was cleared of bracken and sowed with grass, and Merino ewes and rams had been purchased to stock the farm.

These were turbulent times in the young colony and there was growing discord among Maori towards the European settlers.

On Thomas’s arrival in Wellington he received a Captain’s commission from the Governor, George Grey, and was asked to raise a troop of cavalry volunteers when he reached Napier, which did nothing to alleviate his wife’s nervous disposition.

Things came to a head for the family, and the province, in October 1866 when a contingent of adherents to the rebellious Hau Hau faith arrived in the district. A group of 20 or so warriors presented at the Clifton homestead, threatening the family, before galloping off. Thomas was called upon to aid the colonial forces in expelling them and several skirmishes occurred before the Hau Hau surrendered.

This was all too much for Janet Gordon who demanded that the family, which by now included six children, return to Scotland. James stayed, assisted by a manager, for another 10 years. He eventually retired, leaving New Zealand for good in 1873 to settle in North Devon. One of his grandchildren, Frank Gordon, returned to New Zealand in 1884 to take up the mantle – at just 18 years of age.

Seven generations of Gordons have faced the challenge since James’s pioneering efforts at Cape Kidnappers. The current owner of Clifton, Angus Gordon, wrote a family history in 2003 titled In the Shadow of the Cape. In it, he states that the Gordons have “clung tenaciously to this little corner of what, to them, will always be paradise”.

Today’s Clifton is vastly different to the one James Gillespie Gordon departed from over 140 years ago. For a start, cattle now graze much of the hillsides. Portions of the original estate had to be sold off as wool prices fluctuated over the intervening decades. During the 1980s Labour Government reforms, farming subsidies and tariffs were removed, forcing Angus to diversify into crops like strawberries, legumes, peas and beans. In each case the returns were marginal until he hit upon early season butternut squash for the Japanese market. A few hundred acres of this proved to be the salvation for the farm.

As with any large family dynasty, the descendants multiply exponentially; land has been divided down family lines. After buying out her brothers’ interests in Haupouri Station, bordering on Clifton’s south-eastern boundary, Angus’s cousin Juliet and her family continue the farming tradition, augmented by a performance horse stud.

Boxed between those two blocks is another, larger station sold out of the Gordon family in 1924. In 2002, the Cape block was sold to Wall Street billionaire hedge-fund manager, Julian Robertson, who has incorporated an internationally renowned golf course and luxury lodge into a working sheep and cattle station.

Running across 2500ha of three collective blocks is a 10.6km vermin-proof fence, stretching from Clifton across to Ocean Beach, known as the ‘Cape Sanctuary’. Inside, introduced predators are eradicated and protected native species released despite traditional farming operations continuing within the sanctuary boundary. James Gillespie Gordon would be amazed at the transformation of the promontory of land he first spied from his schooner off the East Coast of Hawke’s Bay, once known to ancient Maori as Matau-a-Maui, the fishhook of Maui.