Rotorua Trails Trust is a not-for-profit organisation that builds and maintains the mountain biking, equestrian and walking trails in Rotorua's Whakarewarewa Forest.

One hundred and eighty kilometres of mountain bike trails combine with roads and walking tracks to make up the 300km-network winding through the forest. “It’s a fair chunk of land to get around!” laughs Kris O’Driscoll, the Trust’s Operations Manager. 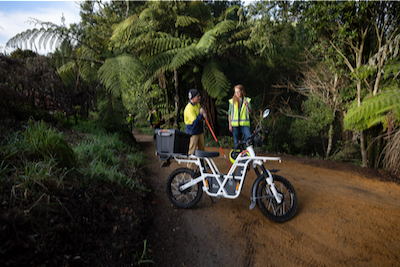 However, there are limits to the type of vehicles that are  permitted in the Whakarewarewa Forest. “We can’t use motorbikes; they’re not allowed,” Kris explains. “We do have utes, but that’s not the easiest way to get into the trails. And once you’ve pushed open a few forestry gates you get a bit over that; they’re not light!”

“We also don’t want to destroy the tracks. Motorbikes and other heavy vehicles can damage the trails.”

Until recently, the maintenance team would use ebikes to make their way into the forest, but trying to transport tools like chainsaws, rakes and spades on an ebike proved challenging.

The solution came in the form of a 2x2 electric off-road bike, provided by innovative Kiwi company, UBCO. UBCO – the Utility Bike Co – was founded in Mount Maunganui by entrepreneurs Anthony Clyde and Darryl Neal who came up with a prototype originally known as ‘Steed: the two-wheel drive electric workhorse.’ The bike caught the eye of Tim Allen at Field Days Innovations in 2014, and he came on board as CEO of the newly formed company the next year.

Today the UBCO bike is in its fifth generation.

Lightweight, emission-free and almost silent to run, UBCO bikes are designed as a practical and environmentally-friendly alternative to combustion engine farm bikes.

“We’ve really marketed the bikes on their own merit, rather than them being electric vehicles,” Tim says. “At the end of the day they have to work. Being based in New Zealand is a both a blessing and a curse. It’s probably the toughest off-roading environment in the world and the sector that we chose to go into is the hardest on any vehicle. It’s wetter, tougher and harder than most places.”

But UBCO has been successful in building hardworking off-road bikes that are up to the challenge. 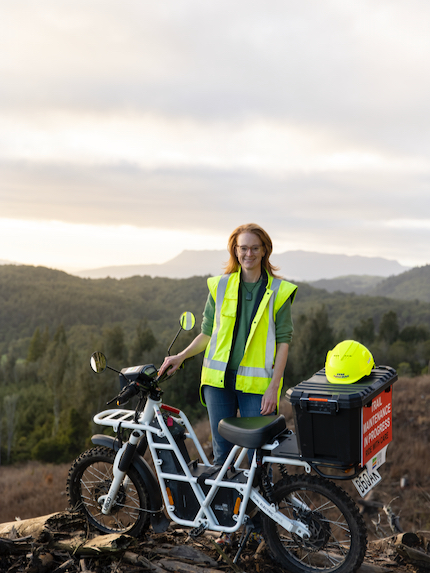 For Kris and the team at Rotorua Trails Trust, the UBCO bike has made their jobs much easier. “The UBCO has been amazing because we can strap the tools to it,” Kris says. “They’ve also got accessory kits that are really useful; we’ve got a box on the back to transport all the gear that we need.”

“The UBCO is light enough that it doesn’t damage the trails and it’s fun to ride. It’s zippy and doesn’t feel like some massive motorbike,” Kris continues. “I’ve ridden farm bikes before which always felt like they were a bit much for me. I’ve also come off and thought ‘that wasn’t much fun.’ I’ve been worried that I might kill myself rather than actually enjoying the ride.”

Being battery-powered, with no chain, exhaust or engine, the UBCO bike is also a very quiet ride.

“People are in the Whakarewarewa Forest to enjoy quiet reflection and time outdoors, so having a motorbike zooming around would not really add to that ambience,” Kris says. “Having an UBCO that is silent is a lot more beneficial for what we do.”

“For people who haven’t been on an electric vehicle before, or need convincing, most concerns are about the battery,” Tim adds. “They want to know how long it will last. But interestingly, range hasn’t really been an issue so far. On a farm, people are travelling about 10-20km per day, so it’s not massive. Our batteries are is well and truly capable of doing that.”

Kris agrees. “We’ve actually got a lot of land that we have to cover, but the UBCO battery seems to last for ages. It’s great knowing that our team can get all around the forest without us having to go and pick them up on the other side because they’ve run out of juice.”