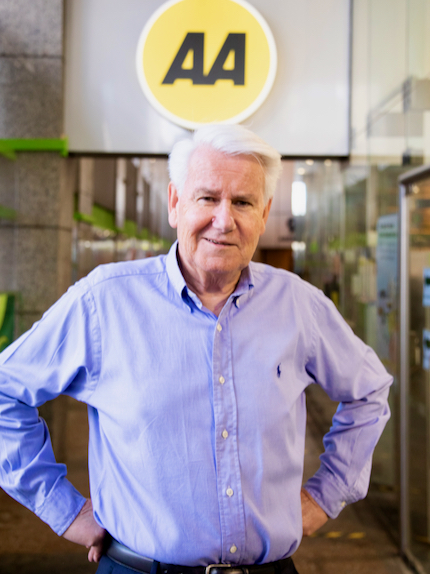 After 40 years at the Automobile Association, Brian Gibbons is retiring. We find out what he has learned along the way.

When Brian Gibbons retires in January 2022, he will have been with the AA for four decades; ten years during its mergers into one national Association and, for the last 30 years, as that Association’s only Chief Executive. On his imminent departure, he shares insights of that journey with Kiri Coughlan.

Forty years at the AA is a massive commitment. How did you come to join the organisation?

My formative years were in the motoring industry. I started with Todd Motors in Wellington as an office trainee, progressing to Financial Controller. My next role, with Boots Pharmaceuticals, was also in accounting. When I was approached for the role of General Manager for the then AA Wellington, I saw it as a golden opportunity to broaden my career into general management. It was quite an opportunity, given I was still in my 20s.

How has the Association changed since then?

Amalgamating 15 independent associations into one over the course of a ten year period was the making of the organisation. Prior to that each operated separately, with their own governance model. On a national level the consistency of service was wanting, with each association having its own priorities and service strengths. Coming together three decades ago as one national organisation started the journey of growth in Membership and service diversification.

Thirty years ago the number of AA Members was quite a different story, wasn’t it?

Without putting too fine a point on it, Membership has tripled in size. Once we became a national organisation, Membership began to grow and it has continued to do so over almost our entire history. Today, it stands at over 1.8 million Members. This is amazing when you consider that represents more than half of all licensed drivers and that the Association now has a reach into almost half the households in this country.

And financially the Association was struggling at that time?

Reflecting on those early days following the merger, our financial position could best be described as ‘scraping through.’ We were indebted to the bank, not quite living hand to mouth, but we really had to watch our pennies. My goodness, referring to pennies certainly reflects one’s age! Today it is quite a different story. We’re holding a strong liquidity position, more than sufficient to invest in new services and benefits for Members without the need to even consider increasing the subscription.

How have you managed to do that when the cost of the AA Membership subscription hasn’t gone up for 30 years?

When we realised there was a degree of urgency to address the Association’s financial wellbeing, especially if we were to expand services and benefits, one of the early decisions was to cease our dependency on annually increasing the subscription. A number of former associations had, for too long, relied on the annual adjustment as their primary source of new income and subscription levels had, for some, reached the point of being prohibitive – definitely impacting on Membership retention. To wean ourselves off this dependency on subscription increases, we looked for new income streams, coupled with expanding services into non-traditional areas. Some of those new services we now take for granted in the main service mix; AA Insurance, AA Money, servicing of Driver Licensing to name a few. Facilitating that transition in our development was the realisation that the Association had unique strengths: an unblemished brand reputation, impeccable service heritage and a Membership affiliation second to none. Such attributes others would give their right hands for. At the time of national amalgamation these strengths were the perfect combination to join forces with commercial partners on some of these new services.

You actually coined a term for how you wanted to increase Membership – the Subscription Value Equation. What does that mean?

The Subscription Value Equation is not complicated. It recognises that if you can provide more in benefits and value to Members than the cost they pay for their annual subscription, it presents a compelling case for being a Member. Today, we have no difficulty presenting potential Members with a compelling proposition for Membership and we're always looking to increase that Subscription Value Equation at every opportunity.

What are some of the milestones that you’ll always remember from your time at the AA?

Milestones mean different things to different people. For example, I recall we celebrated when we broke through the milestone of one million Members and we also celebrated when we launched AA Rewards so many decades ago. But if I had to pick any milestones in the context of the Association’s growth over the last 30 years, two particular service developments stand out ahead of others, for differing reasons. The first was launching AA Insurance – a company that today insures over 27% of all motorists in New Zealand and contributes to the Association’s financial wellbeing and diversity of relationship with Members who are policyholders. The second development that comes to mind is the Association’s involvement with the rollout of the new photographic drivers’ licence two decades ago. Today, driver licence transactions are a key service activity across the Association network but the highlight, the milestone memory for me, was how we embraced the new role. It involved, for example, significant capital investment in new technology, increasing our frontline staff, and expanding our footprint of offices and agents throughout the country. All those involved should be proud of the role they played in broadening the Association’s touchpoint with motorists throughout the country, and that successful rollout.

Do you have any regrets?

From a career perspective, the answer is no. This is an organisation unlike any other, motivated by the combination of serving the needs of Members, always to provide excellence in service but at the same time running a business on commercial lines. Balancing those quite different aspirations has presented unique satisfaction in the job. The organisation’s governance model has always been supportive. If I could speak on behalf of the Association itself, I’m sure it would express few regrets, considering how it has faired.

And personally, what’s next for you?

The worst thing about announcing your retirement is that everybody asks what are you going to do next. That is a terrible question if you really don’t know! The AA has been my life and will be missed, but I look forward to what unfolds in the next chapter of my life. What I do know is that until the end of 2021 I will continue in my role as President of the FIA Senate; though I am mindful that I’m standing on a ticket for re-election for that role. Fingers crossed I will be reappointed, as it will ensure I keep abreast of the mobility scene, motorsport and the world of FIA motoring clubs. My wife says ‘don’t think you’re going to get under my feet,’ but that’s not what I intend to do! I will probably become more active, playing golf in my free time. I do know, having been so active heading this Association for all these years, that it will be absolutely essential to keep my mind challenged and active, though one suspects it will be at a slower pace.

With a family of five children was it ever tricky to balance work and life?

It’s interesting, because before we talked about regrets and, on reflection, one of my regrets is that my family has at times paid the price for my role in the AA. When the ultimate merger of all the AA’s took place in 1991, I made the decision that we needed to have Head Office based in Auckland. That meant moving our family from Wellington. Two of our children were teenagers at the time and decided not to come with us. We had to make the tough decision to not all be together at that time. Back then it was simply what was required but, reflecting on it now, it was a difficult time and involved a degree of sacrifice. Sorry kids.

So what has it been like being the CEO?

I have, around the fringes, been involved in the recruitment of my successor. My input, for what it’s worth, is that whoever is appointed needs to have an affinity with people and value a collaborative work environment. That collaborative style has been one of my hallmarks as CEO, contributing to the enjoyment of the role, working with staff and management and also with the Board and National and District Councils. In many ways, my role could be characterised as being the Chairman of the management group. I have no hesitation in making the hard calls and standing by those decisions, but I am a firm believer that seeking the views and input of others ultimately delivers the best outcomes.

What are you hoping for the future of the Association?

Obviously I hope that my successor continues to build on the momentum we have here and to never to lose sight of the fact that the Association is primarily here to serve the interests of Members. The appointee will, I’m sure, come to relish the uniqueness of the organisation, which I have grown to appreciate during my time at the helm. It is now time for a changing of the guard – but a change that in no way derails New Zealand’s largest Membership organisation from looking towards a prosperous future with Members’ interests at heart.

Reported by Kiri Coughlan for our AA Directions Spring 2021 issue

Other stories you may like More My AA stories