I subconsciously fasten the strap of my helmet as we ascend over a striking Waitemata Harbour. The sun’s rays catch the water, creating a blanket of glistening ocean around us.

The harbour’s name translates to ‘sparkling water’ and I can see why.

Soon after embarking on Auckland’s Harbour Bridge climb, my fear of heights melts away with the heat of the day, and I begin to enjoy myself.

I grew up in Hamilton and any excuse to jaunt up to Auckland’s hustle and bustle was always welcome. On the rare, but treasured, road trips up to visit my aunty, I’d press my nose against the window of the family van as we wound our way through tight suburban streets, weaving in and out of shadows cast by high rise buildings. I was captivated by the working women in skirts and stilettos on route to their next meeting or coffee catch-up.

Despite now living in Auckland for more than two years, I’m still getting to know my new city. Today, my friend Jess and I have come to experience its sights, sounds, smells and flavours.

We make our way to Al Brown’s Depot Eatery and Oyster Bar in Federal Street to fuel our bodies. We’re greeted by heat expelled from an open cooker in the kitchen and the aromas of roasted coffee beans mixed with the spicy and smoked scents of breakfast. We take a seat among clusters of colleagues sprawled around sheets of paper and place our order. 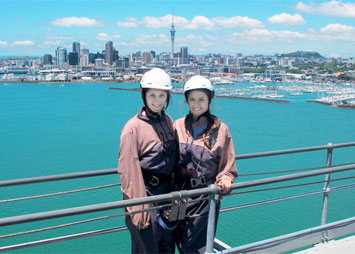 Waiting for our meals, we chat excitedly about the day ahead. We’ve planned to climb the Harbour Bridge, mosey through the Auckland Art Gallery and later, head to Katy Perry’s Prismatic concert.

Climbing the Harbour Bridge is like opening a story book and delving into different tales that make up the city’s history. As we descend into one of the bridge piers, our guide tells us that three engineers, James, James and John, didn’t make it to see completion of their handiwork. The two Jameses plummeted into the harbour while John fell to his death into concrete under the pier. His bones still lie there – fusing into the cement and becoming one with the bridge structure. The group falls silent as we stand directly above where he’s preserved.

“Three, two, one,” they chant. My stomach drops as she does.

“It’s not too late to change your mind and do a bungy jump,” yells our guide. ‘Don’t push it,’ I think, surprised at how well I’m doing considering I prefer my feet on solid ground.

This preference is reinforced when we watch a poor girl tremor over the bungy’s platform: the only object separating her from an empty 40m void. I can smell her fear as instructors talk hard to calm her nerves and count down. “Three, two, and one,” they chant. My stomach drops as she does.

The bridge was used a million times in the month following its 1959 completion. Japanese clip-on extensions were added to either side ten years later to cope with heavy usage, our guide explains. I had never imagined I’d find myself attached to one – the roar of passing vehicles shuddering the concrete only a mere few metres above my head. The clip-ons are designed to move up and down to accommodate movement from heavy traffic or earthquakes.

We’re instructed to rest our elbows on a concrete ledge of the clip-on to feel just how much it moves. Within seconds, my arm travels up above my head and back down below my waist. It’s an eerie feeling and with the heavy grind of traffic above me, the most uncomfortable I feel on the bridge.

The heat of the day pricks at my cheeks as we descend towards ground level. Our next stop’s the Auckland Art Gallery and its thick concrete walls provide just the shelter I need.

Walking through the open space, we take in an impressive range of art that preserves in time a century or more of thoughts, emotions and scenes – inspiring viewers to reminisce or form their own tale or interpretation. German print making reflects the bloody and graphic events of World War II while my favourite pieces, Charles Goldie portraits, show the emotion and character of nineteenth century Maori men and women in photograph-like resemblance.

After dinner at another of Al Brown’s top spots, Federal Street Delicatessen, feasting on scrumptious tapas, we’re ready to take on an evening full of singing and dancing.

Goose bumps form as we jump off our seats and welcome Katy Perry to the stage at Vector Arena, the uproar of chanting and screaming enthusiasts rising with us. How exciting it is to experience a live show and see the energy and passion the pop star exudes for both her music and fans.

Jess, who lives in Wellington, turns to me and cups her hands over her mouth in an attempt to be heard over the heavy bass. “You’ve definitely convinced me to move to Auckland,” she yells.