I’d begun to wonder whether we’d bitten off more than we could chew: 70km in four consecutive days with an 8-year-old and 11-year-old. The days would be long, some of the climbs steep, but the scenery promised to be stunning and it would surely make for a memorable trip.

“It’s the diversity that sets the Queen Charlotte Track aside from many of the Great Walks,” our guide Sean said as the launch sped us across the Sound from Picton to the start of our trail. He would set us on our way accompanying us for the first day then we’d explore the rest of the trail independently.

“The quality and level of the track is great, which helps to make it special,” he added. “And there are superb lodges and accommodation with restaurant-standard food.”

I liked the sound of this.

We disembarked at Ship Cove, the start of our trail, just in time for lunch. In 1770 James Cook based himself here and raised a flag on nearby Motuara Island to claim sovereignty over the surrounding area.

Local Maori had known the Sound as Totaranui (nui meaning big, totara the tree) due to the tree-like shape made by the ‘branch’ inlets, Sean told us. Cook named the inlet Queen Charlotte Sound in honour of King George III’s consort.

We examined the monument that marks the cove’s historic importance before setting off for our five-hour hike. It was 27°C, encouraging a glorious chorus from the cicadas. We wound past giant black tree ferns, silver ferns, supplejack, beech, kamahi and a rimu thought to be 700 years old.

Our daysacks each displayed special passes: passports to complete the trail, which as well as land managed by the Department of Conservation, also crosses privately owned areas.

As we traipsed into historic Furneaux Lodge, 14km under our belts, we were relieved to see our overnight bags at our chalet, having been transferred by boat courtesy of our trek planners, Wilderness Guides.

After a hearty dinner, the children even mustered the energy for a game of tag in the gardens before a solid night’s sleep.

The next day we set off to cover just 12km, packed lunches stashed in our day packs, the wrapping decorated with cheerful messages of goodwill penned by the chef. The path was clear and we didn’t get far before pausing at the head of Endeavour Inlet to learn about the antimony mining industry that had thrived here in the late 1800s.

There were always great distractions for the children, like sighting a pod of dolphins swimming in the bay later that day or, on a much smaller scale, watching a parasitic wasp drag a spider twice its size across the path. Since generally walkers tackle the trail in the same direction, we rarely saw other people, but every five kilometres a wooden marker highlighted the distance remaining.

Large chunks of the path wound beneath cooling tree canopies with frequent, tantalising glimpses of the inviting shoreline beneath. Later that afternoon through a veil of ferns, we caught sight of beautiful Punga Cove Resort, where we’d be spending the night. 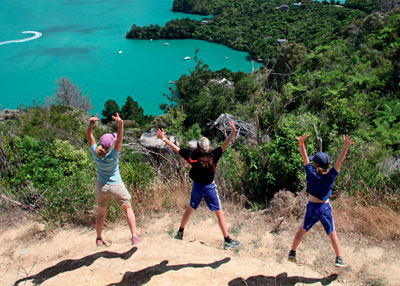 Its jetty was to be the entertainment on our arrival as the children leapt from its sun-baked boards into the refreshingly clear waters of Queen Charlotte Sound. Their squeals echoed across the bay. It was the
pool and hot tub to which I retreated and later the hammocks, hung in shady spots, before heading to
the hillside restaurant with its stunning bay views.

Despite a peaceful sleep, on day three our youngest, Charlie, needed a rest. The team at Wilderness
Guides had wisely built in a contingency plan. We were due to cover 25km that day but for those
too tired, boat transfer was available to our next port of call, Lochmara Lodge. One parent could complete the trail while the other could accompany tired children to spend the day at the lodge instead.

Jasmine was determined to walk the entire route with me. We set off straight from breakfast to rejoin
the official path for our sternest test. There were steep climbs but we’d stop regularly to admire the view. We were grateful for the cloud today – it promised to keep temperatures reasonable as we tramped through forests of pine, thick carpets of needles covering the path. Every now and again the carpet would switch: beech leaves, or back to pine needles, and we’d realise we’d been so focussed on our feet we’d not noticed the change in forest through which we were winding.

At times my energy would wane but I was spurred on by Jasmine striding ahead, arms swinging.
Apparently while I’d be thinking how steep some sections were to climb, she’d be assessing how great they’d be to mountain bike down (mountain biking is allowed on the track except during the busy summer season between December 1 and February 28 when Ship Cove to Kenepuru Saddle is closed to bikes).

Some ridges gave views of both sounds either side and, on occasion, Cook Strait ferries would emerge from between headlands.

Our eight-hour tramp ended at Torea Bay, where Wilderness Guides had scheduled a water taxi to take us to Lochmara Lodge to meet our boys.

We arrived exhausted to find a very excited Charlie brimming to tell us about his own adventures, which had included helping the beekeepers collect honey from the lodge’s hives. He and Tim had also been kayaking, ridden the giant flying fox, helped feed eels, got to know the resident kakariki and explored the artworks dotted around the lodge grounds.

We should all have gone straight to bed after our evening meal in the art gallery restaurant but the lodge’s owner Shane told us of phosphorescence in the waters here. We stayed up until dark to witness
its magical lightshow.

Waking the next morning to the sound of tui and the hotel’s free-range chickens, I wondered if Jasmine’s legs could possibly carry her any further. But as we walked up through the lodge’s grounds, past sculptures and tempting hammocks slung from giant ponga ferns, she and Charlie showed no signs of tiring.

Having enjoyed Lochmara too much, we’d left later than recommended and despite some speedy footwork, ended up running much of the last six kilometres to catch the boat. It was with regret
that we didn’t have time to linger and enjoy the views through the giant beech trees, as the path hugged the emerald coastline.

We must have looked a funny bunch as we hurtled through peaceful Davies Bay campsite and then into Anakiwa full throttle, beaming smiles, just in time for the boat to Picton.

The children’s sense of achievement was immense – as was our own.