There’s a saying etched into the pavement below Auckland’s Sky Tower.

I’ve walked past it on my way to work but never fully understood its meaning until visiting Utah.

‘Raise your eyes to the mountains for guidance,’ it reads.

I’m reminded of the words as I stand in the middle of The Narrows which flows through Zion National Park in southern Utah, USA.

It’s here, for the first time, I feel the energy and stability of the mountains. The sheer size of the amber rock formations gives me a sense of comfort and confidence.

I trudge through the flowing water.

It’s early January, America’s winter, and fresh snow lays in clumps along the freezing stream. The mid-morning sunlight ignites the heavy dustings of powder deposited on the ridges of the canyon walls towering above me. In warmer months, it’s a rock climber’s paradise.

Now, the winter wonderland is a haven for experienced hikers, offering an extra special experience in snowfall. My sister Kerry and I have joined Zion Outfitter for a walking tour through the national park, our guides Daisy and Mike leading the way. I’m thankful for the waterproof booties and pants we pulled on beforehand, allowing us to walk long distances comfortably in the cold climate.

Ahead, Daisy and Mike signal for us to hush our chatter. Approaching as quietly as possible, we spot a deer drinking from the water’s edge. He looks up, unfazed, as we pass; his tawny coat is barely visible in the snow.

A pub lunch down the road warms us up after our intrepid morning. Ordering American favourites, nachos and chilli fries with lashings of cheese and a refreshing soda, we chat to

Daisy and Mike about life in the south. They are like many other Utah locals: warm and welcoming. It’s as though they’re friends we’ve known for years, despite only meeting a few hours earlier.

After lunch, Kerry and I explore the town centre. Wooden shop fronts display crystals, gem stones, feather dreamcatchers and art depicting horses and Native American Indians. All the while the glowing ravines protect us from afar.

“Ya’ll probably too young to remember but the film Butch Cassidy and the Sundance Kid was filmed ‘round these ways,” a store owner tells us. Coincidentally, my mother made me watch it a few months ago.

I turn up the radio and have to admit the twang of the banjo is an apt soundtrack for this journey. Tall, red stalagmites rise from the ground; we wind through natural archways. 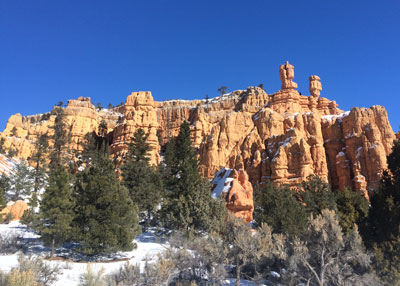 Icicles drip from tree branches coated in snow so thick it’s like fondant. We can’t muster any words as we gaze across Sunset Point; our only reaction is to smile wide. The canyon quite literally leaves us speechless. It’s deep and vast.

‘Who knew snowflakes were real?’ I think while sitting atop the chairlift at Park City’s Deer Valley Resort.

I don’t say anything in fear of looking silly, but sit in silence, watching in awe as shards of brittle stars float onto my jacket. I’ve only ever seen lumps of ice fall in New Zealand, not these intricate formations.

Whizzing down the slopes of the skiers-only field is a thrill and the powdery conditions aren’t what I’m used to on the often icy Mt Ruapehu back home. I zig-zag past beautiful homes unlike any I’ve seen before. “That’s one of Sylvester Stallone’s holiday homes,” a fellow skier points out.

Reaching Park City, a quaint village less than an hour’s drive from Salt Lake City, is like stepping into a fairy tale. The township is nestled among towering snow-capped slopes home to the popular ski resorts, Deer Valley and Park City. Once skiers and snowboarders have received their dose of mountain air, they can  take their final run straight into the  village for a warm sip of coffee and bite to eat.

Couples, friends and families unclick and dismount their skis and trudge along the snow-laden cobbles; the white mist catches the fur trims on their stylish coats.

Beautiful boutique clothing and shoe stores and cafés line the sidewalks. We pop in to Atticus,
a welcoming café that I hear serves a delicious matcha latte. I sip the creamy green tea and browse a display of giftwares. A group of young women walk by with rolled-up yoga mats tucked under their arms and suddenly I can see myself easily fitting into the active Park City lifestyle. 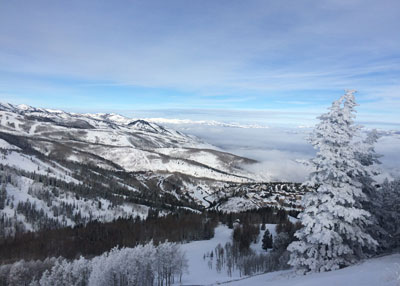 Sitting in the spa on the deck of our room at nearby Newpark Resort is the perfect way to unwind and soothe achy bones after the morning on the slopes. It’s made even more memorable with falling snow.

Later that evening we rug up warm and head back into the village for dinner. Banners hanging from streetlights advertise the annual Sundance Film Festival, where actors and directors celebrate screen talent. It’s a shame we’ll miss the action which kicks off late January, but it’s just another reason to come back.

Between mouthfuls of scrumptious organic and locally-sourced tapas at Handle restaurant, we chat about the many ‘firsts’ we’ve experienced on our trip. There are the striking landscapes, wildlife, and the snowflakes – I confess. We both agree it won’t be our last time here.

Reported by Monica Tischler for our AA Directions Autumn 2017 issue

For more information or to make sure you're covered before setting off, see:
visitutah.com/au
aa.co.nz/travelinsurance