Peter James Quinn finds many riches on the West Coast

I am standing atop one of the tallest man-made structures on the West Coast and the views before me are breathtaking. From the circular platform of the 40-metre-high Hokitika Tower I can take in a panoramic sweep of native beech forest, the Southern Alps’ jagged spine and, off to the west, Lake Mahinapua, with a hint of the shimmering ocean swells marching across the distant Tasman Sea. From this altitude even the giant podocarps, some up to 600 years old, are dwarfed by the Treetops Walkway tower.

I descend its spiral staircase to a lower level and follow the steel path out onto the cantilevered Mahinapua Spring. At this elevation I’m closer, at arm's reach of the forest canopy, surrounded by ancient rimu, totara, kahikatea and miro – whose ripe red berries are a favourite of the kereru, the native wood pigeon.

Mahinapua lake and its surrounding forest have been a drawcard for tourists since the 1860s when gold miners to the district came for recreation; boating regattas and picnics were regular outings for the pioneer settlers of Westland. By the end of that century, conservationists recognised it needed protection and the wetland was gazetted as a mainland reserve in 1907 – one of New Zealand’s earliest.This new addition, providing access to the treetops, adds to the tourist experience in a safe, inclusive way. 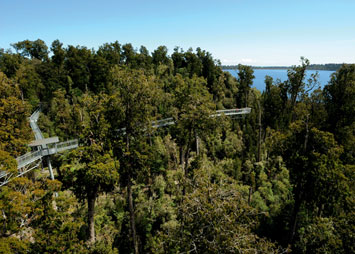 Back in nearby Hokitika township, I call into The Gold Room on Tancred St, where owner Barry Rooney is at work crafting genuine natural West Coast nuggets into fine specimen jewellery. Barry explains that the alluvial gold still won from the district is some of the purest in the world, at between 94 and 98%, denoted by its rich yellow colouring.

The country’s largest nugget, the Honourable Roddy, named after the then Minister of Mines and weighing in at a whopping 3.09 kilograms, was discovered at the nearby township of Ross in 1909. It was gifted to King George V for his coronation, thus contributing a substantial lump of the West Coast to the crown jewels.

Hokitika was founded on a gold rush in 1864; that Roddy nugget would hardly have been missed, considering the amount of gold unearthed there. In the first year, the easiest gold was found lying along a 50km stretch of the beach, having washed down the rivers. The black sand had around 3000 hardy miners working it, sifting it through shuffle boxes and long toms to separate their winnings.

By 1867 Hokitika was the colony’s busiest port, with some 37,000 gold seekers disembarking at Gibson Quay over three short years. Eighty-four hotels mushroomed along the crooked dog-leg main street named after William Revell, the goldfield commissioner who surveyed it.

Dance halls and billiard rooms, shooting galleries and skittle alleys, concert rooms and an opera house, barmaids and ladies of ‘relaxed virtue’ all crowded along Hokitika’s golden mile, vying to entertain the hundreds of diggers on a spree. Some called it ‘the most rising place on earth’, such was the town’s astonishing rate of growth.

Though modernised in places, Revell St retains much of that frontier town countenance, its wooden facades and Wild West features. Fat Pipi Pizzas occupies one such rusticated premises and I pop in one evening to sample the signature dish – a quarter pound of freshly-caught whitebait (in season) and egg folded on a pizza base with garlic, mozzaralla and capers. I’m told some travel over the mountains from Christchurch especially for this meal.

Around the corner on Hamilton St, opposite Hokitika’s Museum which is housed in the century-old Carnegie Library building, is the lovingly restored Teichelmann’s B&B, former home and medical practice of Ebenezer Teichelmann. Glass-plate photographer, conservationist and, as his day job, superintendent of Westland Hospital, the man known to Hokitika residents as The Little Doctor was also a climbing dynamo, with two peaks along the Main Divide named after him.

Present-day owner of Teichelmann’s, Brian Ward, frequently masquerades as the doctor. Donning knickerbocker pants and stockings, fedora hat and tweed coat, he guides his guests and other visitors around Hokitika’s heritage precinct offering an informative history of the goldfields capital in its heyday.

Though quieter now than during its bustling beginnings, there’s still plenty of riches to discover in this cool little riverside town.