Alice Galletly laughs off a weekend at sea

When I was invited to spend three days aboard a cruise ship called Pacific Pearl, the word that came to mind was “luxury”.

I pictured eccentric elderly ladies dripping in diamonds and furs; white-gloved waiters lifting lids from silver platters; Leonardo DiCaprio painting me like one of his French girls.

The vision was smashed within my first four minutes at sea.

This is the time it took for ‘90s club anthem Absolutely Everybody to play from the deck’s speakers, while a dozen dancers in hot pants performed a hula-hoop routine around the pool.

Beside them, a meringue-like bride with ‘Scallywag’ tattooed down her arm gyrated on her new husband, while her maid of honour (with matching tattoo) held up her train.

Despite the grey skies and chilly wind, all the guests were drinking tropical cocktails from fluorescent plastic cups – and most people looked to be on their second, third, or fifth rounds.

It turns out you don’t need to be old or rich to go cruising these days, thanks to affordable short-break packages like the one my boyfriend and I were on.

This was a three-day, comedy-themed cruise, where the focus was less on the destination (we started and finished in Auckland) and more on the onboard entertainment and bar facilities.

Most of the guests still had all their teeth, and were celebrating birthdays, anniversaries, or in the case of the scallywags, an actual wedding. Absolutely everybody was there for a good time.

I had planned to spend my hours aboard the Pacific Pearl staring contemplatively out to sea, but there were much more exciting things to do.

The timetable delivered to my room each morning showed at least five activities happening simultaneously at all times, the majority of which were free. I could learn to line dance before lunch, play bridge in the afternoon, and become an expert at making cocktails before dinner. I was intrigued and tempted by something called a ‘free champagne botox party’, but opted instead to smooth my fine lines with a facial in the ship’s spa.

Of course, all this was just filler for the main events: the daily comedy shows, which were held in the ship’s impressive tiered theatre.

We started with mind reader Anthony Laye, who coaxed audience members from their seats and subjected them to embarrassing psychological tricks.

Then there was self-described ‘smoking, drinking, farting’ comedian Bev Killick, who used the F-word with real finesse.

Self-deprecating Tommy Dean, a long-haired, slacker dude with a deep Arizonian accent, was the funniest by far, while the guy who sang parody rock songs about toilets and foreign taxi drivers was too bad to mention by name. 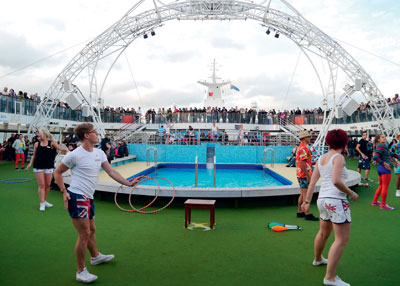 The audience, who were very merry by the time the 11pm show times rolled round, roared and hollered through all of the sets, but never so loudly as during Bitchin’ Bingo.

Host Mistress Viv wore a towering red beehive, fishnet tights and hot pants, and had a Westie-themed rhyme –“twenty-two, honeymoon in Manawatu!” – for every number.

At one point she asked us, “Is anyone here from West Auckland?” and the cheers were so thunderous you might have heard them from land.

Like the comedy, the food on board was of varying quality, but even the fussiest of foodies (me included) were catered for at the Salt Grill. This was an intimate little restaurant with white tablecloths and dim lighting, where I gorged on marbled scotch steak, truffle fries and licorice parfait. I can tell you, it was hard to go back to the buffet after that.

Saturday was formal night aboard the Pearl and I was hoping this was the time to glimpse some old-world cruising glamour. Sadly, it wasn’t to be.

Interpretations of the term ‘formal’ varied wildly, and on the way to the restaurant I saw everything from short, sparkly cocktail dresses to stubbies worn with rubber jandals.

My hopes lifted briefly when I spotted what looked like a tuxedo from afar, but on closer inspection turned out to be a tuxedo printed on to a felt onesie.

With so many distractions it was easy to forget we were on the ocean.

With so many distractions it was easy to forget we were on the ocean, but then, on the third day, we sailed past something more thrilling than anything on the programme.

I was busy losing a game of bingo and might have missed White Island entirely, were it not for the intense smell of sulphur that stunk up the ship. I rushed on to the deck – pausing to adjust to the natural light – just as we passed the island’s gaping, steaming crater. Maybe it was because I had essentially spent three days indoors, but nature never looked so impressive.

By the last day at sea we were pro's of the Pacific Pearl. We knew where to sit at the comedy shows (as far back as possible, so as not to be picked on), and at what times of day the café would be converted into a laser disco. We had managed to locate the ship’s only stash of English Breakfast tea bags and had very nearly got the hang of finding our cabin.

I had a sense, by the end of it, that this wasn’t quite the right cruise for me, but that there had to be one out there. Were there any wine-themed cruises, I wondered? Or cruises where we just lie around reading our books in the sun? Throw in a few rounds of bingo, I thought, and I could definitely go for that.

Reported by Alice Galletly for our AA Directions Spring 2020 issue