Kathryn Webster ventures from Auckland to Northland on a day trip.

Lighthouses, compete with cranes, chains and steps perch on carefully rendered rocks; elsewhere in the golden room are detailed boats and a castle. There are hundreds of kauri gum lumps in their natural form, too – shiny and liquid-looking, streaked, smooth, flecked, some darkened by bush fires – all beautiful, glowing and filled with light.

The gum is just part of the story of The Kauri Museum – a massive, impressive project showcasing the glorious kauri tree and the history of a district which thrived on its gifts of resin and timber.

Over several galleries we learn about the gum diggers, timber milling and local early settler lives. 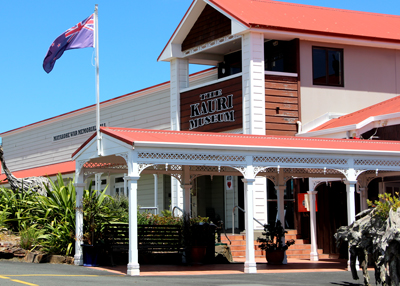 We wander past frozen scenes of days gone by: tables set with willow pattern china, fireside spinning wheels, mannequins posed at play, dressing for marriage, rocking cradles. Close up, we inspect colonial furniture, boats, trinkets and ornaments made from kauri. Photographs show massive trees before they were felled; others tell the stories of Matakohe families, Kaipara communities, Ōtamatea’s progress.

The evidence is fascinating. Freakishly big planks, a bush tram loaded with a log nearly eight metres in girth and at its end, its rings showing the time-line of history over the tree’s 800 years of growth. There are huge, ungainly saws and spiked poles and models of bush dams, learning that the booming of logs as they went over the dams would have been heard for miles around. There’s a full-size sawmill, driven by steam engine – one of many examples of truly impressive engineering.

In another gallery, a boarding house has been reconstructed, providing the backdrop for more scenes of life. History moves closer to today with displays of coopering, milking sheds, workshops with small engines running pumps, lathes and other tools. 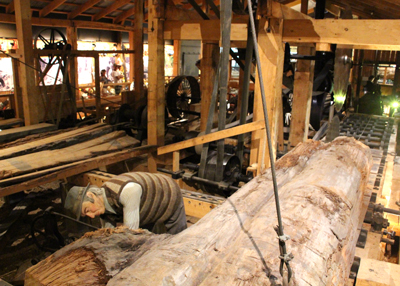 There’s a lot to absorb; some visitors take advantage of their entry ticket being valid for two days but we were on a day trip. We’d driven two hours from Auckland, stopping for coffee at Kaiwaka and secondhand shopping at Paparoa; on the way home we stopped for food at Matakohe and a swim at Wenderholm Regional Park just north of Ōrewa.

In many ways it was the perfect outing, incorporating history, culture, a little bit of retail and time on the beach. And home before dinner.