A sight to behold: the Southern hemisphere skyscape is faithfully recreated above The Civic auditorium. © Auckland Live

New Zealand is renowned for its scenic beauty and a plethora of outdoor adventure opportunities. But what if you’re in one of our main cities – it’s evening and it’s raining? Why not go to the theatre!

New Zealand’s professional theatre has grown from humble beginnings in the early 1960s into a vibrant and flourishing sector of the entertainment industry. Auckland, Wellington, Christchurch and Dunedin all have resident professional theatre companies, and there is a wide range of theatre experiences on offer for visitors.

It's been an awesome year at Q, with lots of reasons to celebrate. We are now officially closed for the year. SUMMER HOURS While we're on break, you can still book tickets online 24/7 through our What's On section www.qtheatre.co.nz/whats-on WE RE-OPEN Box Office: 10am Tue 10 Jan Citizen Q: 8am Tue 10 Jan JAN 2017 OPERATING HOURS Box Office: 10am - 4pm (Mon-Fri) Citizen Q: 8am - 3pm (Mon-Fri)

Naturally, Auckland, being New Zealand’s largest cosmopolitan area offers the most comprehensive range of excellent theatre experiences, many of them centred around Aotea Square in midtown. You’ll find funky, emergent and cutting-edge theatre at the Basement Theatre in Lower Grey’s Avenue and Q Theatre nearby.

How does THAT work???

The Aotea Centre which sits right on the square hosts big operas and Royal New Zealand Ballet on their main stage and work by independent companies (notably Silo Theatre) in the smaller Herald Theatre.

Aotea Square is about to come alive again with music, dance, workshops and general good times as Auckland Live Summer in the Square returns on December 1! Head to aucklandlive.co.nz for more info. See you in the square! #summerinthesquare #aoteasquare #AKLsummer

The Aotea Centre and the square itself becomes the heart of Auckland Arts Festival in March each year. Nearby the iconic, heritage gem the Civic Theatre hosts large touring shows and musicals. At Takapuna on the North Shore you’ll find the Bruce Mason Centre, named in honour of the New Zealand playwright, who grew up in the area and whose most famous stage work, The End of the Golden Weather is set on nearby Takapuna Beach.

In recent years Auckland has begun to realise what an asset it has in its waterfront; Viaduct Harbour and the Wynyard Quarter (both joined by Te Wero bridge) have become a popular entertainment district with a proliferation of restaurants and bars and outdoor performances.

Wellington’s compactness makes it an ideal festival city and in March (of each even year) Wellington pumps with the New Zealand International Arts Festival. The Edwardian heritage Opera House and nearby St James Theatre (home of the Royal NZ Ballet) host the major international and local work.

Wellington’s resident theatre company, Circa, is situated next to the National Museum, Te Papa, on Wellington’s lively and eclectic waterfront. Circa offers a wide range of theatre experiences year-round in their two theatre spaces and at the end of Courtenay Place (Wellington’s entertainment strip), you’ll find cute little Bats Theatre. Recently renovated with help from filmmaker Sir Peter Jackson, Bats hosts three small theatre spaces and a charming little bar. Here you’ll find some of the capital's most adventurous and innovative theatre.

Christchurch’s devastating earthquake five years ago hit the city’s arts scene badly, with companies like Court Theatre and Southern Ballet losing their homes in the iconic Victorian arts centre. However, kiwis and theatre-makers are ever resourceful and the Court’s new premises in Addington has proved very popular with audiences. It was heartening to see that one of the first buildings to be completed in the massive city rebuild was the beautiful Issac Theatre Royal in Gloucester Street. Here they host international touring shows, plus tours from the Royal NZ Ballet and NZ Opera Company.

Further south in Dunedin, the historic Regent Theatre sits right in the centre of the Octagon. And just a block up steep Stuart Street you’ll find Fortune Theatre, the city’s resident professional company.

January tends to be the fallow month for performance in New Zealand – when all the theatre-makers (like the majority of kiwis) head to their baches or holiday houses for the summer break. However there are often outdoor performances of theatre and music in park settings, so check the local council website for what’s on offer.

Why not put some cultural zing in your New Zealand holiday and include a show or two on your itinerary. You’ll enjoy the experience.

Need a place to stay in Auckland? 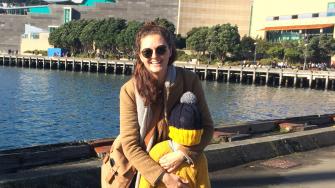 Need a place to stay in Wellington?

Auckland nights: eight dinner and show bundles for every mood and budget

The best evenings in Auckland blend great eats and entertainment... Read the story . . .

How often do you get to see a city in the midst of a complete transformation? Christchurch today is different from the experience of Christchurch last month, next month and certainly six years ago. Read the story . . .

Dunedin city: Edinburgh of the south

Need a place to stay in Auckland?

Need a place to stay in Wellington?