Get outdoors: five cute campgrounds on the Kaipara

With 800 kilometres of convoluted coastline, the Kaipara Harbour is the largest harbour in the Southern Hemisphere.

There are numerous quiet hamlets with houses spread around a wharf and beach. Days are marked by the ebb and flow of the tide – the times a boat can be launched, the best time to fish and the high tide for swimming. And there are sweet camping grounds and reserves for an affordable, tranquil escape.

Shelly Beach Reserve Camp, on the south Kaipara Peninsula, is next to the water and protected from the south-west winds by a bush-covered hill. What one does here, besides escape Auckland, is relax, fossick for shells, watch birds, stroll or fish off the end of the long wharf. A bonus is The Jetty, a terrific licensed café.

There are two heroines at Pahī, in central Kaipara. One is the 150-year-old Moreton Bay Fig tree, rumoured to be one of the biggest in the world at 30 metres and 54 metres wide. It’s ginormous and its myriad of branches have given it the perfect-tree symmetry of a giant, dark green, half-ball.

The other heroine is not quite so old but stately none-the-less. Pahī Pub was built in 1905 but now a much-loved private home. The camping ground is perfectly placed, waterside, between these two.

At the top of the tide boats whizz off for fishing and the wharf becomes a jumping platform for teenagers. There are delightful walks around Pahī.

Tinopai is on the edge of a bluff where the Ōtamatea River joins the main Kaipara Harbour. There is a pleasant but basic camping ground next to the community hall, with a stretch of sites along the waterfront. The focus of Tinpoai is the wharf where, depending on the tide and the season, fishing, swimming and looking at the ebb and flow are the main activities.

There is a hard-case marina up a side creek. It’s home to anything that could roughly be called a boat; fishing boats, a couple of conventional runabouts, a house-boat, and some semi-wrecks which use the marina as their retirement village.

Glinks Gully is on the ocean side of the peninsula that separates the north Kaipara Harbour from the sea. The campground is in a sheltered valley just 100 metres from where huge waves roll onto an expansive West Coast beach.

This is the place for those who like the windy, wild, west coast, with its tempestuous ocean and brave folk who want to drive New Zealand’s longest beach road.

The campground at Pōuto, on north Kaipara Heads, stands on a hill above the harbour. The views of harbour and sky are terrific.

The attraction, for us, was the beach walk to Pōuto Lighthouse. We stopped to admire a seal and look at a car that got stuck five days before, already it had sand up to the windows.

The lighthouse was built in 1842 to guide sailing ships across the Kaipara’s treacherous bar but now it’s a historic place. It’s still a thing of beauty; tall and elegant, bright white with a cute porch and a red dome. 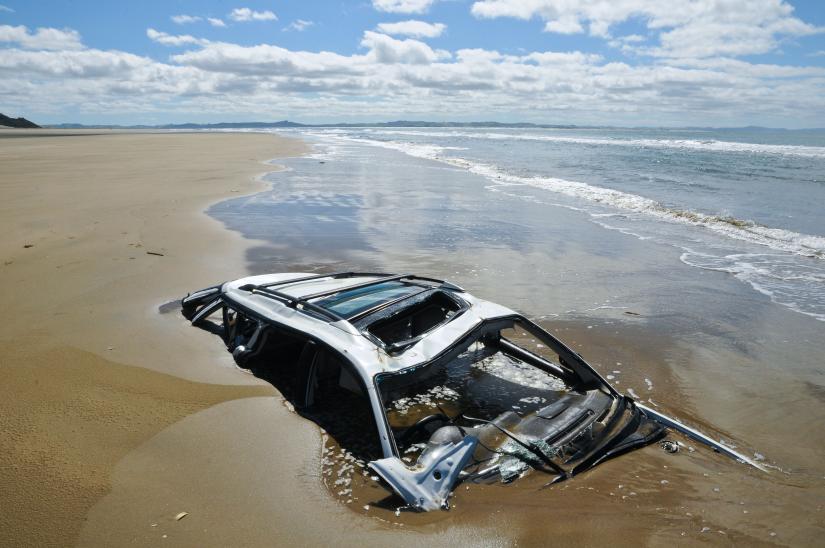 It is a magical experience to drive the winding highway through Waipōua Forest, past giant trees which encroach onto the asphalt in places. You don’t want to be in a hurry here. Read the story . . .

Loved by the locals: Hokianga

From impressive geology to even more impressive kauri trees, cafés, churches and cycle trails – here are five great things to do in Hokianga. Read the story . . .

Winding up the west coast from Auckland City to Northland, this road trip takes in remarkable landscapes, art, heritage and creative spaces. We've picked our top five things to see and do along the way.   Read the story . . .

Tāne Mahuta: lord of the forest

Northland's famous kauri, Tāne Mahuta may be up to 2500 years old which is really getting on, even in tree years. Read the story . . .