Mist hung over the tops of the jagged peaks of The Remarkables, enhancing their mood and mystique.

The forecast had been ambiguous, suggesting four seasons in one day. Knowing how dramatically conditions can change in this part of the world, we left nothing to chance and carefully laid out our clothes the night before – layers of merino wool along with waterproofs, wind-proof pants and jackets, tramping boots, double-thick polar fleece neck warmers, goggles, sunglasses, beanies, mittens, sunblock and a few extra layers for good measure just in case we got stranded on the mountain...

Our guide, Shaun from NZ Snowshoe, nodded his approval at our superb state of preparedness when he collected us from the Jagged Edge just out of Queenstown bright and early next morning. (We purred under his praise.) When we went to collect the other members of our party that day, a couple of young Australians, we thought there must have been some mistake. Perhaps wrong place, wrong couple or maybe the pair had decided against the trip and were heading to the gym instead... There they were, waiting in the car park, hatless, gloveless, wearing shorts, cotton T-shirts and flimsy trainers.

Shaun didn't even flinch. We were flabbergasted at their attire but he had seen it all before and had the situation totally under control. Out came the full kit of backup gear, from boots and jackets to beanies and gloves. We saved the ribbing until we got to know them a bit better and then the Kiwis versus Aussies banter was all on. They were worthy adversaries and great company.

As skiers of many years, we take for granted our right to commune with mountain tops and view spectacular landscapes from lofty heights. But our Aussie friends had never been near snow before, nor had they ever driven up mountain roads so they were wide-eyed with wonder.

The beauty of snowshoes is they provide practical, easy, stable and safe access to snow-covered mountains normally the domain of skiers, snowboarders and climbers.

Mastering the skills required for snowshoeing took all of 20 seconds: grab a set of snowshoes, fasten them to any sized boot with the stretchy rubber straps, click the raised-heel into place if there’s a climb ahead – ‘your calf muscles will love this nifty device’, says Shaun – grasp a pair of height-adjustable hiking poles, which allow the forearm to be at right angles to the body, and head on up the mountain. If you can walk, you can snowshoe... 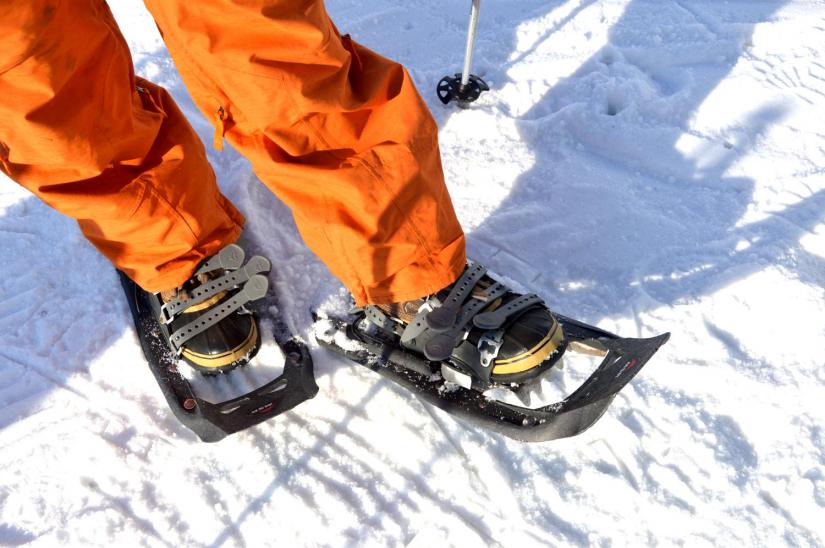 Traversing demands a slightly different technique, involving the rolling of the ankle to flatten the snowshoe on the surface of the snow and to dig the spikes into the snow. As a skier programmed for decades to edge into the snow, it felt a bit unnatural at first but was highly effective in eliminating any slip factor. 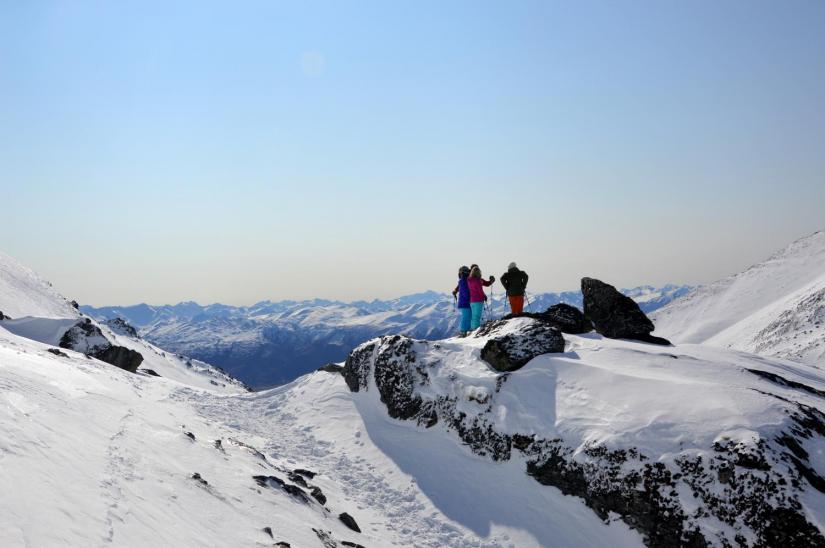 I also had wicked thoughts about how easy it would be to jump on the chairlift: more skier-brainwashing!

After 40 minutes of easy but steady climbing, we left the ski field far behind and reached the startling white wilderness of Laka Alta, nestled in a glacially-scoured cirque below the black crags of the Remarkables. I gazed up at the deeply furrowed face, gouged and scarred by the mighty glaciers that had shaped the landscape over the past two million years. I’ve always regarded the mountain as semi-sacred so it felt quite surreal to sit there on a ledge just below the summit, eating lunch. 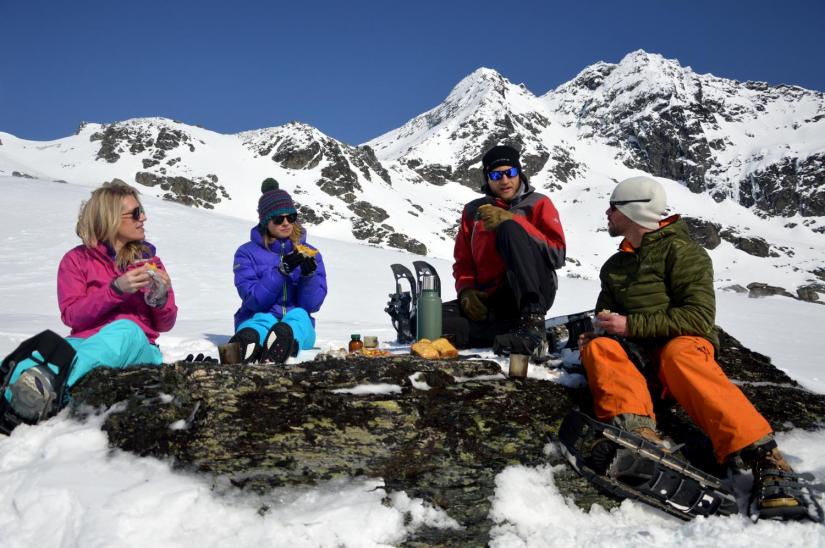 Snowshoeing dates back 5000–6000 years to Central Asia and North America where snowshoes were essential footwear for fur traders, trappers and anyone whose life depended on the ability to get around in areas of deep snow. Traditional snowshoes had a hardwood frame with rawhide lacings.

When Similaun Man or Ötzi the Iceman, who lived 3300 years ago in the Chalcolithic Age was discovered in 1991 frozen in the Ötztal Alps on the border between Austria and Italy, he was wearing what archaeologists believed to be bearskin and deer hide boots and snowshoes made from wood and animal hide. Europe’s oldest-known natural human mummy probably used the snowshoes to get around as a high-altitude shepherd.

On our descent, we visited a snow cave Shaun and the other guides use when the weather turns nasty. Perhaps Ötzi and his flock also took shelter in such a cave if they were stuck in a blizzard in the Alps. 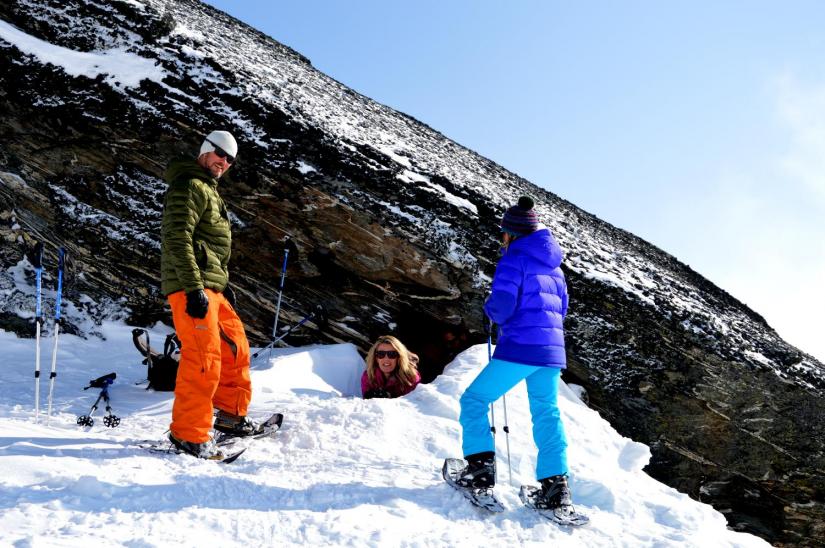 Further down the mountain, the Mountain Safety Council was conducting avalanche awareness and rescue workshops. A group of exuberant school boys were digging snow caves and indulging in the inevitable snowball fight or two.

The weather had cleared during the day and the view of the Wakatipu Basin enclosed in a necklace of mountains was magnificent. I was astonished at the scope of the panorama – Lake Wakatipu, Lake Hayes, Queenstown, Frankton, Arrowtown, the Kawarau River, the Shotover River, Mount Earnslaw, Coronet Peak, Ben Lomond, the Crown Range, planes taking off and landing at the airport, rainbow-coloured paragliders sailing by, a flash of bright red from the plumage of a kea...

After six and a half exhilarating hours of healthy, hearty activity high in the mountains, we reluctantly returned to civilisation.

A mulled wine and a soak in the Jagged Edge spa pool were top of my agenda.

Ensconced in bubbly warm water as the sunset painted the snow on the Remarkables pink and gold, I had a deep sense of satisfaction at having hiked to such heady heights... without the aid of a chairlift. Just a pair of legs aided by the modern version of a 6000-year-old attachment to the feet. So simple, so efficient, so much fun. I don't think I've ever slept quite so soundly. I bet our Aussie mates slept well too. It must be that sweet mountain air.

Justine Tyerman is an award-winning Kiwi travel writer, journalist and sub-editor with 20 years' experience in newspaper, magazine and freelance work. She has travelled extensively overseas but her love affair with her own country, especially the lakes and mountains of the South Island, deepens with every hike, bike, flight and road trip she makes.

Show me more by Justine Tyerman

New Zealand’s only dedicated cross-country ski facility, located on the Pisa Range above Lake Wānaka, has over 50km of tracks and peerless views of the Southern Alps. Read the story . . .

Tumbling ridgelines drop steeply to tawny valleys. Spring blossoms along the roadside contrast with the snow covered mountains, glowing like beacons at the head of the valley.  Read the story . . .

Few people find themselves out in the mountains at night, so quite apart from the skiing, just being on the slopes under the stars is an unusual and affecting experience. Read the story . . .

Justine Tyerman is an award-winning Kiwi travel writer, journalist and sub-editor with 20 years' experience in newspaper, magazine and freelance work. She has travelled extensively overseas but her love affair with her own country, especially the lakes and mountains of the South Island, deepens with every hike, bike, flight and road trip she makes.

Show me more by Justine Tyerman