It was an underground cosmos full of glowworm galaxies, like looking at the roof of the universe.

To sit in a boat deep beneath the Fiordland peaks and see glowworms reflected in the still water was a truly magical experience.

The trip to the Te Anau Glowworm Caves began in Te Anau with a boat ride across the lake. It was a brilliant day to be on the water – sunny and smooth – and we sat on the top deck, open to the wind and sky.

The catamaran flew across the lake, making a detour around the scenic Dome Islands – markers of past glaciation. We only caught only parts of the onboard commentary, as the roar of the wind and engines dominated the sound from the onboard speakers. But even if we had heard clearly, we probably wouldn’t have paid attention – we were too enthralled by the beauty of the day and the view of the sheer mountain faces raising out of the water.

UNESCO knew what they were doing when they established the area as a World Heritage Site. 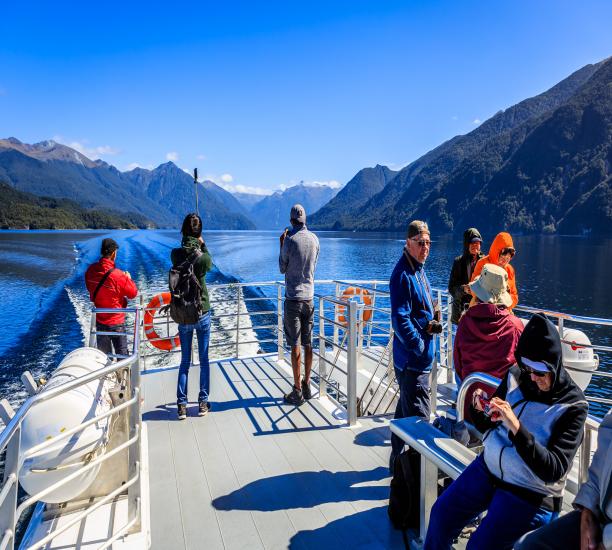 Enjoying the views from the top deck. © Nicholas Allen

We arrived on the other side of the lake, at a large jetty extending out of the bush – an invitation to explore.

Across the delta of a small stream, we ventured to the bush-hidden Cavern House for a presentation about the caves, the glowworms, and what to expect when we went underground. 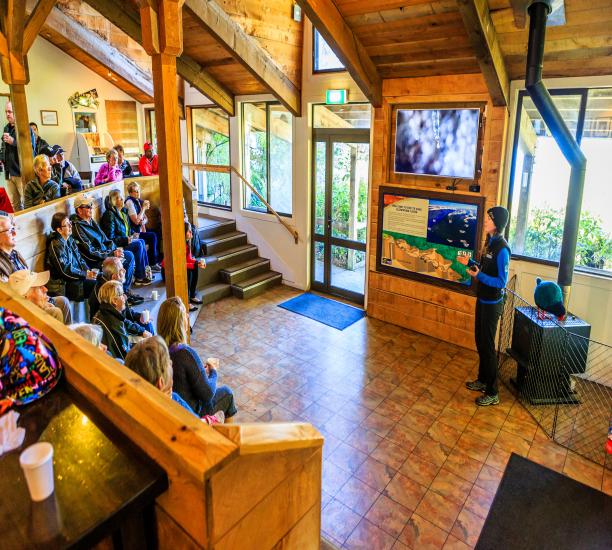 Introducing us to the caves and glowworms at Cavern House. © Nicholas Allen

The glowworm caves are close to the shoreline, so the path from Cavern House to the mouth of the cave was just a short walk through magnificent beech forest before the track descended between the rocks and into the cave mouth, low and covered in rich Fiordland moss.

Inside, the cave was remarkably well lit, with most of the lights focused down into crystal clear water that cascaded and swirled through finely sculpted limestone bowls and waterways. It was a river of light that painted the roof with moving ripples and waves.

The path wound through the cave and up the waterfalls. With no steps and sturdy handrails, people of any age or ability could walk this track. 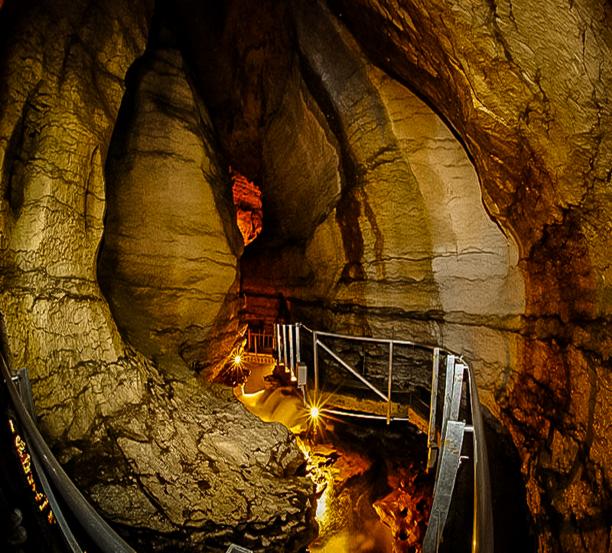 The path through the cave, above the light-lit stream. © Real Journeys

At the top of a large waterfall, I could see the water plummeting over the edge through the grating beneath my feet.

A boat appeared out of the inky blackness and we clambered aboard. As we pulled away from the platform, all the lights turned off. We were suddenly in the pitch black, the only sound, the roar of the waterfall.

My eyes slowly adjusted to the darkness of this subterranean world. Titiwai, the Māori name for a glowworm, captured the astonishing beauty before me: 'lights reflected in the water.' 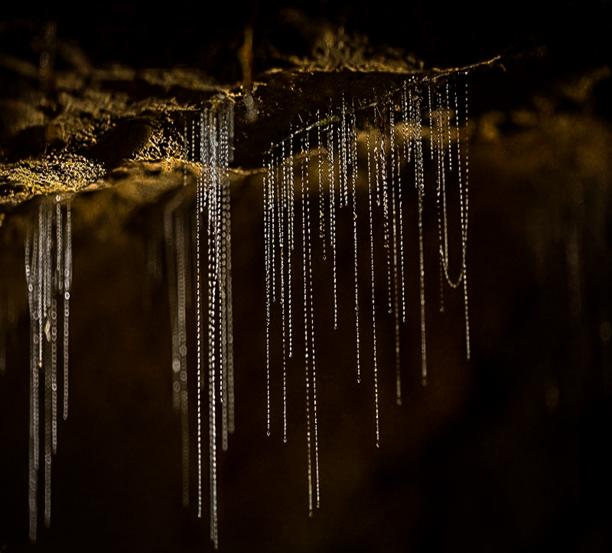 We moved in total silence through the cave, out boat breaking the patches of light dancing in the water. The glowworms were all that you wished the night sky would be: eminently close, razor-sharp pinpricks of solid light, clouds of galaxy clusters so near you could touch them.

Fiordland National Park is home to what many consider New Zealand’s most stunning natural attraction – the breathtaking Milford Sound, also known as the eighth wonder of the world. Read the story . . .

Te Anau to Milford Sound Piopiotahi Highway: the journey into the heart of Fiordland.

If you want to take in Fiordland’s wilderness, vastness and beauty without being drenched in that seemingly perpetual rain, take the Piopiotahi Highway. Read the story . . .

South Westland: a wonder of the world

The bottom left-hand corner of our little country, South Westland, is a world-renowned UNESCO World Heritage area. Read the story . . .