Top attractions in Hamilton and Waikato

The region offers something for just about everyone – from Hamilton City's urban attractions to the stunning black sand surf beaches of Raglan, and the rolling hills and bush-clad mountains that shape the landscape.

Get up close to the animals at Hamilton Zoo or let the kids explore the themed Hamilton Gardens – from traditional Maori to Japanese Contemplation, American Modernist and Italian Renaissance. (Hot Tip: Pick up a Children’s Discovery Trail Map from the visitor centre.) For native wildlife, explore Sanctuary Mountain Maungatautari, Otorohanga Kiwi House and Native Bird Park, or experience the magic of glowworms in Waitomo.

Giraffes magnificent in the savannah. #hamiltonzoo

Waikato is home to numerous cycling and walking tracks or, for the less energetic, relax with a picnic at Hamilton Lake while the kids let off some steam at the playground. If the weather's not looking too flash, visit the Waikato Museum which has interactive exhibitions designed specifically for children. Bowl and Social at SKYCITY Hamilton is also great for a rainy day, with tenpin bowling and TimeZone games. At Waitomo there are walking tours suitable for all ages and the ‘Trollcave’ tour, in particular, is great for families with kids. 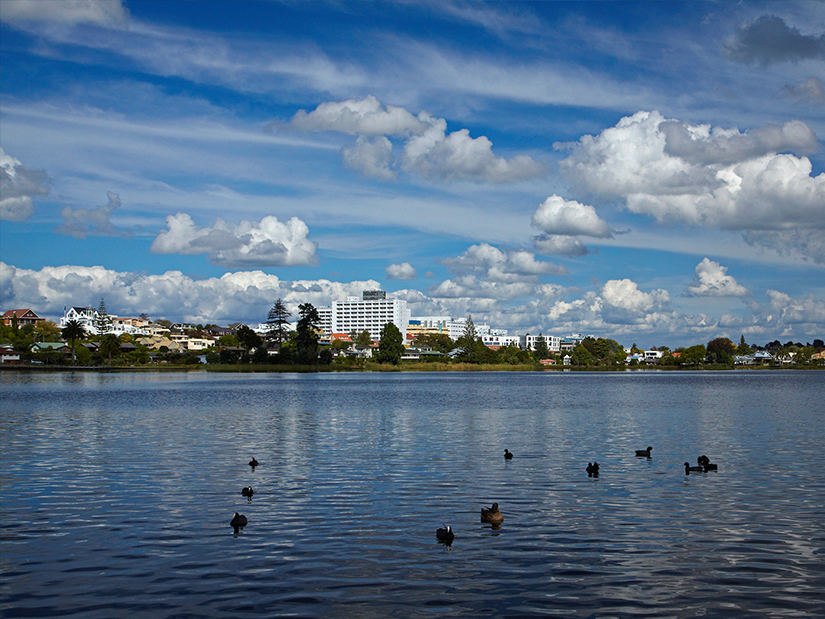 Millions of years in the making, Waitomo Caves is an underground playground like no other. Explore short walks above ground or fuel up in the cafe before heading down below to see the magnificent limestone formations. In the world-famous Waitomo Glowworms Caves, you can finish your tour with a boat ride under thousands of twinkling glowworms, while companies like Waitomo Adventures and The Legendary Black Water Rafting Co and others can take you abseiling, black water rafting, zip lining and climbing through the cave systems. 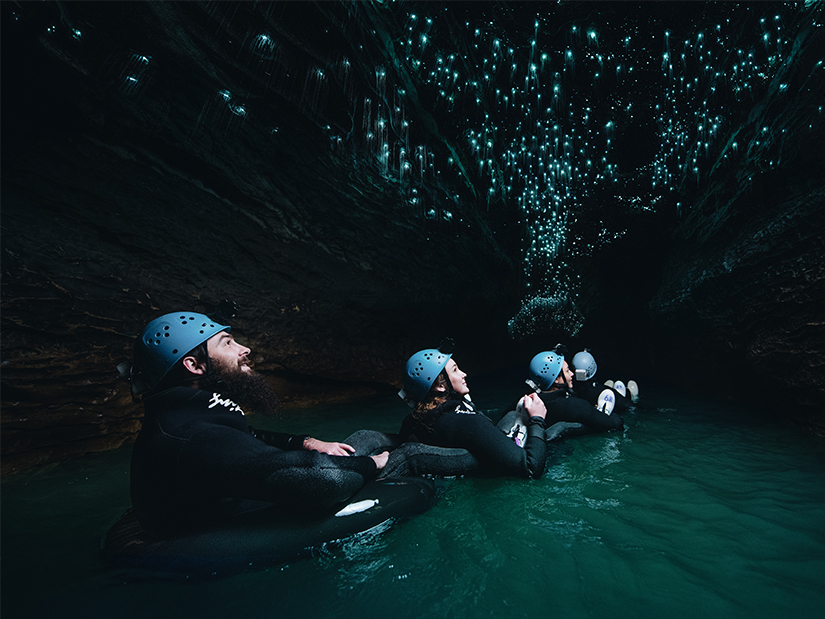 Glowworms in the Waitomo Caves © The Legendary Blackwater Rafting Co.

Peter Jackson thought that the Hamilton and Waikato region would make for a perfect Shire when he was scouting locations for his adaptation of the JRR Tolkien classics. Quietly hidden behind rolling green hills on a sheep farm near Matamata, Hobbiton Movie Set Tours will take you behind the scenes of the iconic films. Duck into a Hobbit hole, or take a selfie at The Green Dragon Inn. Further south, visit the spectacular limestone cliffs and native forest at Mangaotaki Valley, where scenes from The Hobbit: An Unexpected Journey were filmed. 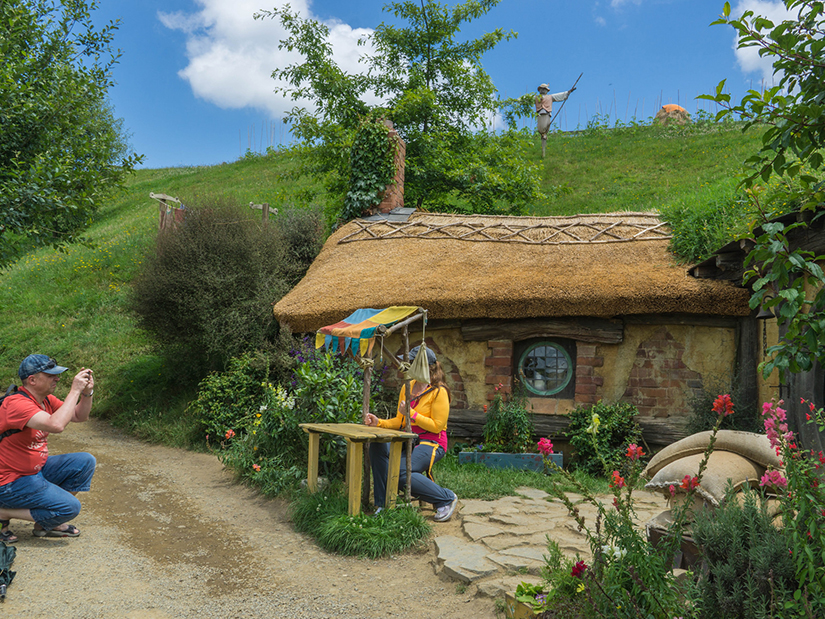 Waitomo’s underground wonders are a great reason to visit, but there is also plenty to experience above ground. From go-karting at Hampton Downs to canyoning with Raglan Rock, or an evening glowworm kayak on Lake Karapiro with Lake District Adventures – there is something for all adventurers. For some two-wheel fun, check out the Waikato River Trails, Timber Trail, Hauraki Rail Trail and Te Awa River Ride for a variety of great cycling options.

Book Online for our GoKarts tomorrow and get a session for only $39!! Link in our bio

From award-winning restaurants, cafés and bakeries to artisan producers, the Hamilton and Waikato region offers plenty of options to whet your appetite.

As you might expect in a region famous for its dairy farming, local cheesemakers have established themselves as leaders in New Zealand, and artisan ice cream producers are creating imaginative flavour combinations.

Escape from the city for high tea in the sunshine and country views. #zealong #hightea #yolo : @qiwendy

Enjoy a high tea at New Zealand’s only tea plantation, Zealong Tea Estate just north of Hamilton, or take a tour of Good George Brewery where you can learn about their award-winning beers. SKYCITY Hamilton’s dining precinct has options from gourmet burgers to Spanish tapas, while a plethora of cafés and restaurants throughout the region mean you'll never want for a good bite to eat.

Boutique accommodation, natural mineral spas, gourmet eateries and numerous golf courses all make the Hamilton and Waikato region perfect for an indulgent break. Rural settings have secluded country retreats, while Hamilton City has many fine dining restaurants, shopping options and a vibrant arts scene for a relaxing break with an urban twist.

From Port Waikato in the north to Lake Arapuni in the south and the rivers and lakes in between, the Hamilton and Waikato region provides many options to get out on the water. The mighty Waikato River – New Zealand's longest – has great kayaking, cruising and boating, and Lake Karapiro is most well known as the home of Rowing New Zealand. For indoor options, there are many heated pools, hydro slides, and mineral spas throughout the region.

At the coastal town of Raglan you can kayak or paddleboard around the harbour with Raglan Kayaks, or catch some waves with the Raglan Surfing School. There's also rock climbing or canyoning or, come low tide, try digging your own natural hot pool at Kawhia’s Ocean Beach, just south of Raglan. 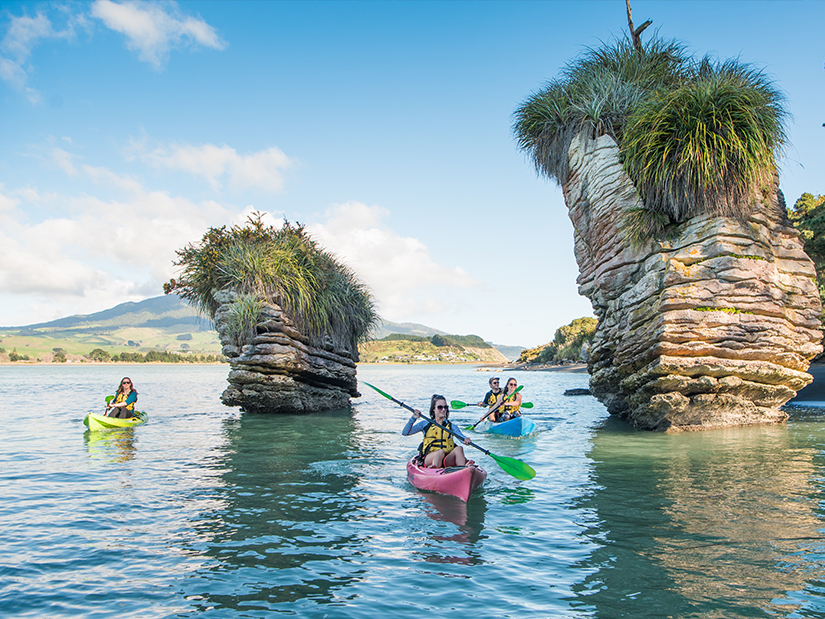 Pamper yourself in a boutique lodge with a Shire-like view, get back to nature in an eco-dwelling or enjoy a family break in a beachside holiday park. Inner city hotels like Novotel and Ibis Tainui Hamilton, Distinction Hamilton, Sudima Hamilton and Ventura Inn & Suites all offer great options, as do Hamilton's motels and serviced apartments.