Marlborough must have been an amazing place to visit in the last Ice Age, when a fair chunk of the Southern Ocean was locked up in the Antarctic icebox.

Marlborough was a region of high peaks divided by swooping plunges to river valleys – probably not unlike parts of Fiordland today. But then the earth warmed, the ice melted, the sea rose and it all went west.

On the bright side, however, the inundation of the great river valleys of ancient Marlborough produced the internationally famous Sounds. We had not so much lost a bunch of rivers as gained one of the prettiest waterways in the world. It must have been an amazing place to visit a few million years ago, but I’ll bet it wasn’t a patch on what it is today.

You’d be forgiven for thinking James Cook had a bit of a thing for George III’s wife, Queen Charlotte because he named a number of bits of the world after her. The Queen never knew what an honour Cook did her when he named one of the Marlborough Sounds after her.

He knew a pretty waterway when he saw one, and Queen Charlotte Sound, with its mirror-calm channels, its maze of deep coves and secluded bays with songbird-haunted forest right down to the water’s edge, was doubtless one of the prettiest he visited, because it is still stunning today.

Ship Cove, like many of the prime spots in and around Queen Charlotte and neighbouring Kenepuru Sound, is inaccessible by road. Fortunately, there are alternatives in the form of water taxis or charter boats. 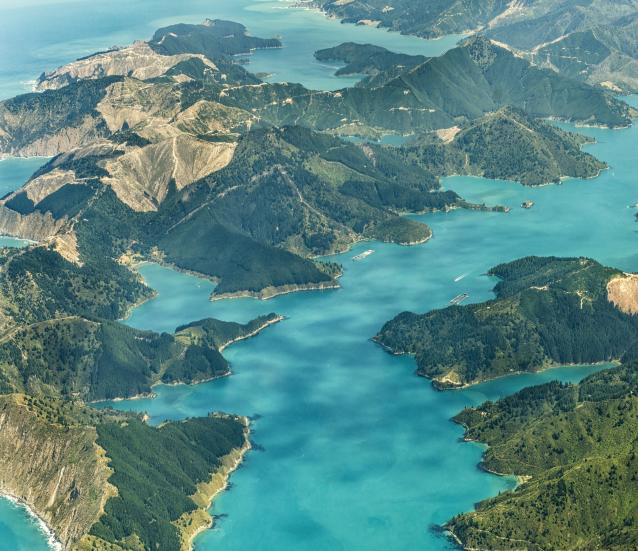 Aerial photograph of the fjords near Queen Charlotte Sound. © Westend61

The hub of the Sounds is Picton, the South Island terminal of the Interislander ferry service and point of departure for any number of sightseeing and nature-watching tours.

Nearby, the little town of Havelock, known as the gateway to Kenepuru and Pelorus Sounds, is also the centre of the local aquaculture industry, which specialises in green-lipped mussels. They go down a treat with a glass of Marlborough sauvignon blanc.

With nearly 800ha in grapes, Marlborough is New Zealand’s largest wine-growing region and the list of local labels often features at the honours table of international wine festivals. Read the story . . .

The Queen Charlotte differs from others in the network of New Zealand’s Great Walks, in that the accommodation is in a whole other class to traditional bush-bashing experiences. Read the story . . .

Marlborough: From the vines to the sea

As the probable landing place of the first waka ever to visit New Zealand, Marlborough is the home of the very first people ever to travel to this country.   Read the story . . .

Cook Strait crossing: one of the most beautiful in the world

Anyone who has ever done a road trip of New Zealand will have indelible memories of their Cook Strait crossing. Read the story . . .