The charm of Lake Tekapo is self-evident. © Joshua Tagi / EyeEm

The great high tussock plains beyond the first range of mountains bordering the Canterbury region are collectively known as the Mackenzie Country or the Mackenzie Basin, after a stockman who drove 1000 head of sheep this way in 1855.

Trouble was, they weren’t James McKenzie’s sheep and nor did they belong to the man who engaged his droving services. He was convicted and jailed for being ‘in the company’ of 1000 sheep that didn’t belong to him.

McKenzie is commemorated not only in the name of the region (and even though the spelling differs from his) but also in the various legends that subsequently sprang up surrounding his rustling prowess and the supposedly supernatural powers of his strong-eyed dog, Friday.

McKenzie, Friday the dog and the other pioneers of the district are all commemorated by the Church of the Good Shepherd and the fine statue of a border collie on the shores of Lake Tekapō. In lieu of a stained glass window, the little stone church has a clear pane overlooking Tekapō and the Mackenzie Basin – ornament enough indeed. The church was opened in 1935 and has proved a focal point for visitors to this area ever since. 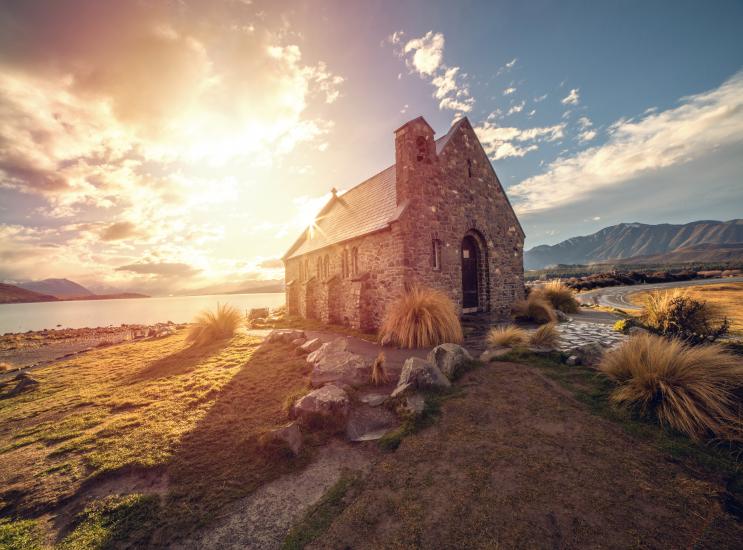 The Church of the Good Shepherd. © swissmediavision

The unsurpassed clarity of the air up here made it a natural choice for the location of the internationally renowned Mount John Observatory. There are a fair few stars in the night sky, and it seems the lot of them are on full display of a clear Mackenzie Country night. Educational tours of the observatory are available to the public, and staff run nightly star-gazing tours, where visitors can use telescopes, binoculars and the naked eye to find their way about the heavens.

How cool is this, hot pools and stargazing combined! Bliss! 📷= @tekapostargazing ✨

By day, the view’s still pretty spectacular. The arid splendour of the Mackenzie Country is laid out before you, limited to the west by the Main Divide and dominated, as are all central South Island vistas, by Aoraki Mount Cook.

The ice-fed waters of Tekapō and of nearby Pūkaki are cold and coloured intense blue – the colossal, heavy tread of glaciation grinds stone to fine dust and it is this ‘rock flour’, suspended in the water, that gives rise to its brilliant turquoise tint – and the surrounding russet, gold and umbers of the tussock is studded in season by the lupins that have colonised the southern high country.

Not bad. Not bad at all.

Loved by the locals: Mackenzie

Lording over the Mackenzie region, Aoraki Mount Cook has become a symbol for what could easily win the unofficial 'most beautiful region in New Zealand' competition. Read the story . . .

If you find yourself on the West Coast in a reflective mood, you’ll also find you’re in good company. Read the story . . .

The Church of the Good Shepherd: the most photographed church with the best views

Visit this iconic church set above the shoreline and stunning views of Lake Tekapō. Read the story . . .