Auckland is never static. It’s a teenager of a city – fully focused on growth, change and improvement.

This change and development is a huge positive, but also means it never feels ‘finished,’ so establishing a tangible sense of the city’s historical roots isn’t that straightforward.

Asking an Aucklander for tips on how to enjoy their city will inevitably lead you right to the outskirts: to vineyards, beaches and native bush walks. Or directly into the central city to the plethora of restaurants, cafés and bars that locals are rightly so proud of.

These are our defining features – a mix of cosmopolitan pleasures and natural, ‘untouched’ environments.

Traces of Tāmaki Makaurau pre-development that provide a background to our cultural identity, or of the industry, art and architecture that mark our colonial heritage, are not as easy to find and are only rarely put front and centre.

An exception is the annual Auckland Heritage Festival, which has been running across the region since 2011, and which champions the city’s fascinating past and tells us how we got where we are today.

Yet many of these experiences are available to explore year-round, and some of the best Auckland discoveries are found on the city fringe and the central suburbs.

An aspect of Auckland’s industrial development that immediately captures the imagination is the creation of an entirely new shoreline from the 1840s through to the early 1900s. In order to accommodate early settlement and the construction of new wharves and rail connections, headlands were excavated and land was reclaimed from Point Erin in Herne Bay through to St Georges Bay in Parnell. This marked the beginning of Auckland’s transition from colonial port to modern city.

Parnell is Auckland’s oldest suburb, and one of the most affluent in New Zealand. Standing at the Fred Ambler lookout on Gladstone Rd puts you on a clifftop that used to rise up from St Georges Bay and now looks out across the train lines to the ports, and across to the North Shore and Rangitoto Island.

The Helen Escobedo sculpture 'Signals' frames the dramatic cityscape to the north-west, and as the cliff curves round to the east, Dove Myer Robinson Park (named for Auckland longest serving Mayor) leads you down into Taurarua Judges Bay, a gorgeous piece of shoreline that has maintained its original contours.

Taurarua refers to the songs of Waiohua defenders, who were ultimately unsuccessful, though defiant, in the face of the Ngāti Whātua assault on their headland pā in the mid-17th century. The English name, Judges Bay, was named – very creatively – for two judges who had settled in the bay from 1841. Sir William Martin was the first Chief Justice of New Zealand, and William Swainson was the first British-appointed Attorney General.

Here, the Parnell Rose Gardens are alive with colour and scent. Not only from the 5,000 immaculate rose bushes themselves but also a plot of bush that includes the oldest mānuka and the largest pōhutukawa tree in Auckland. The best time of year to visit for full blooms is October through to April, and each year Auckland Council holds the Festival of Roses in November, with stalls and free local entertainment.

Judges Bay is now intersected by the train line, separating it from the harbour and creating a lagoon. There are pontoons to swim out to, and it’s a popular spot for stand-up paddle boarders. But perhaps better for swimming are the excellent salt-water pools just around the bay at the historic Parnell Baths.

Arguably the best public swimming pools in Auckland, Parnell Baths have been an institution since 1913.

The upgrade of the baths in 2002 thankfully included the restoration of the iconic mosaic mural, which was designed in 1957 by artist James Turkington with help from Tibor Donner, the senior architect for the city council.

Back up the hill, St Stephens Chapel is perched up above the bay with stunning views. The small colonial chapel was built in 1856 and walking amongst its surrounding graves will introduce you to a former PM, the first chief justice, remarkable pioneering women and the first Māori priest.

Bustling Parnell village is famous for cafes, restaurants, boutiques and art dealers, and also home to Holy Trinity Cathedral. The whole site is a must-see for art and architecture lovers, and guided tours can be booked for a small donation to the Anglican Diocese.

In the cathedral’s forecourt is one of Auckland’s most well-known and well-loved pieces of public art. The sculpture ‘Mountain Fountain’, designed by Terry Stringer, stood in Aotea Square in the city centre for nearly 30 years, and when the square was redeveloped in 2010 it found an ideal new home in Parnell.

The Cathedral itself is stunning – the foundation was laid in 1957 and it finally came into use in 1973. It replaced St Mary’s, which had been relocated from across St Stephen’s Rd, and now the two sit directly alongside each other. St Mary’s, built in 1888, could be seen as humble in the shadow of its larger neighbour, however, the building is regarded by many as the best example of wooden Gothic Revival architecture in the world.

Behind the Cathedral is Bishop Selwyn Chapel, a modern masterpiece designed by architects Fearon Hay that opened mid-2016. The chapel boasts a beautiful Italian gold-leaf ceiling, and with floor-to-ceiling glass walls enjoys views through historic oaks across to the iconic volcanic cone of Maungakiekie (One Tree Hill).

While Parnell is filled with treasures of Auckland’s history and is perfect for exploring on foot, there are central Auckland suburbs that, while not being far away in kilometres, are a world away in terms of prestige. Yet many of these less illustrious addresses are now also getting the historical restoration and recognition they deserve.

One of the newest and most fun places to get out and explore without leaving the city is Waterview, with its wonderful new ‘shared path’, a historical excavation, a restored waterway and a truly delightful playground for kids and adults alike.

Waterview, located in Auckland’s inner-west, is a small suburb whose residents had previously needed to head to neighbouring Avondale or Point Chevalier for community facilities. The area has certainly never been on the map for Aucklanders as a ‘must visit.’ But this low-key suburb has had some secrets hidden away.

The Waterview Reserve has been completely transformed as part of the SH20 Waterview Connection motorway project, which began in 2011. The Waterview Tunnel is a huge piece of motorway infrastructure connecting Manukau to the city and the north-west, which opened in October 2017. While much attention was on the build of this tunnel and overpasses, work was also being carried out at a community level to take advantage of a great opportunity.

As Auckland’s growth intensifies, the protection of green space, waterways and heritage features comes into focus, and the result in Waterview is a wonderful example of this protection. The reserve has become a community park with water features in the playground where kids can cool off, a basketball court, skate ramps, playground, and even a sandy beach volleyball court. You could bring a picnic and happily spend the day here. 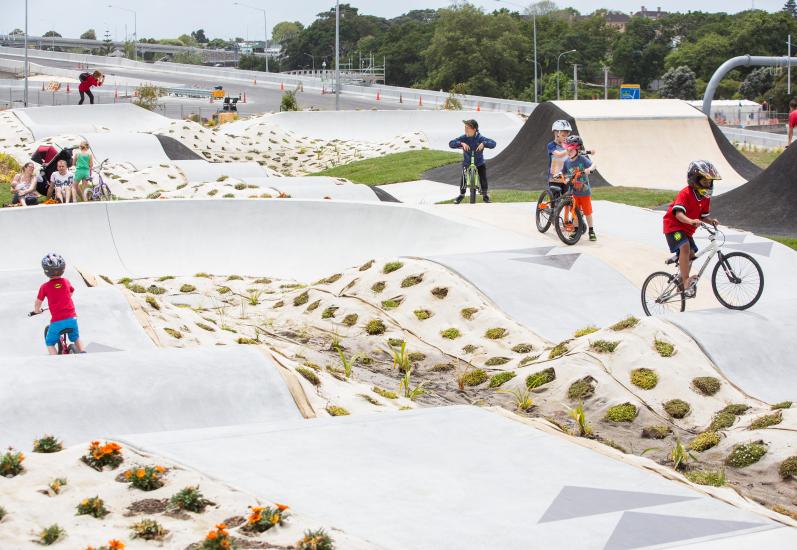 You can drive to the park, of course, but to get the most out of the experience – and to have the most fun – cycling is the way to go. The incredible Waterview shared path connects to the central city, the north-west, and to neighbouring suburbs all the way to Onehunga in the south. Leaving the reserve via the cycle path with the busy motorway passing overhead, you’ll come across a neatly restored and displayed ‘Heritage Area’ alongside Oakley Creek.

It delves into the rich history of the area, which once housed a bustling village, brickyard, tannery, flax mill and flour mill. The reserve is on the site of the old quarry and which mill once used the stream waters to drive a waterwheel, and is now listed as a Category 1 Historic Place.

The creek has inspired a local community group, ‘Friends of Oakley Creek’, to restore it to a more natural state and improve the water quality. Also known as Te Auaunga Awa, it is the longest urban creek in Auckland, stretching 15km as it flows from the northeastern slopes of the Hillsborough ridge through a series of open parks and reserves, and north into the Waitematā Harbour. Pre-European settlement, the awa was a vibrant ecosystem encompassing wetlands, swamps and plentiful vegetation.

Leaving Waterview by bike or on foot takes you across the motorway to the Unitec campus, via the fabulous ‘Rainbow Path’, and follows the route of the stream. One of urban Auckland’s best-kept secrets is down in the valley not far from here – the Oakley Creek Waterfall. On hot days you’ll find people swimming in this peaceful bush setting, jumping from the 6m-high falls, and you’d swear you were more than 15 minutes from the central city.

Whether experiencing Auckland’s past through beautifully executed modern amenities or navigating well-preserved historic neighbourhoods, exploring this adolescent city does not have to take you to the outskirts. There’s fun to be had in the central suburbs, and the city’s roots are waiting there to be discovered.

What's the weather doing in Auckland? 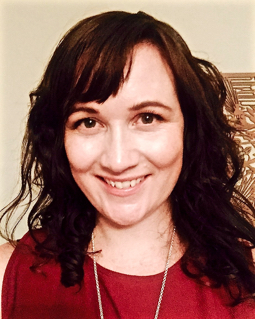 Sara Cairney is an Auckland-based publicist who loves to travel – whether it's around the world or exploring the rapidly-changing city she calls home. She thrives on a good challenge, having worked in industries ranging from local government to music, architecture, transport and television. Sara enjoys eating out and trying new food but she doesn’t really ‘get’ craft beer. They all taste the same. Other than travel, her main loves are her big family, live music, and other people’s dogs.

Queen Street is considered Auckland’s main street, the axis on which the city spins. Read the story . . .

Our children will take completely different memories of the Auckland War Memorial Museum into their futures than the majority of us have borne from our past. Read the story . . .

What's the weather doing in Auckland?

Sara Cairney is an Auckland-based publicist who loves to travel – whether it's around the world or exploring the rapidly-changing city she calls home. She thrives on a good challenge, having worked in industries ranging from local government to music, architecture, transport and television. Sara enjoys eating out and trying new food but she doesn’t really ‘get’ craft beer. They all taste the same. Other than travel, her main loves are her big family, live music, and other people’s dogs.