In the 1950s, JC Reid wrote of Auckland: 'Its people work hard and play hard. It is the most cosmopolitan of New Zealand cities in both composition and outlook. Modern Auckland is a perky gold-digger, over-talkative but full of ideas, mildly interested in the arts and much in love with life. She’s very good company.'

And while no one really wants to be thought of as a gold-digger, perky or not, with the way Auckland property prices have soared in recent years, you could say that today she’s more of a gold mine.

Superficial considerations aside, this grand city has myriad other elements and she goes by a few other names as well. Some call her the Queen City after the main street that carves a line from Karangahape Road down to the water; others prefer the City of Sails, a nod to the high proportion of boat ownership per capita, but surely the Māori moniker is the most romantic. 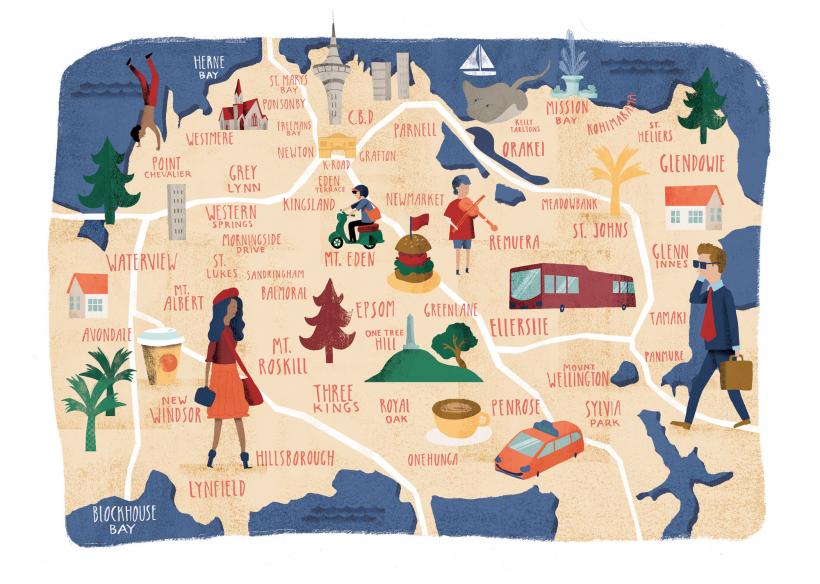 Tāmaki Makaurau translates as ‘The Isthmus of One Thousand Lovers’ and refers to the legend of the Patupaiarehe. These mythical fairy people roamed the land well before humans and it’s said their nocturnal mischief led to the eruptions that created the volcanic field. Geologists may, of course, beg to differ but it makes for a charming story.

Aside from having many names, Auckland is also New Zealand’s most populous city by a country mile, home to almost 1.5 million people, close to 33 percent of the entire population.

This diverse and buzzing supercity regularly places in most liveable-city lists published across the globe and it's not hard to justify the nomination.

From the waters of the Waitematā Harbour to the revitalising black-sand West Coast beaches, Auckland’s landscape is dominated by 48 volcanic cones. Over the centuries, the land has burst open with explosions that shaped the impressive topography we see today.

Whether you’re visiting the award-winning Auckland Zoo to take a gander at local and exotic fauna, or you’re down below ground at Kelly Tarlton’s Sea Life Aquarium enjoying close-up encounters with sharks, stingrays, seahorses and penguins, for a big city (by New Zealand standards) there’s a whole lot of nature to enjoy.

Further flung but not far off the mainland, whales and dolphins regularly visit Auckland’s waters, with tour operators taking visitors on half-day excursions in the Hauraki Gulf. One company is so confident you’ll spot these magnificent mammals in their natural habitat, if you don’t see a whale or dolphin on the day you go, you can hop on a boat the next day for free.

For landlubbers, there are plenty of city beaches to relish, from Mission Bay to Herne Bay, Cheltenham to Point Chev, it’s easy to enjoy a quick taste of seaside life without going far out of your way.

Shopping might not be everybody’s bag but for many out-of-towners, coming to the Big Smoke means being able to take advantage of retail outlets found nowhere else in the country.

International fashion juggernauts like H&M and Zara caused a great deal of excitement when they opened their flagship stores here. For more bespoke threads, Ponsonby Road is perfect for a day of browsing, selling every kind of apparel, from high-end to hipster, first class to second hand. You want shoes, accessories, lingerie, cosmetics, homeware, books? This groovy boulevard is where you’ll find everything you never knew you needed. And because it’s a well-known fact that shopping can whet the appetite or create an equally powerful thirst, there’s an exceptional smorgasbord of cafes, restaurants and bars dotted along this hip strip.

Riding the ferry to Devonport is another appealing day trip. Proud of its quaint village feel, this Victorian settlement is home to art galleries, boutiques, a vintage cinema, eateries, a safe swimming beach and a playground. If you’re not in a hurry, make an hour or two for the Torpedo Bay Navy Museum or climb up Mount Victoria for an exploration of the old military relics of North Head.

Sports fans are also well served in Auckland. Time your visit right and catch a game of world-class netball at Vector Arena where the Silver Ferns regularly demolish their opponents. Or cheer the All Blacks as they show off their legendary talents on the hallowed grounds of Eden Park. Horse racing is another heady spectator sport with a handful of racecourses offering full calendars, notably during the warmer months. Be sure to pack a fascinator and your most fabulous dress (or suit) because Fashion in the Field is hotly contested among the hoi polloi. Tennis and polo are also big-ticket events, attracting increasingly impressive international competitors.

Auckland. Gently scorned by Kiwis living beyond her boundaries, but make the effort and you’ll find her vibrant and endearing, full of surprises and very good company indeed.

Travelling far and wide across New Zealand and around the world, Auckland-based Elisabeth Easther has turned her curiosity and wanderlust into a full-time job, writing about travel, the arts, culture and food. www.writestuff.nz

Show me more by Elisabeth Easther

Check out more of Auckland...

Our children will take completely different memories of the Auckland War Memorial Museum into their futures than the majority of us have borne from our past. Read the story . . .

Opening in 1997, the Sky Tower was, at 326 metres, the tallest building in the southern hemisphere. It’s still the twelfth tallest tower in the world. Read the story . . .

Travelling far and wide across New Zealand and around the world, Auckland-based Elisabeth Easther has turned her curiosity and wanderlust into a full-time job, writing about travel, the arts, culture and food. www.writestuff.nz

Show me more by Elisabeth Easther

Check out more of Auckland...