A Licence to Thrive

Dylan Thomsen profiles an initiative to get young drivers safely on the road.

For many young people, getting a restricted licence means they can start driving themselves to school or sport or maybe to a part-time job. For Manjit Singh, it means she can drive her baby daughter around.

“My daughter’s my motivation,” says the 18-year-old. Manjit gained her learner’s licence at the start of the year but, as a solo mum with no one able to take her out for supervised practice, it was extremely difficult to get the driving experience she needed to get her restricted licence.

The more challenging restricted licence test that came in last year means drivers have to reach a much higher standard before they are allowed to drive on their own, which is crucial to improving our road safety. The sad truth is that New Zealand has the worst rates of road crashes and deaths for young people of any developed country; road crashes are the leading cause of death for 15-24-year-olds.

At the same time there are young people out there who, because of their family situation, finances or where they live, have some real barriers to getting a licence. Sometimes young people who struggle to get a licence start a savage cycle of getting a ticket for breaking the rules, then drive again, get ticketed again and rack up fines they can’t pay.

In response, the AA, NZ Transport Agency (NZTA), Caltex and community groups have been trialling solutions. Manjit Singh is one of 37 young people who have taken part in two pilot programmes. In Porirua, 15 young drivers were partnered with 15 experienced driver mentors to supervise them for 30 hours of driving practice. NZTA provided a Hyundai i30 for the practice sessions, the AA gave each learner three free lessons with a professional instructor, and Caltex supplied the fuel used over the course of the programme.

A different approach was trialled in the rural King Country town of Te Kuiti, where 22 young drivers were each given up to 20 lessons with an AA driving instructor.

Out of the 37 young drivers on the two programmes, 16 had gained their restricted licence at the time of writing.  And the benefits extend beyond those successes. The first two drivers to get their restricted licence from the Te Kuiti pilot soon got jobs they wouldn’t otherwise have been able to get. Te Kuiti, like most rural towns in New Zealand, has few transport options apart from driving; having a licence is “crucial,” says the coordinator of that pilot, Desiree McKenzie. 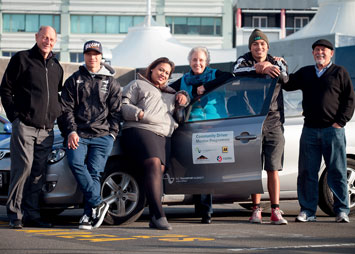 “And it’s not just driving lessons that the instructors have given the kids,” she says. “They spent a lot of time with them giving them motivation, mentoring, talking about safety, and what they can do with their lives as well.

“You can really tell the difference in the students. When they first came in, their heads were down, they were lacking self-belief. By the end of it, they were full of confidence and self-worth.”

“The instructors actually feel lucky to have had the opportunity to be involved. They are so proud of the young people and they had tears in their eyes when they were telling me some of their stories.”

Porirua mentor Denys Latham simply said that out of all the volunteer work he has been involved with in his life, this is the most fulfilling thing he’s ever done. Caltex Public Affairs Manager Jeremy Clarke says the company is also proud to be involved in the programme.

“I remember sitting in the first meeting between the drivers and mentors and seeing a few bewildered looks about what lay ahead, but to be here now and see the success and smiles on everyone’s faces is fantastic.

“We understand the importance of being involved in the communities we operate in and, if we assist some young people in becoming safer drivers, it benefits everyone.”

That’s the big picture, but it’s in talking to each young driver and their instructors or mentors that it really hits home how much the programme has meant to them. Wendy Betteridge started off as a mentor for Manjit, but finished up a friend.

“When I met her on the day she got her licence she cried because she was so excited,” says Wendy. “The funniest thing is driving with her now and she will see other drivers on the road and say ‘Why didn’t they indicate?’ or ‘What a bad driver!’”

For Manjit herself, it’s as simple as this: “I’m just looking forward to being able to drive my daughter around”.

Porirua and Te Kuiti have already begun working with their next groups of young drivers, and programmes are being prepared for launch in Northland, South Auckland, the East Coast and Christchurch.

Reported by Dylan Thomsen for our AA Directions Spring 2020 issue

What should you look for in an income protection policy?

A new safety campaign illustrates that safer vehicles don’t need to be expensive.

Tips for buying a used car

How to get the best deal.