Is it their sleek fins, their chrome or their sheer size that hook people into ‘going American’? Ben Johnson of Waikuku has no idea how he first became obsessed with American cruisers and muscle cars but, at last count, his backyard holds around a dozen, ranging from Chevrolets of various makes and models to a 1968 Dodge Charger, a Plymouth Barracuda and a Buick 1957 wagon.

An immaculate turquoise and white 1956 Chevy, which Ben purchased in 2003 from a seller in Adelaide, is parked on the drive. Before Ben worked his magic, this car had no engine and its paintwork and interior were very shabby. Now it drives like a dream and looks superb.

His workshop and garage space hold an ever-expanding collection of cars, as well as motoring signs, petrol pumps, car magazines, model cars and other memorabilia. 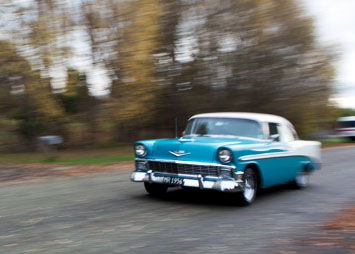 Getting it all under cover is a mission; Ben recently put up another roomy garage. His partner of 14 years, Lorraine Stevens, accepts a certain amount of overflow into the house, with shelves of die-cast model cars in the lounge.

Ben grew up in Kaiapoi, north of Christchurch, car mad from the start. He left school at 16 to take up an apprenticeship as a mechanic. A few years later, he’d saved up enough to buy his first 1938 Chevy.

“There was no engine in it. It was just a body. In retrospect, it was a bit too ambitious a project for me to take on then,” Ben recalls, adding that the car ended up being pulled to bits and stayed that way.

In 1998, he started working for himself, leasing a workshop out the back of the local BP service station. Four years later, he moved to bigger premises before finally selling the business last year. Now he’s busy with private repair contracts, working from his home workshop.

Throughout his time as a mechanic, his interest in collecting and restoring big old American cars has grown. His preference is for classic cars with potential, rather than ones that come buffed up as new.

“It’s more affordable to buy cars as ‘a project’ and you know what you’re getting. The risk in spending a lot of money on something nice and shiny is while it may look really good, it may turn out to have been patched up and poorly restored.”

Ben’s collection has grown from cars found in New Zealand – for example, a 1967 Camaro purchased from a man who had imported it from California – as well as in Australia and the United States.

Out the back of Las Vegas we came across 300 cars in the middle of nowhere. I was like a kid in a lolly shop.

On a trip to the US last year, he bought a 1955 Cadillac Coupe de Ville that he’d spotted at a swap meet in Pomona, California. “It didn’t sell there, so I ended up ringing the guy afterwards and driving out to his home in the desert, an hour out of Los Angeles. It’d just been parked up, derelict, for years. He showed us all the paperwork, I bought it and then he offered to tow it to the shipper’s yard for us.”

Ben had every intention of holding on to this car. “However, no sooner had I got it going than I sold it to a guy I’d been doing some work for. He’d fallen in love with it and had to have it. At least I know it has gone to a good home.”

Ben and Lorraine have made several trips to the US. Ben loves the vastness of the desert States, where the dry air helps to preserve the bodies of old cars. “You never know what you’ll find. I remember one time, out the back of Las Vegas, we came across 300 cars sitting out in a paddock in the middle of nowhere. They were all projects in varying states. I was like a kid in a lolly shop looking through that place.”

Through the classifieds site Craigslist, Ben also found an old collector of cars in Arizona who was selling his lifetime’s collection from out of a yard and warehouse in an industrial area. Fossicking through a treasure trove like that is what keeps Ben hooked on the idea of going back again.

“I love going to the old junkyards over there, too. They’re quite hard to find, but they often have such cool memorabilia.”

So much can be done by phone and online these days that it’s not necessary to travel to the US to buy a classic car from there. Ben says it does pay to be cautious, though, when buying from a private seller in another country. He suggests buyers seek detailed close-up photos of vehicles they’re interested in to make sure they’re in advertised condition. Ben also recommends having vehicles properly inspected before proceeding with any purchase.

There was no engine, it was just a body. In retrospect, it was too ambitious a project for me to take on back then.

“Don’t send large sums of money on the basis of one or two photos to someone you don’t know. You’re better to work through an international freight company.”

A shipper can pick up the vehicle, put it in a container and sort out all the paperwork. Buyers should also be prepared for hidden costs, such as cleaning and MAF charges, over and above freight fees.

When he’s not searching for new projects or working on the cars themselves, Ben likes to get behind the wheel, with Lorraine at his side. They love taking long Kiwi road trips. One of their favourite drives is to the annual Whangamata Beach Hop festival in the Coromandel... the only hitch being trying to decide which car to take when there are so many choices.

Reported by Kim Newth for our AA Directions Spring 2020 issue