With a bit of luck and a lot of work, an Auckland couple turn a house into a home.

They almost missed The One. On that particular weekend, feeling dejected in their hunt for an affordable home in Auckland, they almost didn’t bother.

Fortunately, Anna and her partner Mark, found the energy to visit yet another open home and, within a week, they had bought it.

“We saw it on a Saturday and it went to auction the following Thursday,” Anna says. “We didn’t think we’d get it, but we were told to go to the auction just for the experience... and we got it! There was only one other bloke going for it. It was very exciting.”

Anna and Mark hunted for their first home for a year and considered about a dozen properties quite seriously.

“It was hard, we both got tired of it – and it got a bit depressing, visiting awful old houses every weekend. And we had put an offer in on another house that we’d missed out on, so we were a bit over the whole thing.”

The couple knew which pockets of Auckland’s North Shore they could afford to buy in and concentrated the search on those areas. They wanted a home with at least two bedrooms and, as Mark is a builder by trade, they wanted something with potential, something they could add to.

“Because Mark is a builder he knew how much work would be needed to make a house OK and how much money we would need to spend... it was very good to have a builder on the team, so we knew we weren’t buying a dud!”

Anna describes the house they bought as a ‘bit of a shocker.’ 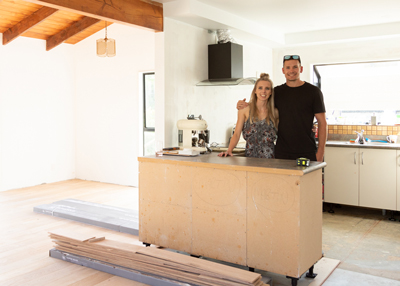 “It was built in the 1980s and hadn’t been updated. It was yuck and a bit daunting for me, but it has three big bedrooms, a huge deck and good views. And a garden! It ticks lots of boxes.

“Mark knew it needed a new roof and lots more besides, but nothing insurmountable.”

They moved in August, just as Auckland was going into the localised Covid-19 lockdown. First things first: they adopted a cat. Then they got to work.

Within six months they have made the house watertight, replaced the roof, repainted the exterior walls and renovated the deck. Inside, the walls of all but two rooms have been re-jibbed, plastered and painted. They’ve removed a wall in the kitchen, extending to fit a dishwasher; the rest of the kitchen fit-out is underway now. And they’ve taken out all the carpet and re-levelled the lounge and dining rooms before putting timber flooring down.

“The floors are oak hardwood and they look outstanding – really nice,” Anna says. “There’s just the bathroom and two bedrooms to go, now. Then the garden.”

Anna says that Mark has driven the project, treated it as he would a professional job with a deadline. She has been chief painter and wallpaper-stripper and has enjoyed learning other DIY skills.

Lots of mates have helped and Mark’s contacts for other trade services and supplies have come in handy – another perk of being in the trade. As they’re on a tight budget, they’ve had fun scoring recycled bits and pieces, too, including a cabinet, dining room chairs and a solid wood table.

Anna concedes they got lucky, finding a three-bedroom house in an area they liked, without crippling themselves financially.

“When we were looking for a house Mark kept saying that we had to think with our heads, not our hearts. But what we ended up with is actually both – what we’re doing with the house is about heart.

“I love it more and more. And I love owning a home, the package of it, of what you can do. You can have a pet, you can decorate and knock a wall out, put your own stamp on it. It’s liberating.”