A Hell of a Time

Karl Puschmann has a nosy around Russell, the reformed town of ill repute

It’s a nerve-wracking race against the clock. The best way to get to Russell is via the Opua car ferry, so we’ve driven onboard and are waiting for the attendant to get to our car so I can pay our fare. As the crew makes the final preparations she reaches us. I wind the window down, say hi and then… disaster.

My partner Hayley hears this and is gone on a mad dash to the dairy. The attendant moves on to the car in front of us, taps on their window and exchanges a bright yellow ticket for a handful of coins. How did everyone know to have cash?

It’s a close call, but Hayley makes it back just in time. The ferry toots twice and we’re off, heading out across the sea. Ten minutes later we dock at Russell.

We’re staying in a little complex consisting entirely of charming little cottages and situated only a couple of minutes’ walk from Russell’s township. We drop the bags and the car off and go have a nosy.

It doesn’t take long. Russell is quaint, rustic, sleepy and small. We walk around the town so quickly we go round again. Despite its stature, we learn that gastronomically speaking we’re going to be spoilt for choice. Cafés and funky looking eateries line the streets and we make a mental note to visit Hone’s Garden for delicious looking woodfire pizza.

I also notice a high proportion of beards, plaid and tattoos and realise that this small town can also boast a high percentage of hipster residents.

Well, why not? The appeal is obvious. The vibe’s chilled and relaxed. Today’s gorgeous. The sky brilliantly blue and not at all troubled by smudgy white clouds. The heat stays on the right side of bearable thanks to the cool breeze blowing in across the waters of Kororareka Bay. 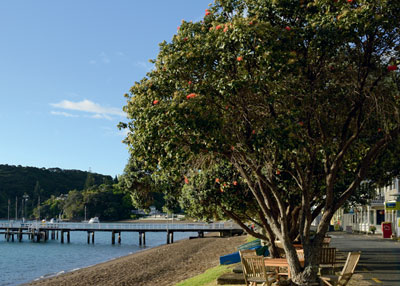 It wasn’t always this way. Russell is where European settlers first made themselves at home in New Zealand. They set up shop and the place soon degraded into a debauched sea port. We’re told it was labelled ‘the hell hole of the Pacific’ due to the rowdy sailors coming into town on shore leave. How times change. Today, in the heat of the sun, it’s heavenly.

Walking along the beachfront promenade is a real trip back in time. The pastel yellow, corrugated iron Four Square convenience store stands out amongst all the historic, wooden villa-style shops that line the street. We stop for coffee and nab a prime waterfront table. We watch fisherman muck about with their boat while a bunch of kids cool off doing bombs off the dock.

That afternoon we head to the golden sands and inviting ocean blue at nearby Tapeka Point Beach. It’s a hidden treasure for sure, surrounded by bright green hills that rise up and enclose the bay and simultaneously act as a terrific natural wind buffer. There are walking tracks that promise sensational views of Russell, but it’s hot and I’m lazy and content to just lie on my beach towel and explore the pages of the new Mojo magazine.

Later, it seems everybody has the same idea. With the sun falling on a pearler of a day, the entire sleepy seaside town of Russell has woken up and is lined up outside the Crusty Crab Fish n’ Chips shop.

Who can blame them? Fish n’ chips on the beach is one of the great Kiwi institutions and the beachfront that stretches alongside Russell’s promenade feels like it was designed solely for stuffing your gob with battered, deep fried goodness. Its gentle incline and grassy bank encourage you to laze back and enjoy the pretty views that shepherd your gaze out of the bay, past the bobbing berthed boats and across the harbour to Waitangi.

We get ticket 64 (two pieces of fish, one scoop of chips and a hot dog thanks) and get busy waiting.

Eventually our number’s called. We take our little newspaper-wrapped dinner and head back to The Strand to eke out a dining spot near the sand. We snatch a patch of grass and tuck in. Groups of families, friends and couples do likewise.

We sit munching our dinner as people’s chatter, laughter and joy fill the bay, and the sun sets on the really quite lovely hell hole of the Pacific.

Reported by Karl Puschmann for our AA Directions Spring 2020 issue