Mountain to the Sea

John Parker tackles the ups and downs of a cycling trail

If you’re going to do it, then do it properly.  That’s the basic motto of our geriatric ten-strong biking group – average age almost 70 – when we’ve tackled our NZ Cycle Trail rides round New Zealand. So we started day one of our 230-km Mountains to Sea two-wheel and jetboat adventure in the central North Island from the top of the Turoa Ski Road, 1700m above sea level.

A snow-capped Ruapehu soared above a coronet of cloud and there were views all the way to Mt Taranaki.

We arranged a ride up with Jayne from Ohakune’s Mountain Bike Station, rather than inviting a heart attack by doing it ourselves. Jayne and husband Darren, himself a keen mountain biker, run a thriving and caring business looking after biking groups in the area and making sure everything goes smoothly.

But we still had to do the riding.   Our mountain road descent was an exhilarating 17km swoop of a ride, but we respected at more sedate speeds the winding and undulating narrow pathways in the next section of the trail: the popular Old Coach Road. The section is around 15kms and three to four hours of cycling from Horopito to Ohakune that winds through forest with dramatic viaducts and railheads recalling the days when the steam engine was king.

Day two was some 50kms and four hours of mixed riding from Horopito to the remote Ruatiti Backpackers Lodge, on quiet shingle or tarmac roads. There were long descents – and equally long ascents. It’s biking truth number one: those who go down will sooner or later have to go up. 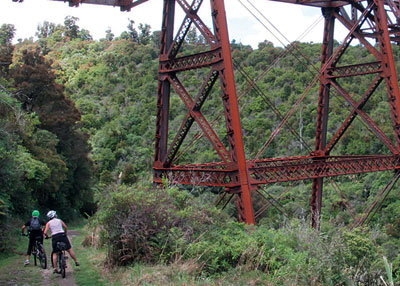 But the remoteness and scenery made it all worthwhile. And the lodge is an authentic, unadorned country experience. Dining is in a corrugated iron shed, working dogs are barking on nearby farms, and roosters crow at four in the morning. We slept well in the narrow bunkrooms  – and if some elderly bladders necessitated a night stroll, a star-studded sky undimmed by city lights was ample compensation.

Day three was the big one: some 40km along the Mangapurua Track to the Bridge to Nowhere, starting with
a 60-minute, four-kilometre grind uphill on a sandy surface to the trig point. One thought of England, one stuck the bike in the lowest cog, one kept the legs turning and one knocked the bastard off.

From the top it was mostly downhill, riding along stimulating and varied terrain: pasture curving through abandoned farmland, rutted and bouncy paths, small fords, and single-file tracks bisecting some vertiginous bluffs where walking the bike across was the only safe option. And 33 swing bridges.

It proved a wise investment to hire Darren as guide and mother hen for the day. He pointed out all the best spots for views, including one vista of Ngauruhoe and Tongariro in one direction and Mt Taranaki in the other, and showed us many a poignant remnant of settlements where farmers had tried, but failed, to wrest a living from this remote and tough country. And he was the man for emergency. One of us dislocated a finger when his bike scraped a wall on the side of a narrow track. 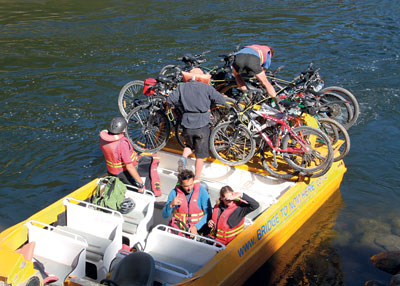 Darren and one of the three nurses in the party set it right and taped it up ready for more riding. And Darren leapt off his bike to rescue another who’d misjudged a path and catapulted onto a few branches fortuitously draped over a nasty precipice. It could have been much worse than a few scratches.

But we all got through, to take the previously booked jetboat to the comfortable Bridge to Nowhere Lodge. Thanks to a mix of relief and a sense of achievement the food and wine tasted delicious that night.

Another jetboat ride with our bikes and it was on the saddle again for some 90kms to Whanganui and the sea. En route we spent time wandering round the historic nunnery and church at Jerusalem, where iconic poet James K Baxter is buried. And we observed the sign for tired legs: “Why not rest and pray awhile?”

About halfway we greatly enjoyed a two-night stopover at must-experience accommodation, The Flying Fox. Access is by a cute two-person cable car winching us across the Whanganui River to an extraordinary complex, a beguiling mix of inventiveness, quirky architecture and Hundertwasser-like decoration set in spacious and restful grounds. And we were wined and dined to bursting point with wonderful meals.

The road from there to Whanganui needs care and vigilance for traffic where it narrows – and there’s the thigh-burner Gentle Annie hill to grind up. But from there on it’s easy, especially if you include a celebratory coffee and muffin break at the charming settlement of Upokongaro.

It’s a ride that keeps on giving: months later I’m still warmed by a sense of accomplishment.

Reported by John Parker for our AA Directions Spring 2021 issue