On skis and a wing

In the carpark of the Snow Farm, between Wanaka and Queenstown, I used to see them coming back – tired, cold and wind-burnt but buzzing with excitement and wide-eyed with wonder. The snow kiters!

On skis or snowboards, tethered to colourful kites, they would sail off into the arctic landscapes of Mt Pisa and return with tales of covering 50km of remote backcountry, and hectares of untracked snow.

But for me, the final jolt of inspiration came from the words of Noah Poritz, one of the sport's pioneers: “I realised I didn't need a lift ticket anymore.”

This was irresistible: a personal ski lift in my backpack, a wing to unfold and sail over pristine and otherwise inaccessible snow. And so, with the first snowfall and wind of the season, I found myself on the beginners' slopes of the Pisa Range, learning to ski again – only this time being pulled along by the power of a kite. 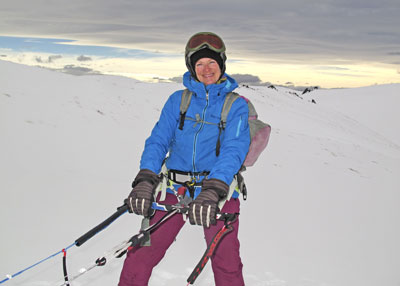 Central Otago's Block Mountains – flat-topped, high and desolate, covered in snow and exposed to the wind – are ideal kiting destinations. However, this does not make learning any easier.

A fellow kiting rookie put it this way: “It's like riding a dragon – awesome and exhilarating – but every so often you can get bitten.”

The greatest danger is, of course, being overpowered by your dragon and losing control over it, so it dives into the maximum power zone and drags you over the landscape. Any rookie could be put off by such an ordeal but on my first day out I was fortunate to meet Sue Bradley, also a kiting beginner, but well-versed in the ways of the wind.

A life-long windsurfing instructor and a skipper of ocean-going yachts, Sue wasn't about to be messed with by an unruly dragon in the wind. “I spent a good few days here with a small and forgiving trainer kite, feeling how it works and how it can pull me on skis,” she told me. “You get overpowered, you simply let go of the kite and it falls down and stops pulling you. Snow kiting can be learnt safely, you just have to respect the wind, and your own abilities and limits.”

We spent the following days plodding about in deep snow, untangling lines, launching and crashing our kites, being towed around the hill slowly and in control, only occasionally leaving a snow angel here and there – a sure sign of progress. On day six I covered nearly 30km, most of it upwind and uphill, and then managed to come back to base all by kite power, as elated as if I had just crossed Antarctica.

Still, beyond the basics, snow kiting is not as simple as hooking yourself to a kite and sailing away. It is a complex game with many variables. First you have the mountain wind, changeable in strength and directions. Then you have the kite, the aforementioned dragon chomping at the bit to run with that wind, and you dare not take your eyes off it, or your hands of its reins. There is the terrain, too: ridges where the wind is strongest and hollows where it dies completely making your kite fall out of the sky. And yes, there are plenty of downhills, usually just when you don’t want them. And did I mention other kiters and rules of traffic to pass each other safely?

Snow kiting is mentally intense, engaging both mind and the body so completely there is no time for anything else but being ‘in the zone’ which perhaps explains why the sport is almost addictive and why it appeals to such a wide range of snow enthusiasts.

“Last week, I had an 80-year-old gentleman kiting with me, and he didn't let his age stop him,” Richard Prout, one of the sport's most active exponents, told me. “My 13-year-old daughter Emily flies all over the Pisa Range, even in a gale. A decade ago, they could not be doing it. Kiting just wasn't safe enough back then.”

Even a casual look around the hill reveals that almost everyone flies kites made by Ozone, a Raglan-based company which, though small in size, has managed to dominate the global kiting scene.

“Ozone's safety innovations have revolutionised the sport and made it widely accessible. It's no longer just the domain of super-athletes,” Richard said.

For one, I am grateful for this inclusion. Recently I was on the edge of Pisa backcountry, when an experienced snow kiter pulled over in a graceful turn, his behemoth sail eager but obedient like one of those mountain banshees in the Avatar movie. The wind and the snow were perfect; he didn’t linger but sailed off towards the summit.

I pulled on the reins of my kite, found the wind too, and followed the best I could, the snow whooshing under the skis and sparkling like diamonds. And briefly, I thought, this sailing on snow must be one of the most exhilarating things I've ever done.

Why not explore the region by foot or bike as well? Central Otago has an abundance of bike tracks offering spectacularly raw scenery including the Otago Central Rail Trail, the Roxburgh Gorge Trail and the Clutha Gold Trail. Walking tracks are plentiful in Alexandra, Clyde, Cromwell, Bannockburn and Roxburgh and offer historical insights.

Reported by Derek Grzelewski for our AA Directions Winter 2018 issue