Auckland is known as the City of Sails but could one day earn the nickname 'City of Trails'.

Thanks to some passionate advocates and a burst of investment, the city is becoming increasingly pleasurable for pedalling.

Dedicated cycle paths are popping up at every point of the compass, and people are discovering that going by bike not only helps avoid congestion, but allows a better appreciation of the city’s charms.

Setting off early one sunny morning, I intended to follow my nose, although I had a swag of maps in my backpack, in case. Starting in Pt Chevalier, my route into town was mainly on road, up to Herne Bay via Cox’s Bay.

The cafés of Jervois Rd were open for business, but I needed a few more kilometres under my belt before taking a break. So I wound my way down to Curran St and the waterfront, past the hopeful fishermen beneath the Auckland Harbour Bridge – a quick fantasy about how amazing riding on the SkyPath will be – before clattering onto the Westhaven Promenade, a freshly minted series of boardwalks built for pedestrians and cyclists.

At several points it extends over the water, with public art dotted about, and at night it’s beautifully lit. Out to my left there sprouted a forest of masts swaying at anchor; to my right, the motorway rumbled on. 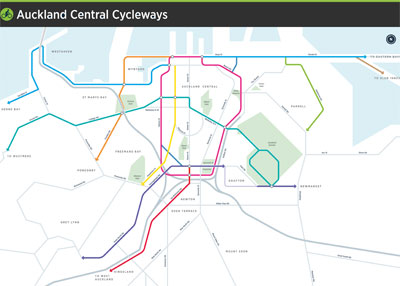 On to Wynyard Quarter, wonderfully deserted on a weekday morning, the giant concrete silos loomed over the playground. On the water, Auckland Seaplanes’ de Havilland Beaver waited patiently for her first flight of the day. Approaching the drawbridge that connects Wynyard Quarter to the Viaduct, it sounded its intention to open, forcing a handful of stylish women on their way to Fashion Week to pause in their high-speed, high-heeled haste.

I could have headed straight along the new protected path on Quay St towards Tamaki Dr, but I had the ‘pink path’ and parts further west in my sights.

My safe cycling spell was briefly broken and I was forced to join the traffic until halfway up Nelson St where I found a dual carriageway, just for bikes. How fabulous life would be, I thought, if these passageways were the rule and not the exception.

I steamed past construction zones, traffic jams, gaping holes where buildings used to stand; you notice so much more when on two wheels.

To the Lightpath – Te Ara i Whiti. This wonderful new curve of cycle splendor, a former motorway off-ramp, may have faded a tad from its original fluorescent glory since opening last December, but it’s still a magical delight until it spits you out near Upper Queen St.

Back on the road, it was briefly a wild ride, dodging cars and buses before I located Newton Gully and was reunited with the cycle path that runs alongside the Northwestern Motorway.

Leaving the city behind me, I whizzed west, crossing at the lights near MOTAT, skirting Chamberlain Park Golf Course, before heading through Unitec where I made a quick stop at the bike fixing facility. This oasis includes a pump – to give your arms a workout and your legs a rest – and a 'Swiss army knife' of essential cycle tools.

Skirting the growing tangle of towering roads that form the new Waterview interchange, I rolled across the causeway.

The bike path is completed, well ahead of the adjacent motorway works, and I delighted in a smooth ride, wide and flat, with zesty yellow bridges.

Arriving at Te Atatu in good time, I took a detour through this pretty peninsula for some spectacular views across to the city. The green acres of the pony club hint at this suburb’s rural roots, with scenic wetlands icing the cake. I explored a little around the water’s edge, striking the occasional dead end, but getting lost is part of the fun, and I earned myself a hearty brunch on Te Atatu Rd.

Well fed, I returned to the Northwestern Cycleway. I hollered for echoes as I rode through the gorgeously decorated Te Atatu underpass tunnel, built especially for cyclists and pedestrians.

About 500m further along, the turnoff to the Twin Streams Path appears, which takes you first along the Opanuku Stream. What a revelation, with its twists and turns, charming nooks and crannies, and cute little bridges to cross or roll beneath. 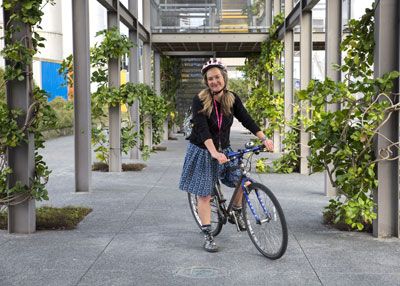 I arrived at Tui Glen, a gem of a place with historic holiday chalets and a playground that would blow the minds of younger riders, and wondered why I’d never been here before.

After that, the trail peters out and part two isn’t well signposted. I reached for my maps, and worked my way from Henderson’s The Falls restaurant to the Corban Arts Estate car park, but you do need to have your wits about you.

After about 15 minutes of confusion, I’d rejoined the streamside path and its charms, and cycled in the direction of Oratia. This is the most surprising burst of countryside, cheek by jowl with urban sprawl. If I’d been riding on a Saturday, I could have refueled at the famous Oratia Farmers’ Markets.

It’s true, cycling in Auckland isn’t all plain sailing yet, but there are plenty of superb cycleways to explore and, perhaps one day, when the various sections all link up, Auckland will become the City of Trails we dream of.

Te Ara I Whiti/Lightpath, in the heart of Auckland, is a shared walking and cycling path.

It runs from Canada St to the Union/Nelson St intersection via a bridge and the disused Nelson St off-ramp and is part of the Nelson St Cycleway which continues down Nelson St to the waterfront.

Phenomenally popular, the bright pink path has had more than 142,000 people cycle or walk it since it opened in December last year.

Along with a host of other national and international awards, the path won the Supreme Award at the Bike to the Future Awards in July, sponsored by the NZ Transport Agency and Cycle Action Network.

One of the judges of that award was the AA General Manager, Motoring Affairs, Mike Noon. He, and co-judge Richard Leggat, Chair of the NZ Cycle trail, said: “This is a project of scale, vision, spectacular design and colourful creativity that challenges the convention that infrastructure must be boring.”

They described it as outstanding, inspiring and innovative. “In only a short time Te Ara I Whiti/Lightpath has become a celebrated, iconic Auckland feature. It transcends walking and cycling for multi-use – even for wedding photos and magazine cover shoots!”

Reported by Elisabeth Easther for our Summer 2016 issue