Creeping stealthily through the undergrowth on a dark and stormy night, red light torches clutched in clammy palms, it’s hard not to giggle. The melancholic call of a ruru floats through the night, but our small band of strangers remains soundless.

No, we’re not hunting for truffles or scoping out nocturnal laser tag targets, we are scouring the native bush for something far more elusive. And with Vanessa Wards at the helm, we couldn’t be in better hands. 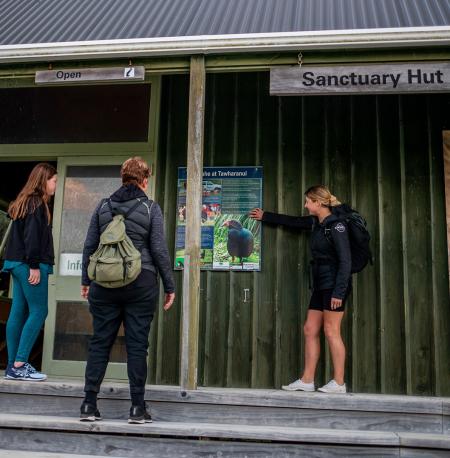 Ness is a nature-lover, self-confessed patriot and owner/operator of Kiwiness Tours, a boutique Matakana Coast tour company that gives new meaning to the word ‘local.’ Raised quite literally in the Tāwharanui Regional Park, Ness offers everything from vineyard and craft beer tours to local foodie forays and personalised adventures. But her three-hour nocturnal kiwi walks in the Tāwharanui Open Sanctuary are the real gems.

“Most people haven’t seen a kiwi in the wild and it’s quite a thrill to get up close to them in their natural habitat,” says the 34-year-old. She’s not wrong. Our group was in awe as not one, but three northern brown kiwi nonchalantly foraged for food just a few steps away from their astonished audience.

Living predator-free for close to two decades, they haven’t got much to worry about. Thanks to the efforts of community-based TOSSI (the Tāwharanui Open Sanctuary Society) and the Auckland Council, a 2.5km predator-proof fence was erected across the peninsula in 2004; more than 200 northern brown kiwi were introduced, along with other endangered birds such as takahē, kākāriki, kākā and tīeke saddleback. Now the place is teeming with native wildlife.

“We always see roosting kererū and I have my resident ‘Pete the Pigeon’ who sleeps on the same branch above the trail each night. There are plenty of ruru, which can be hard to spot but I love pointing out their different calls and, especially in the summer months, the kākā, which are very noisy parrots.”

Add to that a slew of New Zealand tree wētā, eels, wetlands and native forest, there’s plenty to look at. 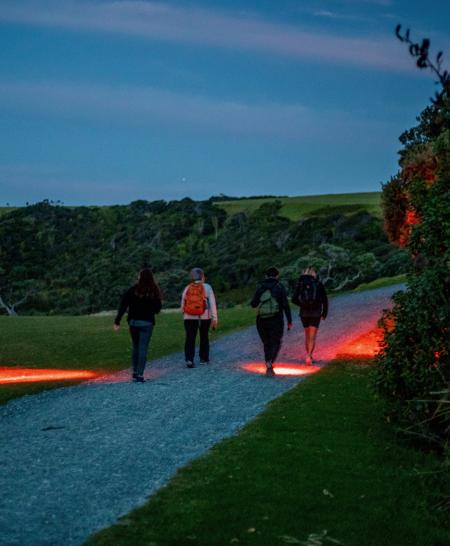 Heading out to spot kiwi. Photo by Lola Media

Visitors are picked up from Matakana Village and, before the night walk begins, treated to a stroll along the Tāwharanui coastal headlands for hot chocolate and cookies at the sanctuary hut, where Ness shares a history of the park and those residing in it.

This guide knows her stuff. Her dad Colin has only recently retired after 38 years as a Tāwharanui park ranger; Ness lived on site in the ranger’s house until she was 10. After that they moved up the dirt road a few kilometres to their family farm at Christian Bay. Her childhood backyard was a playground of rolling farmland, bush and some of the country’s most spectacular beaches. “We had a pretty amazing upbringing, with all the beautiful beaches and bays at on our doorstep. It’s fair to say my siblings and I were never bored.”

But it wasn’t until Ness left to explore the rest of the world that she truly understood there’s no place like home. “I went overseas at 18, first to the mines in Western Australia and then to Ireland where I worked in outdoor education. From there I moved to Queenstown and spent six years working as a hiking and tour guide. That’s where I launched my first tour company.” Eventually, yearning to showcase her own backyard, she returned to Matakana and rebranded her tour company Kiwiness Tours: Matakana Coast Tours and Transport.

“I’ve genuinely never felt so patriotic. This place is a wonderland and I really can’t say I’ve found a more beautiful beach than Tāwharanui in all my travels. “I’m definitely a chip off the old block. Dad has inspired a love of nature, people and the local area, so I know I’m in the right place.”

When Covid hit, Ness remained resolute, working as a fencing labourer during the lockdowns to pay the bills. “Outside of lockdowns I’ve been busier than ever. I’ve had great feedback and lots of my tour bookings are through word of mouth. It’s a good feeling knowing that people recommend my tours to friends and family.” Why does she reckon Kiwiness Tours are such a hit?

“We are so close to Auckland and people are keener than ever to explore close to home. Plus the best way to travel is always with a local!”

Reported by Vanessa Trethewey for our Autumn 2022 issue