Welcoming locals give Monica Tischler a deeper understanding of life in Italy and Austria.

Olive trees cast a silver shimmer across rolling hills that glow under a burnt-amber sun. Perhaps it’s the sun, or another special ingredient, I wonder, that makes the people of Italy radiate warmth, too.

What’s it like to run a Tuscan vineyard? Travellers rarely have the opportunity to sit with Italian winemakers over a glass of their latest vintage and I’m grateful for the chance to be doing so. It lets me experience Tuscany on a deeper level.

I don’t think I would get this feeling of connectedness if I were travelling solo. I’m part of a Join Trafalgar tour of Italy and Austria, and on it I’ll meet locals and learn about what makes them tick. I get a closer look at their lives than most travellers would.

Gian Luigi Lenzi, his wife Pamela and their daughter Diana put on a feast in the barrel room of their 16-acre vineyard, Fattoria di Petroio. Between mouthfuls of Diana’s delicious home cooking, I chat to her about how she found herself at the helm of her family’s wine estate.

After completing a political science degree, and later graduating from chef’s school, she followed her mother’s motto to ‘Learn as you go’ and threw herself into the family business.

“This is our legacy and it’s something we all believe in; it’s home,” Diana says. 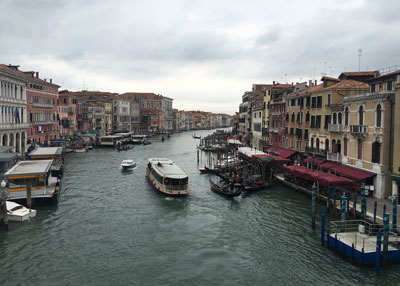 My journey had begun in Rome. Early in the day, I wandered the ancient streets, getting my first taste of Europe. I joined the hordes of other tourists and pointed my camera at the intricate detail of The Vatican City and the crumbling limestone walls of the Coliseum. I threw a tiki over my shoulder into the Trevi Fountain and made a wish. I bought fresh strawberries from a market and smiled as I wandered cobbled streets lined with flowering cherry blossoms. It wasn’t until later that evening, exchanging conversation with a local
in his living room, that I began to get a feel for Roman life today.

The warmth of Fabio’s apartment is welcoming. Chefs prepare a feast in the open-plan kitchen. Fabio pops the cork on a bottle of red wine and tells us about life as a professional chef and life on Rome’s Tiber Island. As darkness pulls a curtain over daylight, I feel closer and more connected to the city.

It’s impressive the speed at which the antique loom is worked to transform thousands of threads into a traditional piece. I’ve travelled from Rome to Perugia, arriving at the quaint Church of San Francesco delle Donne, one of the oldest Franciscan churches in Italy. The woman behind the loom is Marta, a local who’s dedicated to maintaining the art of hand-weaving textiles. Inside the stone church is Marta’s workshop and her handiworks adorn the walls. Weaving is an art close to Marta’s heart and was passed down to her through generations of women in her family. It’s one of the few traditional frame hand-weaving workshops left in Italy.

Heading northwest into Tuscany I run my fingers over a beautifully woven bookmark, made by Marta, and hope that her craft survives for years to come.

The scale of Italy’s ancient history doesn’t quite register until one is here, gazing across medieval hilltop villages or stepping around ruins among grapevines. I pass Lake Trasimeno, where the Battle of Trasimene took place 217 BC when Hannibal defeated the Roman army. Many Roman troops drowned or were massacred in the lake and old buttons and jewellery from the fallen soldiers have been discovered in the lakebed in recent years. It seems Italy is an historic treasure chest bursting with gems.

Stalls filled with cured meats, cheeses, breads and pastries spill onto uneven streets in San Gimignano. Flowering wisteria and pots of hydrangeas inject vibrant hues of purple. There’s another drawcard here: the world’s best gelato. I join the line at Gelateria Dondoli and the wait for the unique, refreshing flavours of 'Rosemary Baby' is worthwhile.

Cobbled streets are replaced with narrow canals in Venice. A glassblower transforms hot, liquid blobs into a beautiful ornament in the shape of a horse, and locals pick up fresh market produce for the week in the bustling St Mark’s Square. A coffee at a quiet café tucked down an alleyway provides refuge from the hustle.

En route by boat to Burano Island, I gaze back at the layout of Venice precariously dotted along the edge of the Grand Canal. Stepping ashore, the bright buildings make me smile. I wish towns were painted in rainbow hues more often. Burano is famous for its delicate lace making. Dainty white dresses, table clothes, napkins and handkerchiefs adorn shop fronts and flutter in the late-afternoon breeze.

“We’re called sisters because we reach our hands out to people in need; we help them lead a good life, but what we give, we get double back,” says Sister Johanna, as we wander the monastery grounds of the Missionary Sisters of the Precious Blood in Villach, Austria.

It’s merely a two-and-a-half-hour-drive north into Austria from Venice, yet the landscapes couldn’t differ more; it’s spring but a light dusting of snow is cast upon the peaks of towering mountain ranges surrounding the convent. Sister Johanna talks about the work of the Catholic women’s order. She says the sisters are dedicated to bringing peace and justice to the world by supporting the education of women and children, and providing Sryian refugees with shelter, food and clothes.

As I listen, I realise that travel opens the mind to new customs, traditions and ways of life but it’s the people met along the way who touch the heart and stir the soul. I’m grateful for the good company.

Reported by Monica Tischler for our AA Directions Summer 2017 issue

The writer travelled courtesy of Trafalgar.

Join Trafalgar launched its first 'Be My Guest' experience in 2010, an initiative to give travellers a richer experience, including meeting locals like Fabio and the Lenzi family. Through its initiative TreadRight,  Join Trafalgar invests in local communities, supports crafts and preserves local heritage, such as Marta’s and the work of the Missionary Sisters of the Precious Blood.

Visit AA Insurance  to make sure you're covered on your travels.