Jo Percival explores Brisbane and the Gold Coast on a Trans-Tasman bubble break.

Fortitude Valley in inner-city Brisbane is undergoing a renaissance. Streets that were once too dodgy to walk at night are now gentrified, lined with tidy Queenslander-style houses. On the über-chic James Street, glass-fronted boutiques stuffed with ruffles and sequins and beautiful expensive things sit alongside huge Moreton Bay fig trees encrusted in fairy lights. 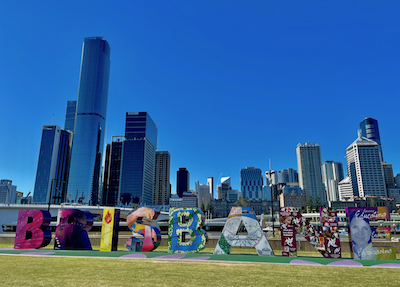 The best way to explore a new city is on foot or, for a more efficient option, e-scooter. Having never ridden a motorised scooter before, I walk the streets finding myself envious of people whizzing past me. So, with no small amount of trepidation, I download an app, scan and step aboard the next orange scooter I spot. I wobble down the footpath white-knuckling the brakes until I find my groove. Soon, I’m covering ground at twice the speed.

From James Street, I zip to New Farm, a leafy, pretty suburb on the edge of the Brisbane River. On a crisp winter's day, New Farm Park is bustling with prams and cyclists and dog-walkers.

People sit lizard-like in the sunshine. A cacophony of crows play sonic ping pong between the trees.

I tag off my scooter and board one of the many ferries criss-crossing the river, shuttling people from berth to berth. We cruise past the feet of tall apartment buildings and office blocks in the central city and under the impressive Story Bridge.

Like Fortitude Valley, Howard Smith Wharves at Story Bridge have been recently revamped as a dining precinct. The star of the show is Felons Brewery; stretching for nearly a kilometre along the wharf, the brewery has multiple dining and drinking areas – from boardwalk bar stools to astroturf lawns dotted with ibises (aka bin chickens) and, on Wednesday evenings, beer-drinking yogis. 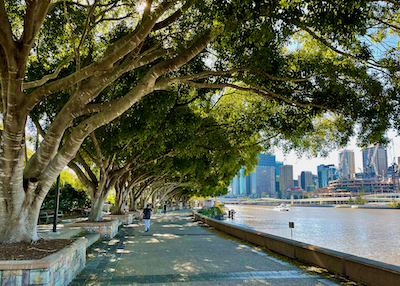 Opening in 2018, Felons’ claim to fame – aside from their tasty beverages – is as the brewery that ran out of beer. On their grand opening weekend the brewers underestimated the scale of the crowds who literally drank the premises dry.

The riverside promenade snakes along wooden boardwalks and paved paths, winding past ferry berths, parks, restaurants and cafés. It’s easy to visualise Maiwar (the Brisbane River) as the serpent from Aboriginal legend, twisting below skyscrapers, carving its way towards the sea.

At Southbank, the white sand and jewel-like tones of the human-made lagoon at Streets Beach look deceptively tropical on a chilly afternoon. One hardy child splashes in the shallows, but the lifeguards don’t have much to watch today besides seagulls.

From the expansive cultural precinct at Southbank, Black Card runs walking tours that explore the city through an indigenous lens. Cassy Saunders leads us on an eye-opening and often sobering journey, taking in contemporary Aboriginal art and digging into the history behind each piece.

Some of this history, riddled with appalling stories of European colonisation, seeps uncomfortably close to the present day. Gavin Fenelon’s riverside sculpture Cell tells how Aboriginal girls were removed from their families to be trained as servants, stripped of their culture, their language and even their names. This was as recently as the 1970s.

Outside the main entrance of GOMA – Brisbane’s gallery of modern art – we admire Tow Row by Judy Watson, an Australian Waanyi artist siting pride of place. It’s a traditional Aboriginal fishing net, made from rope and dipped in bronze; organic shapes and indigenous heritage preserved for all time.

Later, I find Agnes. Tucked on a side street in a converted brick warehouse, Agnes restaurant is dark and intimate. Here, there is no oven, no gas and no electricity for cooking, just fire. I choose charred cucumbers and hay-roasted mussels with wilted sweet potato leaf. The flavours are innovative, surprising, unlike anything I’ve experienced. 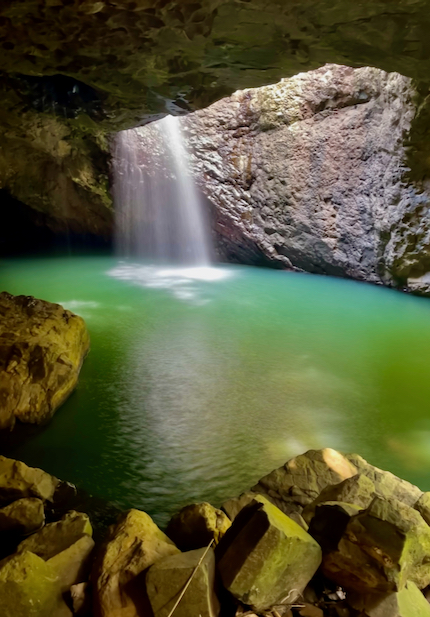 Having had my fill of cityscapes, I venture south from Brisbane to the Gold Coast hinterland, driving through the sleepy rural settlements of Numinbah Valley and on, through Springbrook National Park, to Natural Bridge.

An unusual rock formation in the base of a river valley, Natural Bridge is created by the stream carving its way through the roof of a large glowworm cave, forming a waterfall that spills into the deep, green water.

On a cool morning no-one else is around and I absorb the stillness of this magical spot. Birdsong, like crystal water drops, rings through the trees.

Nearby Scenic Rim is aptly named – a territory defined by the edges of an ancient caldera, where the road coils around steep, eucalyptus-clad hills. Scenic Rim Equine Group, home to 30 placid horses, provides the perfect mode of transport for full immersion into this landscape. We amble into the gorge, the horses daintily picking their way through the rocky track. From the ridge, the green gum forest gives way to the glittering shards of the Gold Coast’s skyscrapers beckoning irresistibly on the horizon. Beyond them, the ocean; blue and forever.

Close up, the Gold Coast is like Mount Maunganui on steroids; bustling, vibrant and unashamedly flashy. It’s a collection of resort towns filled with sun seekers, party people and holidaymakers. There’s a hint of recklessness in the air. People are here for a good time, not a long time.

In Surfer’s Paradise, the brand new HOTA Gallery – the largest public gallery outside a capital city in Australia – opened in May 2021. Featuring colourful, contemporary and thought-provoking works in a sleek building, it’s worth the time spent indoors.

The inaugural exhibition – SOLID GOLD – showcases work from local artists who have captured the evolving abundance of the Gold Coast, from a lace interpretation of the Nerang River made from re-purposed single-use plastics to a simulation of sunshine made from glowing LED lights. 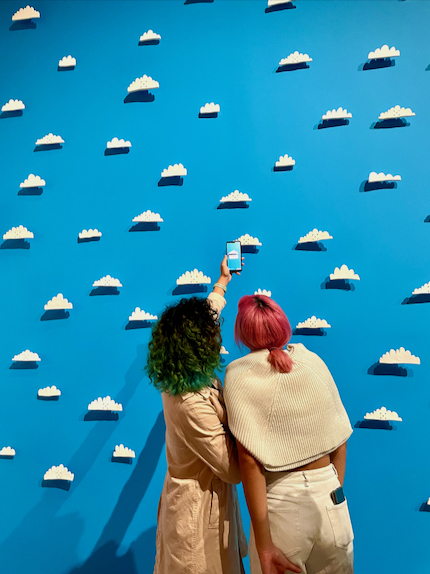 Another thoroughly modern, interactive work, Cloud Drive, makes use of our ubiquitous smartphones.

By downloading an app, my phone becomes a key component of the piece; holding the screen up to the ceramic clouds reveals insightful quotes and melancholy messages.

Of the many towering structures that march along the Queensland Coast, the Q1 building at Surfers is the tallest. Higher than both the Eiffel Tower and the Empire State Building, it's officially the tallest residential building in Australia.

Of course, the best way to appreciate this is from the top. Donning a sage-grey jumpsuit and complicated harness, I join a Sky Climb tour to the tippy top of the tower. The actual walk is a short distance – just a 40-metre climb up a set of metal stairs to the viewing platform and back down the other side – but the pace allows plenty of time to absorb the outstanding views.

From the top you can see 86km of coastline – south to the New South Wales border and north to South Stradbroke Island; the furthest you can see without flying. Directly below is the complicated network of canals and waterways; on the other side, that magical golden coast. Even from this height, the sea is so clear I can see to the bottom. It’s far too tempting to resist.

Back on solid ground, I make a beeline for the beach. Kicking off my shoes, the sand is like cool silk under my winter-soft feet. Nearby, implausibly-tanned players in small scraps of lycra compete in a beach volleyball competition. I sit in the warm sunshine while salt water dries to a film around my ankles and gaze to the coastline that curves to Coolangatta in the distance – the end of the Gold Coast.