Wairarapa: over the saddle

Liz Light takes the high road to the Wairarapa.

The hilly grassland above the Manawatu Gorge is densely planted with wind turbines; 286 of them on three adjoining wind farms.

It’s not just their immense height that is impressive, the tallest being 70m, but the tapered whiteness of the towers and the massive, finely curved, pointed, turning blades. They are elegant and speak of smooth, streamlined efficiency as the breeze-facing blades whirl with a low thrum.

I often admired the ridge-top Tararua turbines from a distance but with the Manawatu Gorge between Palmerston North and the Wairarapa closed by massive slips and remaining so for the foreseeable future, we had to take the alternative route, the Saddle Road. This meanders through the wind farms and there is an off-road viewing area, fully surrounded by the turbines.

Saddle Road is curvy but wide and sealed, so it’s an easy drive, and scenic. Besides the wind farms there are fine easterly views over patchwork farmland to the silvery Tasman Sea and, to the west, of the forests and valleys of the Wairarapa.

On the Wairarapa side of the saddle, perfectly timed for lunch, we stopped at the Tui Brewery. The brewery has been using water from the Mangatainoka River for 125 years to make its legendary beer. These days it’s brewed in nine ultra-modern stainless steel vats.

Tupu, the master brewer, explained that all their beer is pure, with no additives to the traditional ingredients of hops, malt, yeast and water. The markedly different beers, from pale ale to Tui Dark, are created by altering the interaction and quantities of each ingredient.

In the beer garden tui chimed in the flax and the river ran over pebbles nearby. As I was driving I didn’t try the beer but the food was delicious and we could have happily stayed much longer. However, Pahiatua’s aeroplane was calling. 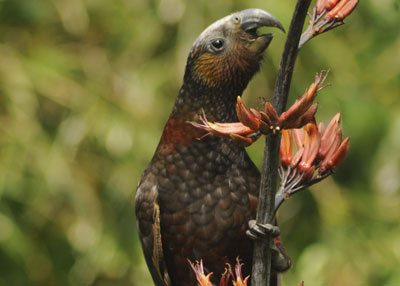 Harvards began as fighter planes during the Second World War but this one has been soaring over Pahiatua’s playground since 1963. It’s on a plinth with a ladder up the side and a slide out the rear giving new meaning to bombs-away. The Harvard Adventure Playground
is smack in the middle of Pahiatua, with the main street dividing in two around it. It’s a sweet town that gives a children’s playground the prime place.

Beyond Pahiatua we turn down a rural road to visit Biddy and Colin. They’re an entertaining double act who have pursued their individual interests with passion and are now famous in their areas of expertise.

Colin has the biggest model railway in the southern hemisphere with 300m of track, a kilometre of electric wire underneath to keep it operational, over 100 locos, and heavens knows how much rolling-stock. This model railway runs around a miniature English town and is housed
in a large barn.

Colin’s project is big but Biddy’s is boutique. Biddy (pictured left) has the smallest commercial dairy in New Zealand. She hand-makes cheeses with the organic milk from the four brown cows that amble around the mixed-herb pasture behind their house. It’s traditional English-style hard cheese, in rounds and maturing for months. It tastes sublime and, to prove it, it sells to New Zealand’s best restaurants and has won World Cheese Awards.

Not far from Eketahuna is Pukaha Mt Bruce Wildlife Centre where a successful kiwi breeding programme has resulted in about 20 birds in the wild and in aviaries. Manukura, a bright moonbeam in the gloomy darkness of the kiwi house, is a basketball-size kiwi completely clad in white feathers. She’s pretty but she was so mean to her boyfriend, chasing and pecking him, that he became stressed and lost weight. The Pukaha team is looking for a more assertive mate for Madame.

Manukura is the star but there are many other native birds. A path passes close to a rifleman’s nest. This tiny, delicate beauty flew in and out of its nest with insects for chicks. Fantails flited alongside us, grey warblers warbled, and high in the canopy kaka squawked and kokako sang their haunting bell-like song.

There is an expansive walk-in aviary where hihi, tui, bellbirds, kereru and others zoom around and come close to those who sit quietly. Pukaha, besides doing a terrific conservation job, is one of few places where you can easily see many endangered native bird species both in aviaries and in the wild. It was an inspiring finish to a happy day spent exploring.

Reported by Liz Light for our AA Directions Autumn 2021 issue

Also known as 'How to Dad’, he's amassed more than a million YouTube subscribers with his...

How can cars and trucks share the road safely? Ben Whittacker-Cook investigates.

Cwmglyn Farmhouse Cheeses & Middleton Model Railway
open to visitors most days of the week; the model railway operates on weekends and public holidays and during school holidays.

Te Arapiki o Tawhaki at Pukaha Mount Bruce
is a four kilometre, two-hour return walk that takes in lowland podocarp forest and offers good views of the region. Access to this track is via the Pukaha Mount Bruce Visitor Centre and an entry fee is required. The Pukaha Mt Bruce National Wildlife Centre is open every day and offers guided tours, events such as eel feeding and there is a café on site.

AA Traveller - for more travel ideas and to book accommodation.