Over the last few years, anyone driving down Auckland’s Northwestern Motorway (SH16) will have seen big things happening at Waterview.

Towering pillars and a network of sweeping on- and off-ramps form a massive new interchange, rivalling Spaghetti Junction down the road.

This marks the northern entrance to the Waterview tunnel, which is the largest roading project in New Zealand’s history and on track to open early next year.

But it’s below the ground where the scale of the work is most impressive. ‘Alice’, an 87-metre-long tunnel boring machine, the tenth-largest in the world, was used to cut two three-lane tunnels, each 2.4km long. During the two-year tunnelling process, 200 truckloads of soil were removed each day, six days a week, as the tunnel reached a depth of 40m.

Of course, it’s about much more than the size of the project, and the $1.4 billion price tag. It’s fair to say that Waterview tunnel will herald the biggest change to Auckland’s transport system since the Harbour Bridge opened in 1959. 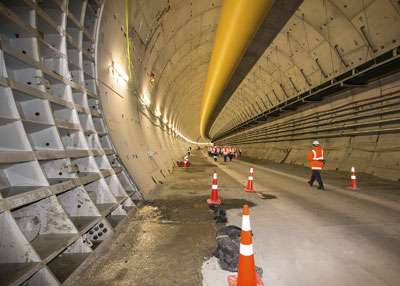 The tunnel will be the missing link in the Western Ring Route, a 48km stretch of highway that bypasses the centre of the city via SH18, SH16 and SH20 (see map). This means people and freight travelling between Northland and the rest of the upper North Island will be able to avoid the worst of Auckland’s motorway traffic. It also means a direct motorway link between Auckland’s CBD and Auckland International Airport, via SH16 and the tunnel. Providing an alternative to the rat-run through the isthmus’ suburban streets will cut down airport travel times by around 15 minutes.

Another big benefit will be a much more resilient transport network.

That’s to say, if and when SH1 and the Harbour Bridge are blocked up, the tunnel and Western Ring Route will provide a genuine alternative.

What kind of traffic flows can people expect? According to the New Zealand Transport Agency’s estimates, the tunnel is likely to be just as busy as other parts of the motorway network. That could mean between 3,000 and 4,000 vehicles travelling in each direction per hour at peak times, so by no means congestion-free motoring.

But the outlook is better for local roads in that part of the city, as a lot of vehicles will choose to drive on the new motorway instead. Key arterial routes such as Gillies Ave, Dominion Rd and Pah Rd will enjoy much lighter traffic flows as a result.

History shows that when you open a new stretch of urban motorway like this, things tend to be pretty hectic for the first while as people get used to the new system and work out the best routes. Motorists should expect queues and heavy traffic initially, but be assured that the flow will improve.

The Waterview tunnel isn’t the only big project being ticked off, though. At the other end of the North Island, the Mackays to Peka Peka Expressway (also called the Kapiti Expessway) is expected to open in the first half of next year. 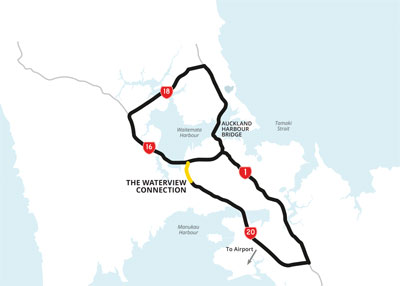 Though it’s just one of eight sections of the Wellington Northern Corridor Programme, Mackays to Peka Peka is a big project in its own right: it’s an 18km, four-lane highway with 18 bridges and a 16km cycleway, walkway and bridleway, with a cost of $630 million.

The project will improve safety on a stretch of highway that claimed seven lives and caused 21 serious injuries between 2010 and 2015. It’ll also shave around seven minutes off driving time between Mackays Crossing and Peka Peka.

Traffic on local roads is expected to drop by around half as a result of the project.

All this is good news for the fast-growing Kapiti Coast region, and for road users in the Lower North Island generally.

Motorists have waited a long time for these game-changing projects and endured a lot of pain during the construction process. Now it’s time to enjoy the benefits of safer, faster journeys and better connections with the places where we live, work, and visit.

Reported by Barney Irvine for our Summer 2016 issue