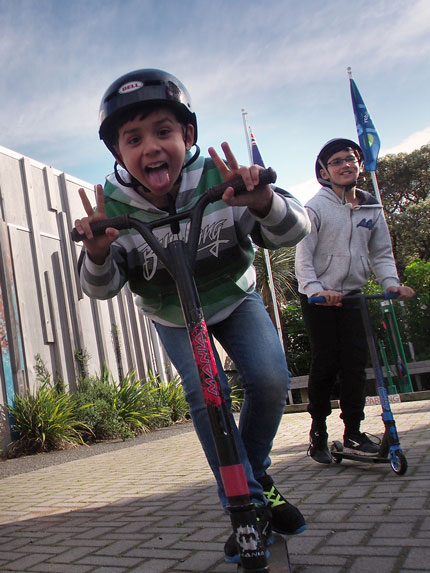 It was dark as we rolled up to our cabin at the Waihi Beach Top Ten Holiday Resort; Auckland traffic had been doing its Friday night thing and it had taken some time to escape the sea of red tail lights heading south.

Because we didn’t observe much of our surrounds on arrival, it was a bit of a surprise to wake up and understand what the receptionist had meant by ‘beachside cabin’. The kids were ecstatic that the sprawling, golden sands were “literally right there Mum!” and ran out in their pyjamas in excitement. We were also ecstatic, but not just about the beach. This was a holiday for us too: we’d heard from friends that holiday parks are amazing for parents needing a bit of downtime, as they’re so well equipped for kids. They weren’t kidding. Why hadn’t we jumped on this bandwagon before?

After a very relaxed breakfast in our little home away from home, it was time for a proper stroll along the beach. Our boys were delighted to discover a wealth of ornate, delicate shells and before we knew it an hour had passed with buckets, spades and plastic bags full of take-home treasure. We needed to explore the camp grounds properly so took a stroll, with the boys speeding ahead on scooters.

There’s nothing better than witnessing the unbridled joy of kids seeing something that really excites them and you would have thought we were in Disneyland, not two hours from home, when they discovered the playground, complete with a giant inflatable jumping pillow. At age 8 and 11, kids start to get a bit discriminatory with playgrounds, but this one clearly made the cut as 45 minutes later, we were still there.

It was time for lunch, so we rustled up some sandwiches in the cabin and spent a bit of time blobbing in front of the TV. I even got to read a chapter of my book. And I got to read another chapter when we went to the pool after lunch. We took turns to read while the other parent watched the kids whoosh down the slide and into the pool, splashing, diving and doing flips underwater. Right next to the pool we noticed a room for under-fives filled with brightly coloured obstacles and bean bags. I felt a slight pang at not having discovered the joy of holiday parks when our kids were younger.

Toddlers are notoriously hard to entertain, and I would have stayed anywhere with a room like that, just for five minutes rest. We also couldn’t help but notice the wood-fired pizza oven by the pool and decided that would be a great idea for dinner. Even though there were a few families with the same idea, it worked well as pizzas only take two minutes to cook in something with that kind of heat. What a genius idea! Kids running around, dipping in and out for hot slices of pizza and Mum and Dad with a cheeky chardonnay relaxing at the tables poolside. Perfect. In that moment we realised one of the unexpected advantages of this stay was giving our kids a little more independence. They could go between the playground, eating area and other attractions and feel quite grown-up, as long as they didn’t leave the park.

We brought breakfast at the local cafe on the beach on Sunday morning, and were surprised when we gave our kids the option of activities around Waihi and they said they’d rather hang out at the holiday park. The boys had spotted a games room with coin operated Foosball and Air Hockey; in our eight-year-old's words “could this place get any better?”

Reported by Alexia Santamaria for our AA Directions Autumn 2020 issue