Inspiration can be found anywhere; I live in Auckland City and only had to cross the Harbour Bridge to find it.

For me, it was a beach stroll, yoga class and a chat to the local barista.

Generous temperatures and pale skies greet me upon arriving in Takapuna.

At Kombi Coffee, a quirky café just off the main strip, I chat to owner Ben Story, who has a thing for Volkswagen Kombi vans. He operated his business out of one in Lyttelton before the Canterbury earthquake in 2011, then below Mount Ruapehu's ski fields; such are the perks of having a mobile store. He decided on something more fixed and moved to Auckland, parking a mint green van in the middle of his café.

Thanking Ben for the coffee, I make my way to the beach, following the boardwalk along the Takapuna to Milford coastal track. The shimmering water is a playground for jetskis, kayaks and paddleboards. Pohutukawa trees form archways and a curtain of purple blossoms drips down the side of a cliff face. I watch a woman salute the sun in a series of yoga poses near the water’s edge. Passing elderly couples, dog walkers, young friends, and families with small children, I see we all have set the same intention for the day: to enjoy the sunshine.

Despite the mid-morning heat, I’m not enticed by a swim but am eager to get out on the water.

I hire a paddleboard from a van on the main beach front. Gently stroking the paddle through the calm sea makes for a therapeutic adventure and gives me a different perspective on the landscape. 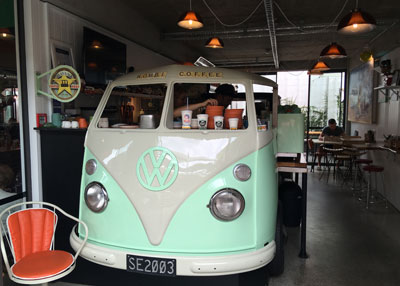 After an active morning, I’m hungry and am spoilt for choice with lunch options. I decide on Regatta and sit out on the sunny veranda enjoying ocean views and mouthfuls of fish.

Seeing the woman practise her yoga on my morning walk motivates me and I’m pleased to discover there’s space for me in a yin yoga class led by Golden Yogi owner, Erin O’Hara. The session leaves me feeling energised and rejuvenated.

I chat to Erin after class and find myself in the company of yet more inspiration. At 17, she was diagnosed with glandular fever which led to paralysis in one leg, severe headaches and chronic fatigue. Falling sick drove Erin to take charge of her health and well-being; she spent a few years rebuilding her health and went on to pursue racing on the professional triathlon circuit. Since recovering from sickness, Erin’s dedicated her life to yoga and meditation to stay fit and healthy. I leave Erin’s studio vowing to do the same.

I meet a friend on the beach just as the sun dips below Rangitoto, casting an amber glow across the beach. Families are still out and about, swimming and making the most of the last hours of daylight. We pass two youngsters, both about ten years old, singing and dancing with so much vitality it’s as though they’re entertaining the masses on an international stage.

“If only we could bottle up their enthusiasm for life, we’d sell it for millions,” my friend says.

I’d suggest to anyone wanting a dose of energy and happiness that they simply visit Takapuna themselves.