I was dancing by the river and lost an earring but didn’t realise until I was back at my slab hut.

I mentioned it to Smithy and he said he’d keep an eye out for it. Well, he arranged a metal detector, found the earring, put it on a bus to the town I’d moved on to, and had the driver find me to hand it over.  That sums up the hospitality in these parts.

‘These parts’ is Outback Queensland. Way out back: two and a half hours’ flight or two days’ drive from Brisbane. Lots of people drive motorhomes to Longreach but we flew, and stayed in beautiful little slab huts made in the spirit of shearing quarters, with corrugated iron on their roofs and gaps in their planks to let starlight shine through.

‘These parts’ are good at stars. The night of the dancing and the lost jewellery, Smithy gave us a ride back to the huts. He swerved out into the empty edges of town,
had us stand out in the night and look up and out at a zillion stars shining more clearly, surely, than anywhere else on the planet.

Longreach is good at drought, too. When we visit, there’s been no rain to speak of for several years. Struggling farmers have become tourism entrepreneurs. Among them, the Kinnon family, who built the slab huts, hosted us on the river banks for a meal and a show one night, and also run the Cobb & Co experience in town. That involves exhilarating horse-drawn carriage rides, a ‘tent show’ and tea served with scones by folk dressed in old time finery. Dusty horses and a little blue heeler watch us eat.

Even in the shade it is mighty hot.  The show only runs between April and October – after that, it gets too hot.
Two evenings, looking for a breeze, we spend on the river, although it’s not really a river. It’s a water hole. Along its banks are eucalyptus, river tea trees, knot weed. High up, whistling kite nests perch in chaotic messiness. Wildlife watchers love this part of the country with its kangaroos, turtles and many various birds.

One day we go to a reserve near town with bush walks loaded with pioneer and indigenous history, geology and stories. We drive across the flood plain where dried-up streambeds wait for rain. Farmers have stopped waiting.

We drive along a skinny road; whenever someone bigger than us comes toward us, we pull right off the road to avoid getting a stone through the windscreen. We pass tough, cloudy gidgee trees. We cross a cattle stop and without any change in the landscape we’re, apparently, on Strathmore Station, home of the Pierce family.

To supplement the business of keeping the farm going, Maree and Bevin let nosy tourists like us take a look around, have a chat with them and share a cuppa in their homestead. We drive around the property, marvel at its flatness and sameness. It is alarmingly dry. There is beauty though, in the muted colours. The station has around 70,000 acres all up and used to run 12,000 sheep and 2000 cattle, but today there are 60 sheep and four horses. Maree’s thinking of moving the horses off.

We drive out to a dam, otherwise known as a turkey nest, look out at the wide, cracked expanse. A small gang of emu stop to watch; we poke around bleached bones, check out the windmills. One of our party lies on his back and kicks his legs in the air like a very, very bad break-dancer. He hopes the emus will be intrigued by his odd behaviour and come closer. They don’t. It’s pretty funny, though – he gets a laugh. 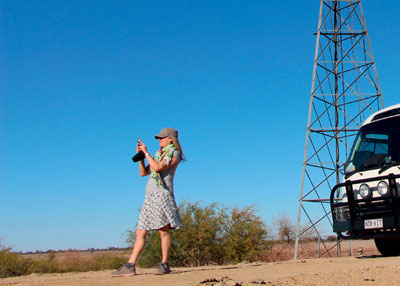 Maree talks factly of the hard times. You can’t take on this sort of land without an above-average quota of stoicism.
In honour of this truth, we visit the Stockman’s Hall of Fame. Busy with old tools and saddles, Flying Doctor displays, stories of heroes and settlers, wagons and huts, buggies and wool presses, images and stories of Australian bush stations. There is also a relatively new archive of interviews with indigenous stockmen and women; one of them talks poignantly about the Akubra hat being worn like a crown.

We travel to Winton in time for an evening tour to the ‘jump up’ to toast the sunset. It is reminiscent of Picnic at Hanging Rock. The red sky streaks across the wide horizon, unhindered; the messa is bone pale, stark and mildly spooky.

From Winton we join a tour to Lark Quarry for the day, to see dinosaur footprints. Yes, dinosaur footprints. The theory is that there was a stampede by four or five species of dinosaur on this spot and, soon after, a geological event which captured the prints in mud, preserving them. Today, 95 million years later, we get to peer over the handrail of a walkway built around a covered area the size of a netball court; it’s incredible.

The landscape is surprising, too. I relax in the tour bus and watch it change from being flat and bare, to undulating and covered in grey-blue foliage. Sometimes there is dusty orange dotted with tall, tortured trees, sometimes the view is filled with low, brushy bushes. Pale yellow swirls of mud are edged with red. Between spinifex and ghost gums, shadowy tracks cross the dirt.

The spinifex looks so sweet – round and soft and cushion-y but it is spiny and sharp, providing protection for small creatures. As far as the eye can stretch it’s a crusty pan with a silvery skin, baked tight. But it’s not dead land, not at all. It’s dry and drained and hard, but under the surface is seed and up the sucked-in trees is a clever preservation system at work. Once it rains, it will spring back; it is energetic land, merely hibernating.

We finally get to the Australian Age of Dinosaurs, where dug-up dinosaur bones are exhibited and analysed. They’ve been finding bones here since the 1930s. In the lab, photos show the enthusiasts at work, their wiry bodies shaded by hats, bent over unbelievable bones, including some so big they took three years to dig up.

Every year the team here undertakes a three-week dig which amateur palaeontologists can join in on, paying to learn preservation techniques and then helping with the careful business of retrieving bones. Yes, there have been Kiwis join the scheme. This world of real science is irresistible to certain types of people. 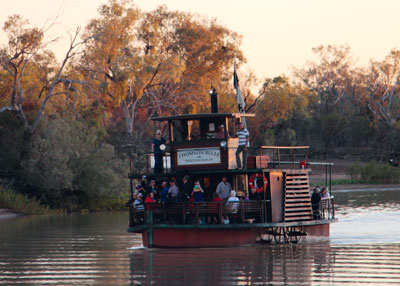 As we drive to Mt Isa the next day, I consider the various experiences had and realise there is a lot here for a certain type of traveller.

Those who like to shop, indulge in wine tasting or lounge about by pools might not warm to this place. But for those who like to learn as they go – exploring the bush and outback farms, visiting Longreach’s Qantas Founders’ Museum, seeing dinosaur bones up close and, in Mt Isa, going underground for a taste of being in a mine –this territory offers a lot. Plus, they’ll have the company of welcoming, loquacious, generous locals.

Speaking of which, if you bump into Smithy, say g’day from me.