The Audi S3 Sportback is a premium compact performance car that has been a class act over its twenty-year legacy.

Our test model was finished in a beautiful stand out shade called Ara Blue. Ara Blue is an excellent contrast to the darker accents that peppered the exterior.

This Sportback delivers a new sharp German exterior and premium connected interior design. You also benefit from the driving dynamics Audi are known for and a host of innovative technologies such as Audi connect®. 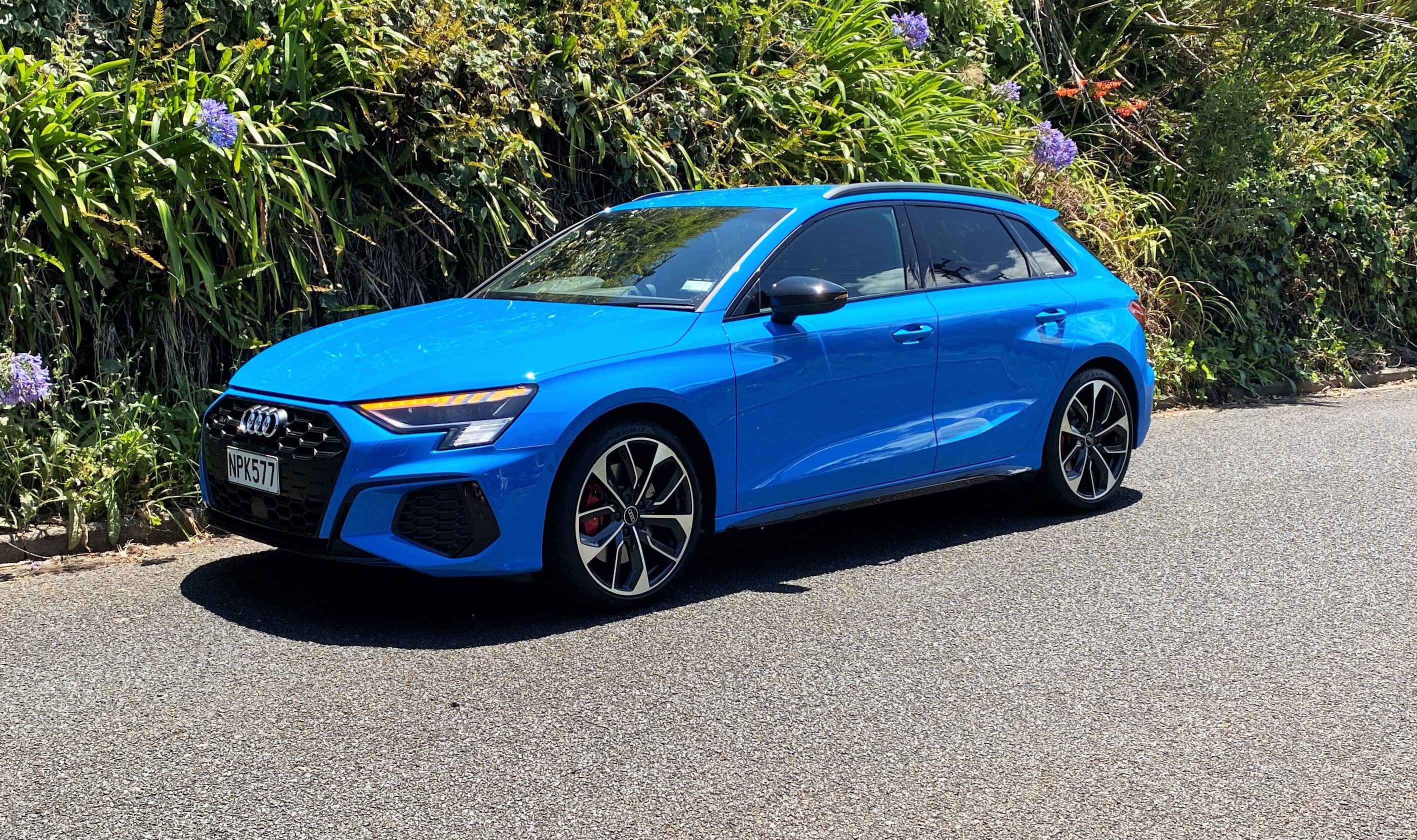 Just like the A3, the S3 is a premium hot hatch but it elevates the experience just that bit further while still offering everyday appeal and versatility.

The new S3 Sportback is an engaging design. Initially you are drawn to the front, which is dominated by the single frame with its large rhombus-patterned grille flanked by two sizable air inlets, while the housings of the exterior mirrors have a classy blackout look.

The shoulder of the body extends in a strong line from the headlights to the rear lights, and the areas below are curved inward – a new element of Audi’s design that places a stronger emphasis on the wheel arches, which are similar to the quattro blisters found on Audi’s RS models. There are also handy slimline roof rails, which make trips to the mountains easier.

The all-digital daytime running lights comprise of a unique pixel array made up of 15 LED segments, ten of which form two vertical lines, giving the rear a wide stance. You will also discover the large faux diffuser and the four exhaust tailpipes that underscore the sporty tough look.

When compared with its predecessor, the 2022 S3 Sportback has grown. It’s now three centimetres longer at 4.35-metres, and three centimetres wider at 1.82-metres. The interior offers more shoulder and elbow room too, however, this doesn’t mean that the luggage space has suffered unnecessarily with a capacity of 325 litres still at hand - depending on the position of the rear bench seat. This can expand up to 1,145 litres, which is great considering the overall dimensions of the vehicle. 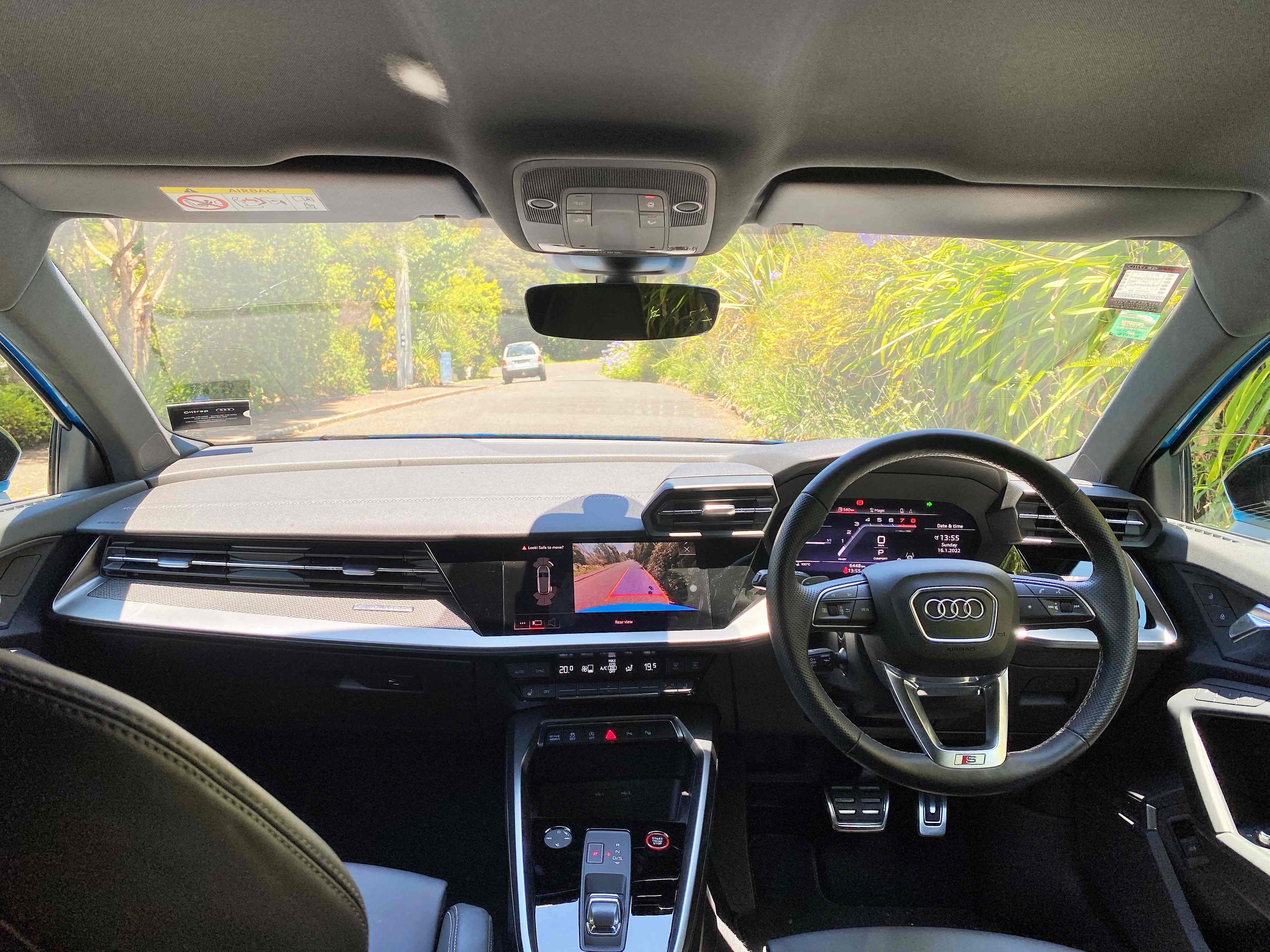 The interior continues the racy slick style of the body, with neatly integrated dark aluminium inlays, and sharp, angular styling. The S3 also features heated electric Napa leather seats that are beautifully finished. The instrument panel is nestled in a high gloss black surface; however, these are tastefully executed and aren’t over cooked, so you won’t be blinded.

Cockpit space is driver centric, and we found familiar elements from larger Audis we have reviewed in the past. For example, the crisp 10.1-inch MMI (Multi-Media Interface) touch display as standard, which is neatly integrated into the centre of the instrument panel.

The MMI system recognises letters drawn manually on the screen and provides acoustic feedback and can also be controlled orally. The instrument cluster, which the driver operates via the multifunction steering wheel, is also digital as standard.

Essentially MMI is the system that is responsible for all tasks relating to the car’s audio. Tasks such as communications and navigation functions. These include telephone and Audi connect services, and it’s integrated Wi-Fi hotspot.

The Audi virtual cockpit screen measures 12.3-inches diagonally, and offers three different views, including a large display of the navigation map. Route guidance is flexible and accurate, while navigation can offer high-resolution satellite images from Google Earth and traffic information.

The latest MMI is powered by the new third-generation modular infotainment platform. Its computing power has received a bump now ten times higher than its predecessor, so this means little lag during its operation.

The S3 uses a 2.0-litre, four-cylinder TFSI engine that produces an additional 88kW over the A3 Quattro - blessing the driver with a rambunctious 228kW and 400Nm of torque. This equates to the ability to dash from 0-100 in a mere 4.8 seconds.

For added power and efficiency the injection system runs at a high 350 bar of pressure, and it utilises an Audi Valvelift System (AVS) for variable valve control. The fuel consumption is rated at 7.4L/100k with a CO2 output of 170g/km - this is better than we expected for this Autobahn worthy model.

The driver can use the Audi Drive Select system to make the sound of the powerful four-cylinder turbo engine even louder. And the seven-speed S tronic transmission can sharpen its shifts, all while the Quattro all-wheel drive delivers the torque dutifully to the road.

A hydraulic multi-plate clutch, in front of the rear axle, is also fully variable and moves between the front and the back as required, giving a very sure-footed feeling even on twisty roads.

Audi Drive Select is cared for by the modular dynamic handling control – a new system that closely links the Quattro drive to the Electronic Stabilisation Control (ESC) and the controlled dampers.

Driving the S3 takes things to the next level in terms of performance, although the adaptable suspension means a more flexible ride, especially if you are running simple errands.

It’s really the icing on the cake after stepping out of the A3 Quattro, which we were more than happy with. The added power and sports adaptive suspension are well worth it if you are looking for a compact classy car that can handle roads with style and grace. The brakes are also fantastic and can restrain all the power with ease.

The new Audi RS 3 Sportback oﬀers impressive performance all along the line. Its powerful design, outstanding...

With its combination of electric drive and a comfortable, sophisticated interior, the Audi e-tron creates a new...

In a world dominated by SUVs and Utes it’s refreshing to step into a car like the...

The new Audi A5 is a subtle update from the previous generation that effortlessly retains the perfect...