Infiniti’s a new brand in New Zealand. Launched in Auckland and Christchurch, it delivers a range which aims to sit above the mainstream.

But only part way. Sure, they both launched in 1989, and both were aimed initially at US buyers. But hop into a Lexus and you’ll discover there’s more to it than simply a tarted-up Toyota. Hop into this QX30 cross-over and you’ll get a few derivative flavours, and not just Nissan ones. Yep, there’s more than a whiff of Mercedes about some of this switchgear, which if you thought this crossover was just a Nissan X-Trail in drag, will cause some confusion. 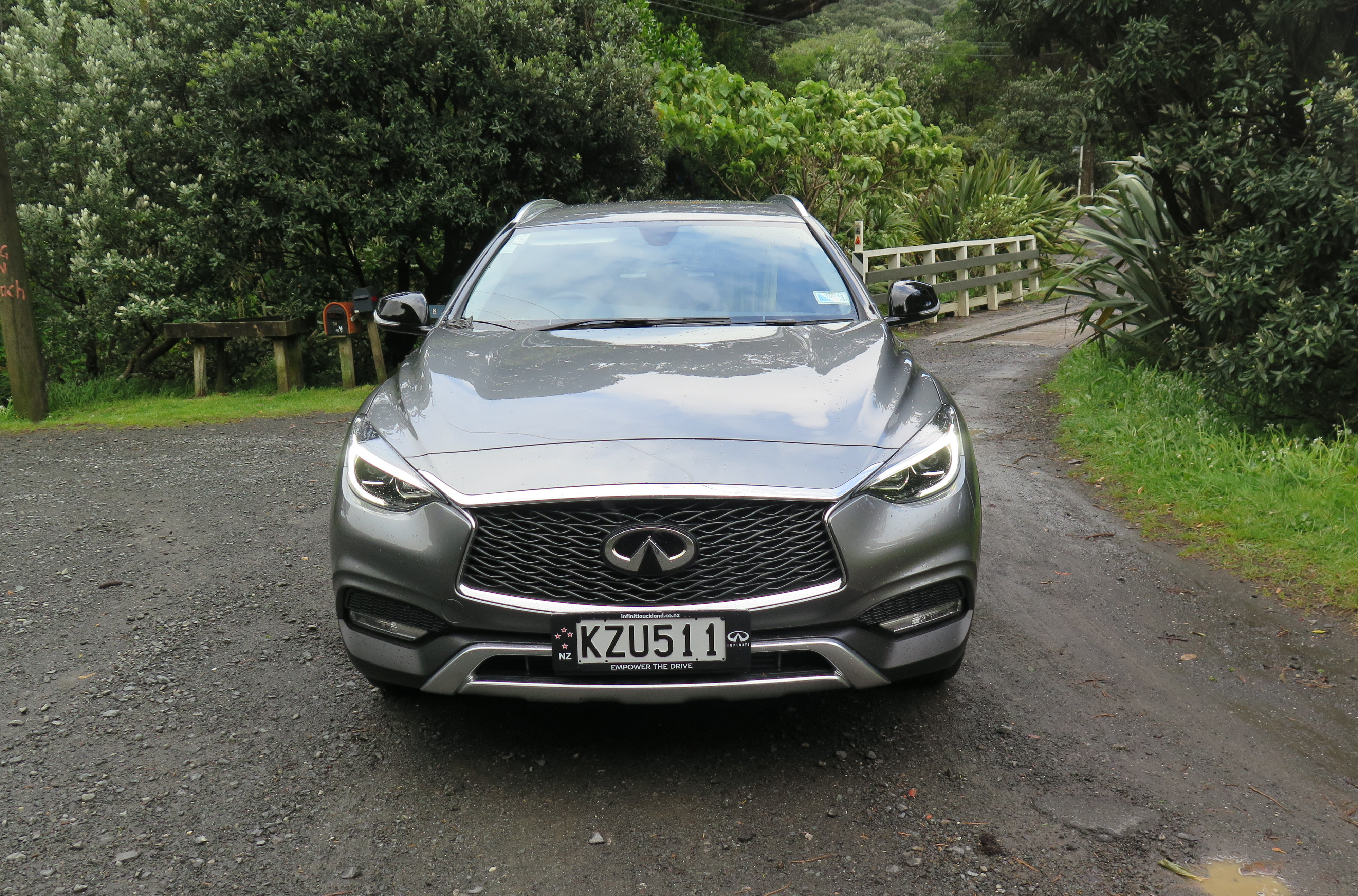 The QX30 arrives just as the medium SUV segment is booming, but it’s actually based on the Q30 hatch, which is based on – yes, you guessed it, a Mercedes, the GLA. Mercedes? Yup, and there’s more to that relationship than this – don’t forget the X-class Mercedes ute is based on a Navara.

This car has almost the same body and cabin as the Q30 hatch, but rides about 30mm higher, gets its own unique suspension set-up, all-wheel drive, and a seven-speed auto that’s also come from Mercedes. Not surprising then that the gear lever looks and feels like a Merc’s, as do the steering wheel-mounted stalks, with the indicators and wipers on one to your left above another managing cruise control – yes, just as in a Merc you’ll initially hit the wrong one.

This may be a soft-roader, and may drive all four wheels, but it still feels like a hatch – albeit one with a great view out. But it’s a hatch with compromises. You might associate ‘SUV’ with ‘extra cabin space’ but here you’d be wrong, as the rear seats are a touch more compact than we’d expected. 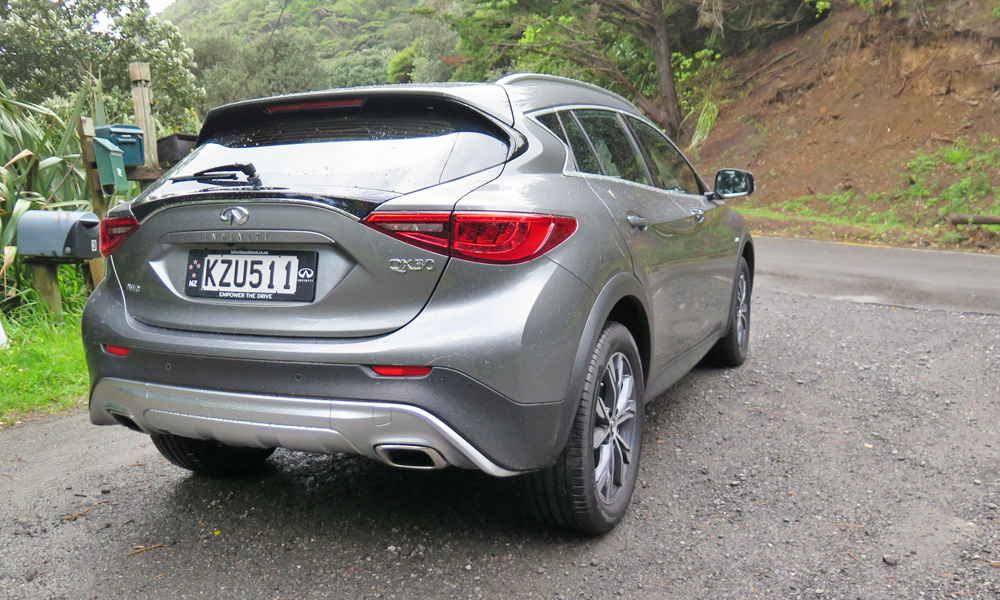 However handling is more confident than you might expect from a higher-riding SUV, and naturally it proved sure-footed in even slippery early spring conditions, given the all-wheel drive. The engine seems perky enough, if not stand-out, indeed the drive experience could be described as pleasantly competent, the minimum expectation for a luxury brand’s SUV, even if it is the base model.

Overall we found QX30 a touch disappointing. It’s priced a bit high for a standard hatch, yet it never quite feels luxurious in the way a Lexus does, or even an entry-level BMW or Mercedes. To a tester used to a wide range of models and brands, the cabin is a bit of a bitsa – admittedly something the average buyer won’t have a problem with. Your subconscious is hardly going to expect a Merc control over here just because there’s one over there if you’ve not driven a Merc before.

And even the up-market side tried just a little too hard. That piano-black interior finish, for example, contains a scattering of glittery flecks which initially looked like dust – until a wipe didn’t move them, a great idea that didn’t quite work for us. And the seat adjustment is electric for lumbar – but manual for the back and base, while the air con is also manual in this GT, which feels a little cut-price.

It certainly looks sharp though, it’s comfy, and it packs bit of kit, though as this GT is the base version, the seats – with their two/one split fold mechanism to enlarge the boot – just get fabric trim, albeit with a nice line in contrast stitching. 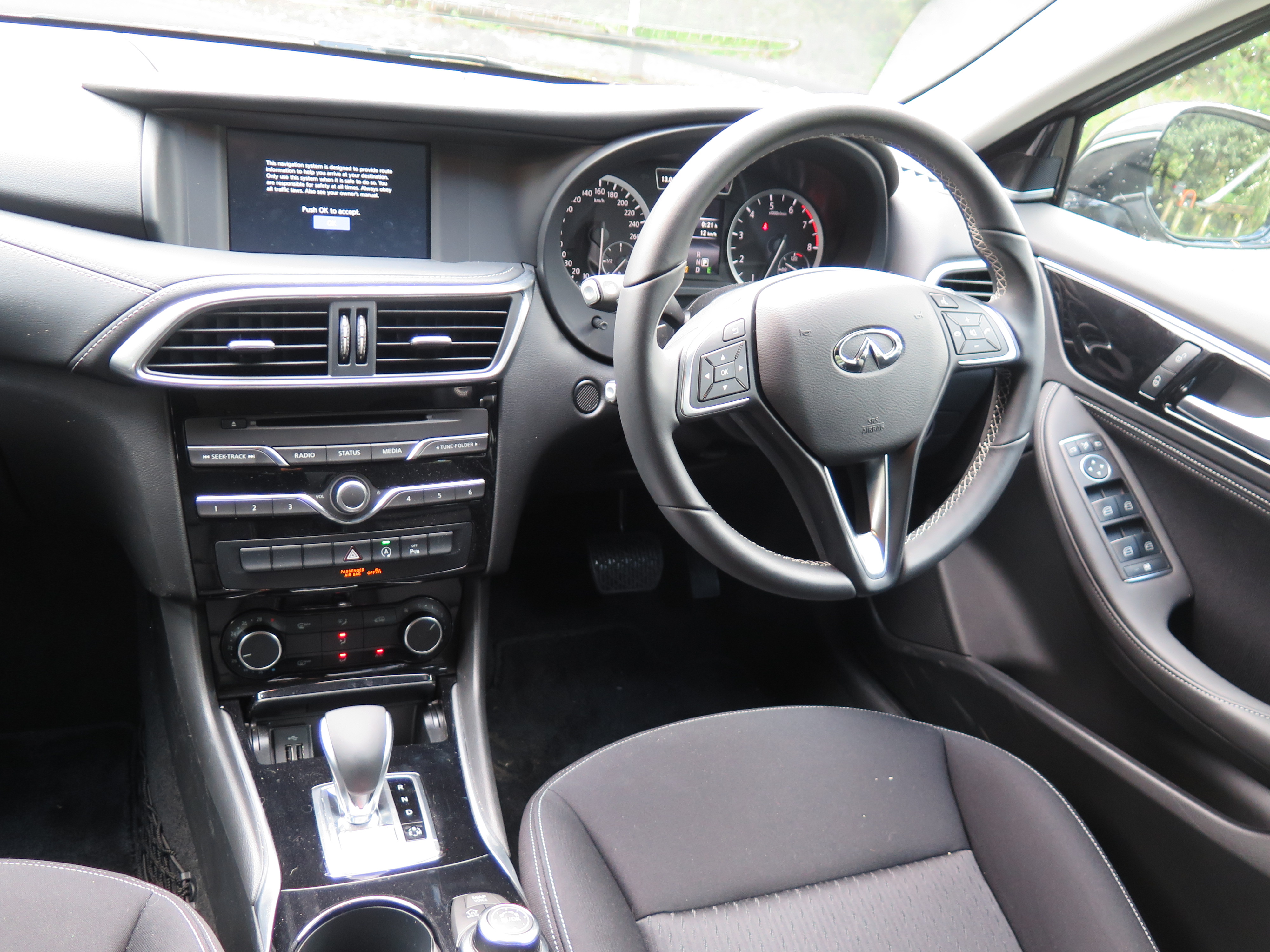 But you do get a 10-speaker Bose sound system with active sound control, and satnav, plus two USB ports, voice recognition and Bluetooth hands free, heated mirrors, a glass roof, rain-sensing wipers, three 12-volt power sockets and a wide array of electronic safety features – the QX30 has not yet been crash tested, though the standard Q30 hatch did gain five stars.

Infiniti has a long road to hoe to gain the kind of brand recognition now enjoyed by Lexus. Certainly this QX30 will suit the current market: it’s smart, it’s comfy, capable, and enjoys a whiff of luxury, plus it’s got the big advantage these days of being a mid-size SUV. But whether it has the presence at this price to pull folk from more traditional luxury brands remains to be seen.

And it really does have ability, via pulse-raising acceleration and the sort of handling no car this comfy has a right to, even if it does very occasionally feel a little too grown-up for our tighter back roads – while remaining just as capable of refined and luxurious cruising. Impressive.

This fourth-generation Mercedes GLE – the first-gen is better known as the M-class – launched back in...

It’s all very well testing a vehicle like Ford’s Endura with the work commute or school run,...

SUVs make up the most popular bracket in NZ at present, so popular that brands have to...

Tempting though it might be to wonder if there’s really space for yet another SUV on the...